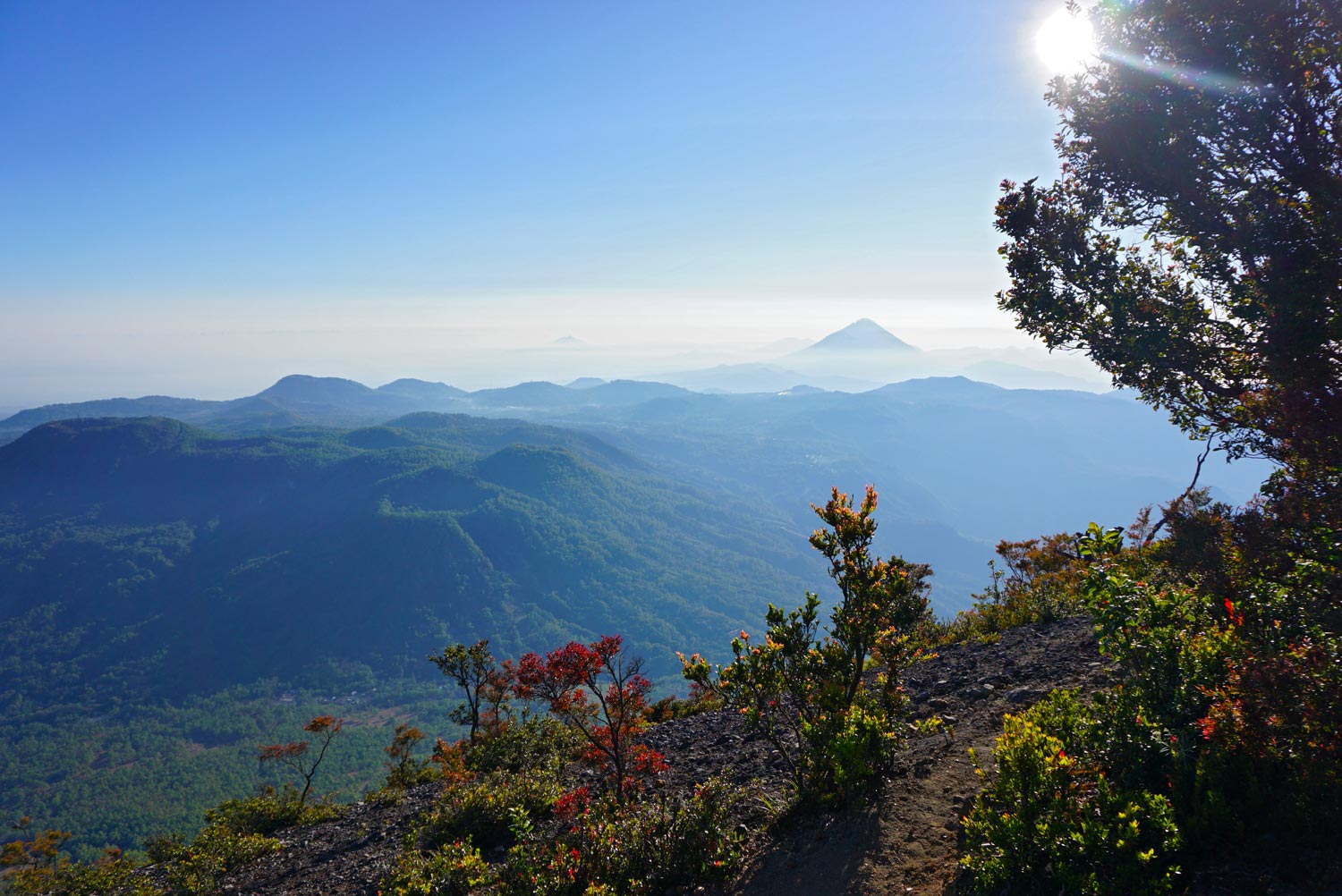 I spent no less than 5 months in Indonesia. Before I traveled to Indonesia for the first time, I came up with a rough itinerary and adjusted it while traveling with this complete Indonesia itinerary as the end result. After my visa expired I traveled to Malaysia, Myanmar and Nepal. Then I decided to go back to Indonesia, not knowing that I would stay there for another 3 months. 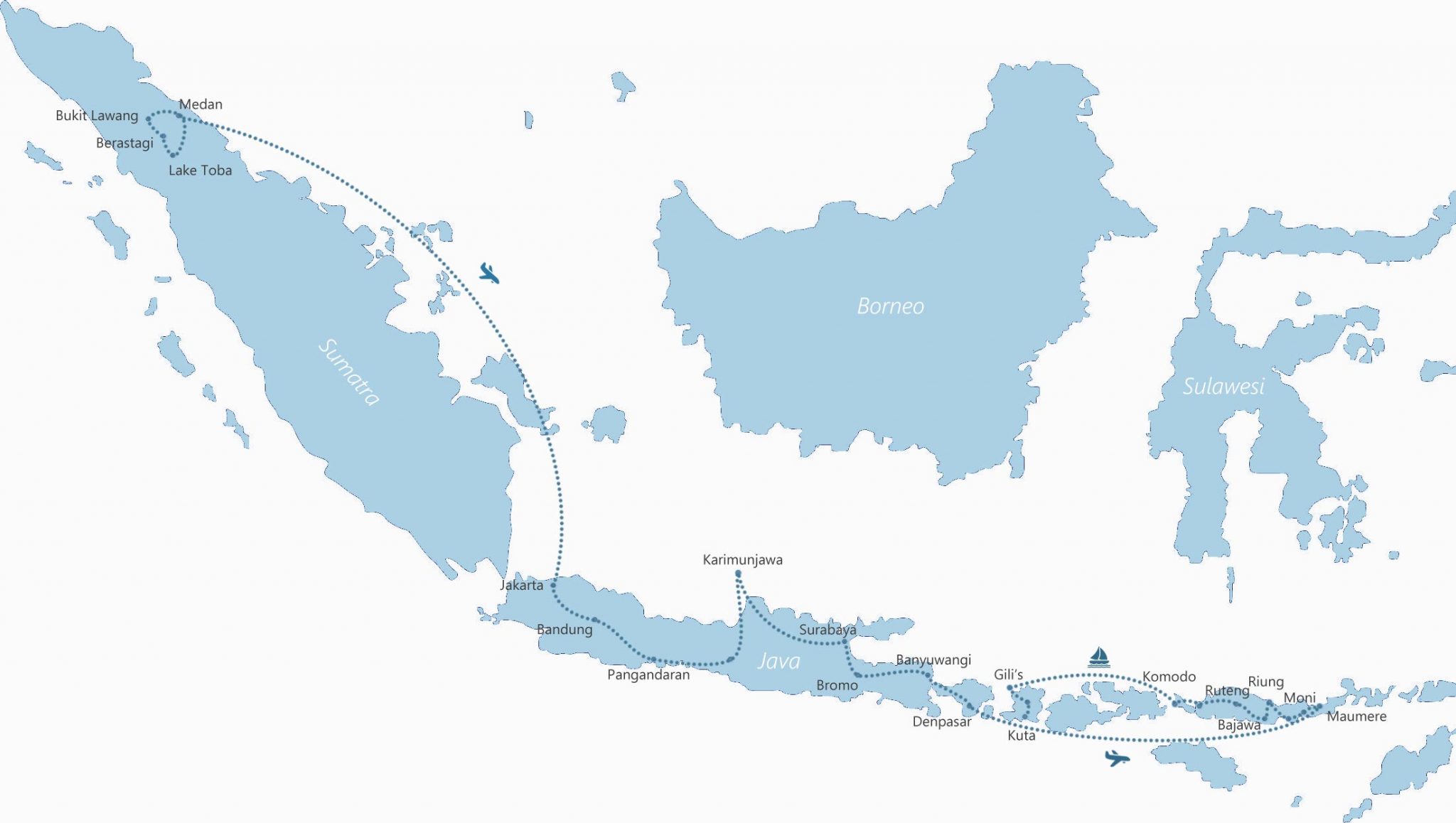 Sumatra is the westernmost island in Indonesia and with its 470,000 km² it’s the sixth largest island in the world. Sumatra, together with Borneo, is the only place on earth where orangutans live.

From the Netherlands, airline tickets to Sumatra are quite expensive. That’s why I started my 8-month backpacking trip in Singapore. I could take a direct, not too expensive, flight and after a few days I could travel cheaply to Sumatra. It’s only a 1.5 hour flight from Singapore to Medan.

Medan isn’t a very pleasant city, so I advise you to travel almost immediately to the jungle, to Bukit lawang. If you would like to spot orangutans, then you have come to the right place in Bukit Lawang! Next you can travel to Berastagi where you can climb two volcanoes. Then you can easily travel to the largest (crater) lake in Southeast Asia, namely Lake Toba. Finally, you can travel back to Medan from where you can fly to Jakarta in Java in less than 2.5 hours.

You can read extensive information and tips about an awesome Sumatra itinerary here. 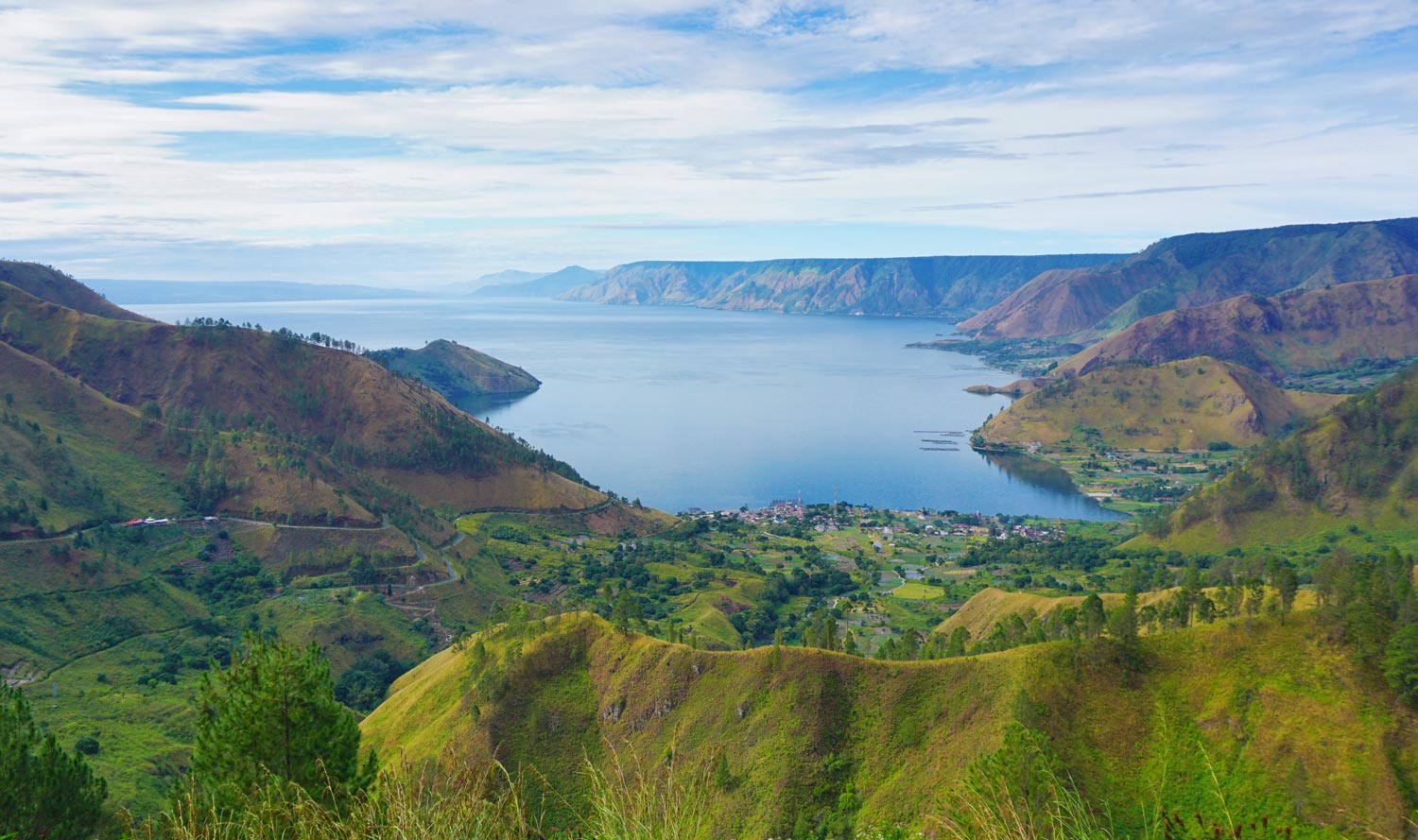 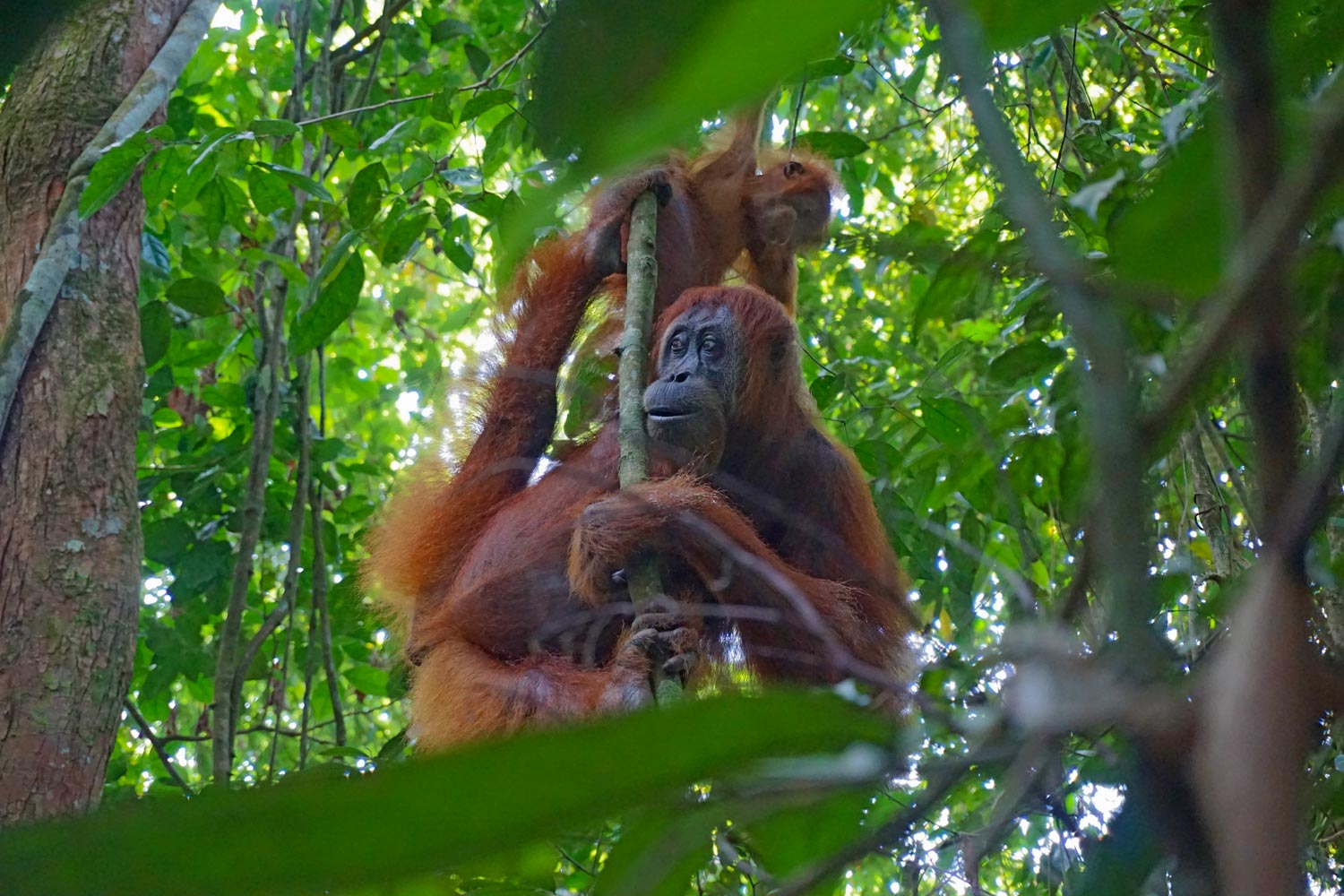 From Sumatra you can easily travel further to Java. This elongated island has an area of 132,000 km² and a population of no less than 145 million!

After you have flown from Medan to Jakarta you can continue to Bandung where you can discover the beautiful surroundings. Surfers can indulge themselves in Pangandaran, but non-surfers can also enjoy themselves here. Then you can travel by train to Yogyakarta, the cultural center of Java. The tropical island of Karimunjawa is also highly recommended. Then you travel towards the impressive Bromo volcano, but first make a stop in Surabaya. Finally, travel to Banyuwangi in eastern Java to visit the Kawah Ijen.

From Banyuwangi you can travel super cheap to Bali by public ferry.

You can read all about a great Java itinerary in 2 weeks here. 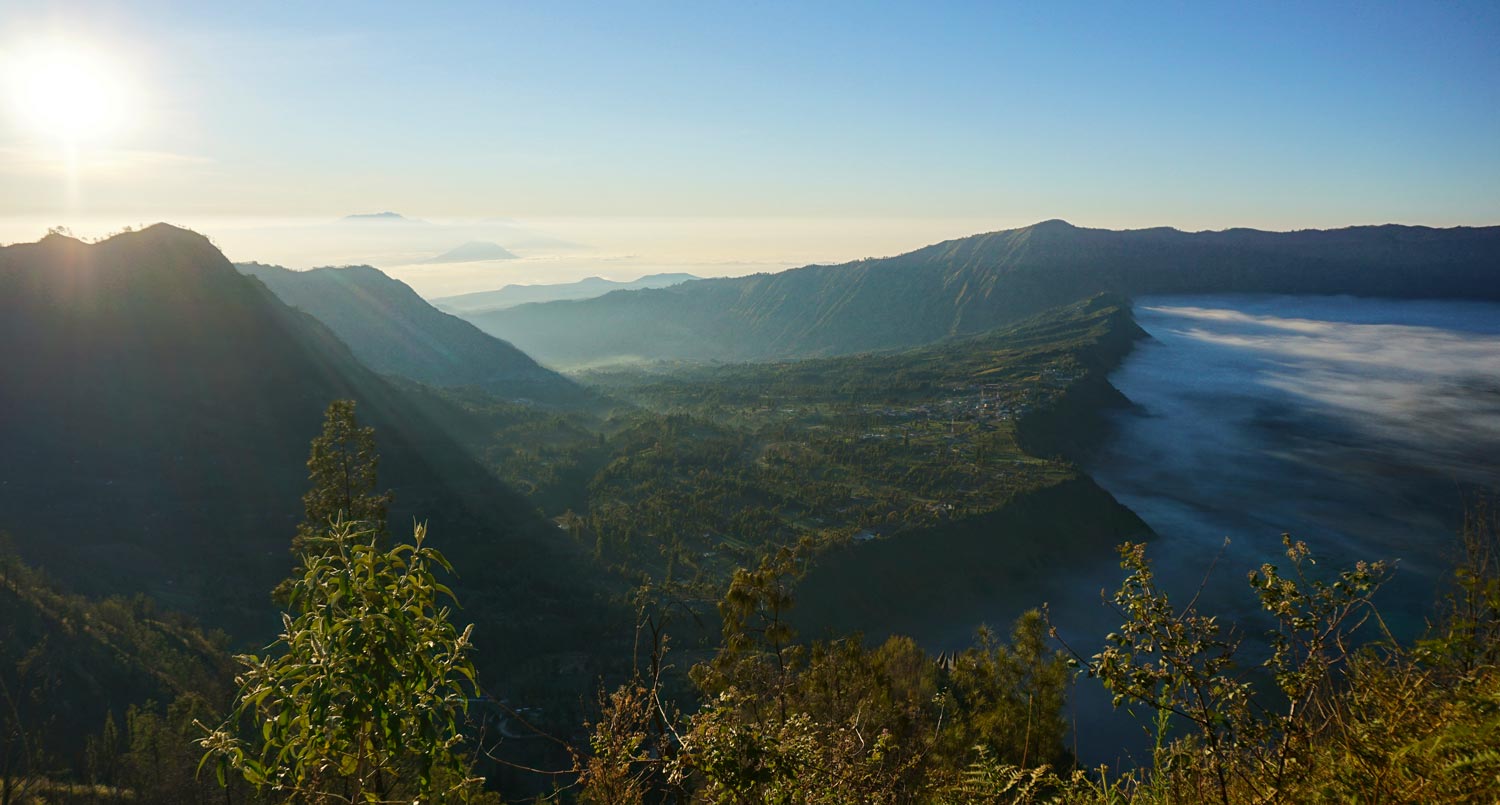 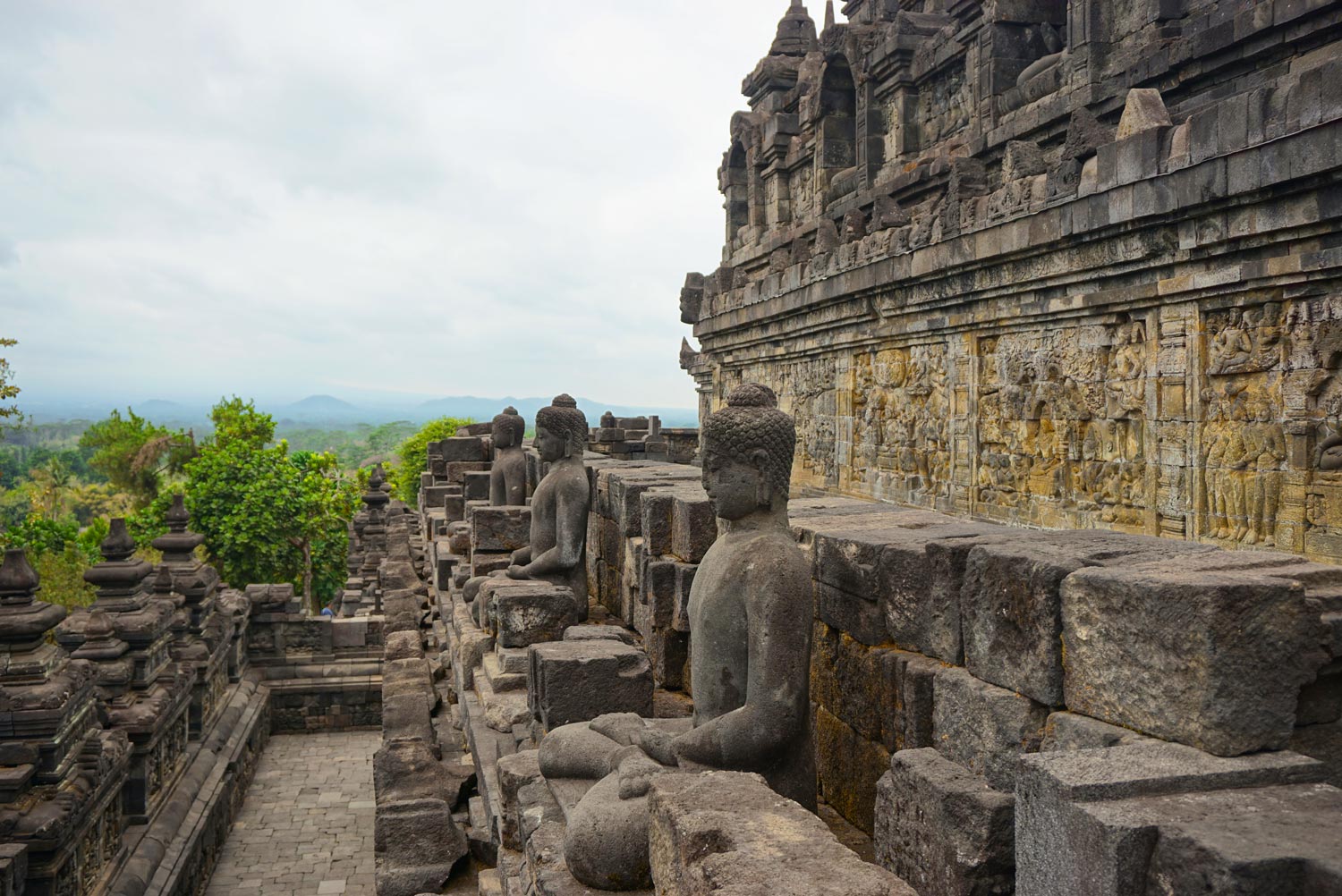 Bali wasn’t one of my favorite islands on the Indonesia itinerary to be honest. Certainly after the rough and non-touristy Sumatra and Java, Bali was frankly a bit disappointing. Initially, I planned not to include Bali in this itinerary and discover the island next time if I were to travel to Indonesia again. The international connection with Bali is quite good and it’s also a suitable holiday destination in our summer holidays. In December I also visited Bali again and I traveled to Nusa Penida and Nusa Lembongan, which I can definitely recommend!

After arriving in Bali by ferry, you can travel by taxi to Ubud or Canggu. Both places are a lot more touristy than you are used to from Sumatra and Java. Ultimately, the intention is to travel to Denpasar so that you can fly to the island of Flores. A lot of time in Bali is therefore not included in this itinerary. 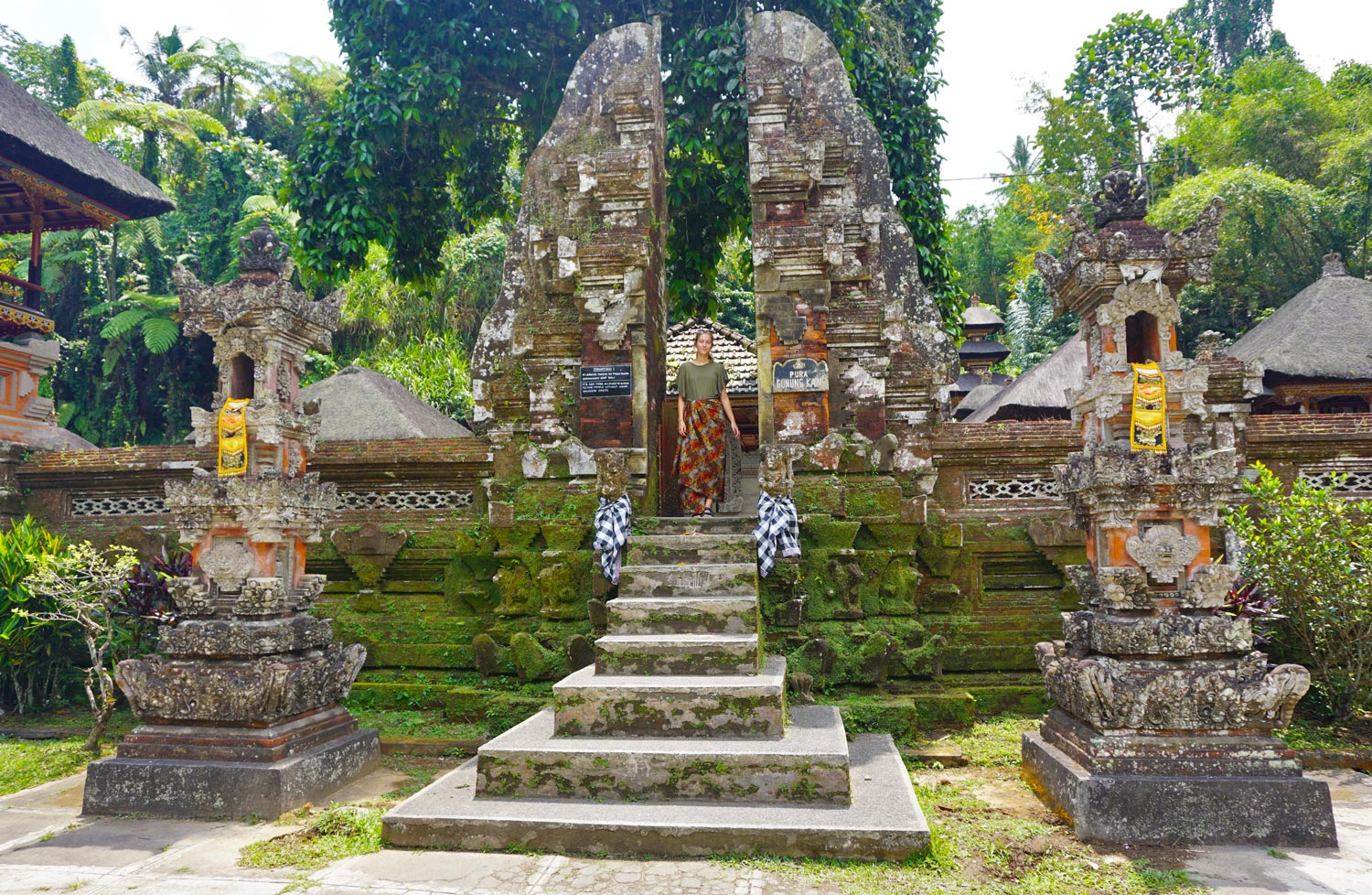 From Bali there are direct (not too expensive) flights to Flores. It is highly recommended to fly to Maumere, discover the whole island and to end in Labuan Bajo. If you prefer to spend more time on one of the other islands in this itinerary, you could also fly directly from Bali to Labuan Bajo. This saves you about 1.5 weeks that you could spend elsewhere.

If you decide to fly to Maumere just like me (which I really recommend!), It is very cool to explore the island with the scooter and hand it in in Labuan Bajo. Not a fan of driving yourself? Then there are enough options for private drivers, but also for buses. After Maumere you can travel to Koka Beach, one of the most beautiful beaches in Flores. Then you can visit Kelimutu volcano from the town of Moni. Next you can travel to the city of Ende and to the 17 islands of Riung in the north. There is plenty to do in the Bajawa area, including climbing the Inierie volcano and relaxing in hot springs. Afterwards you can admire the rice fields of Ruteng and finish in Labuan Bajo.

You can read extensive information about my Flores itinerary for 1 or 2 weeks here. 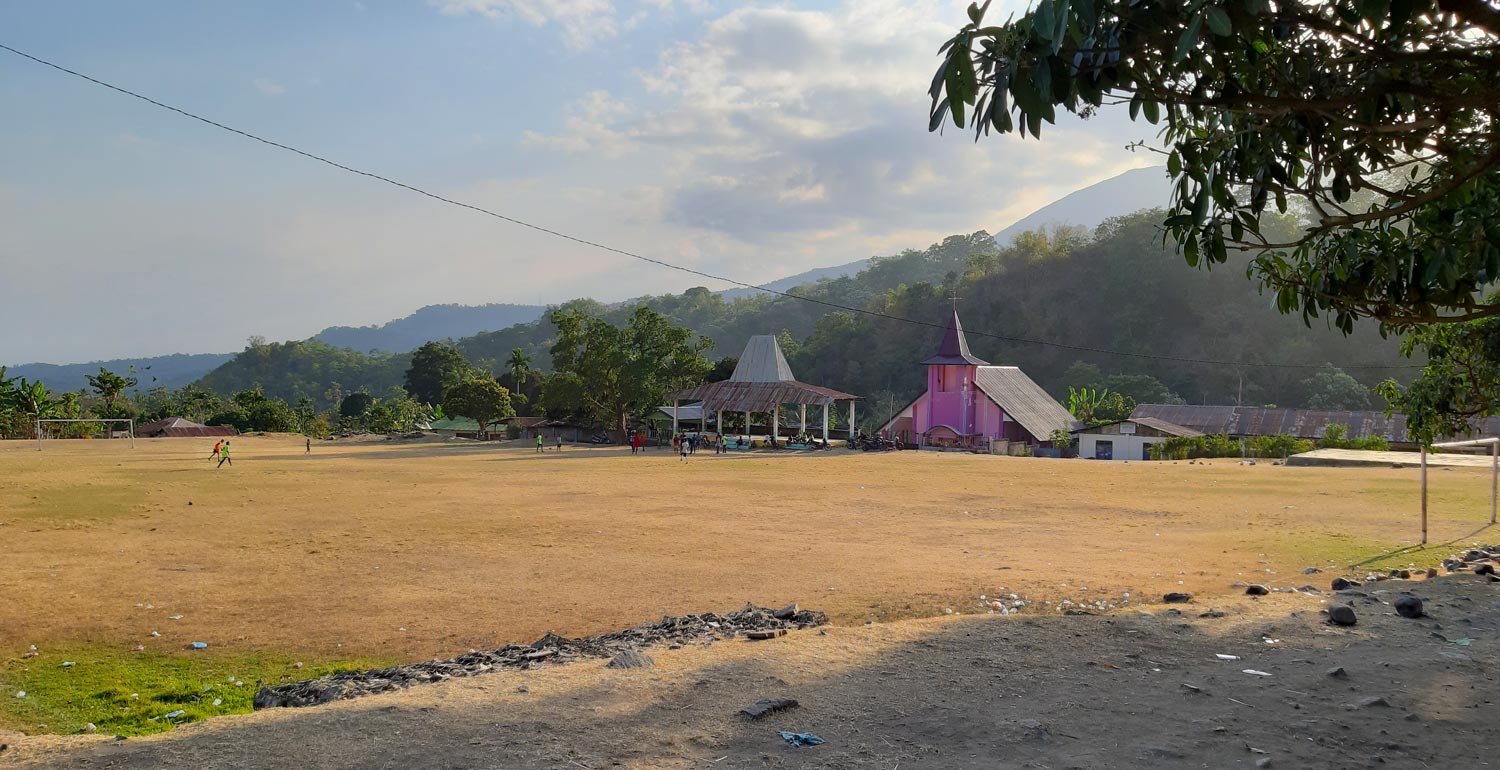 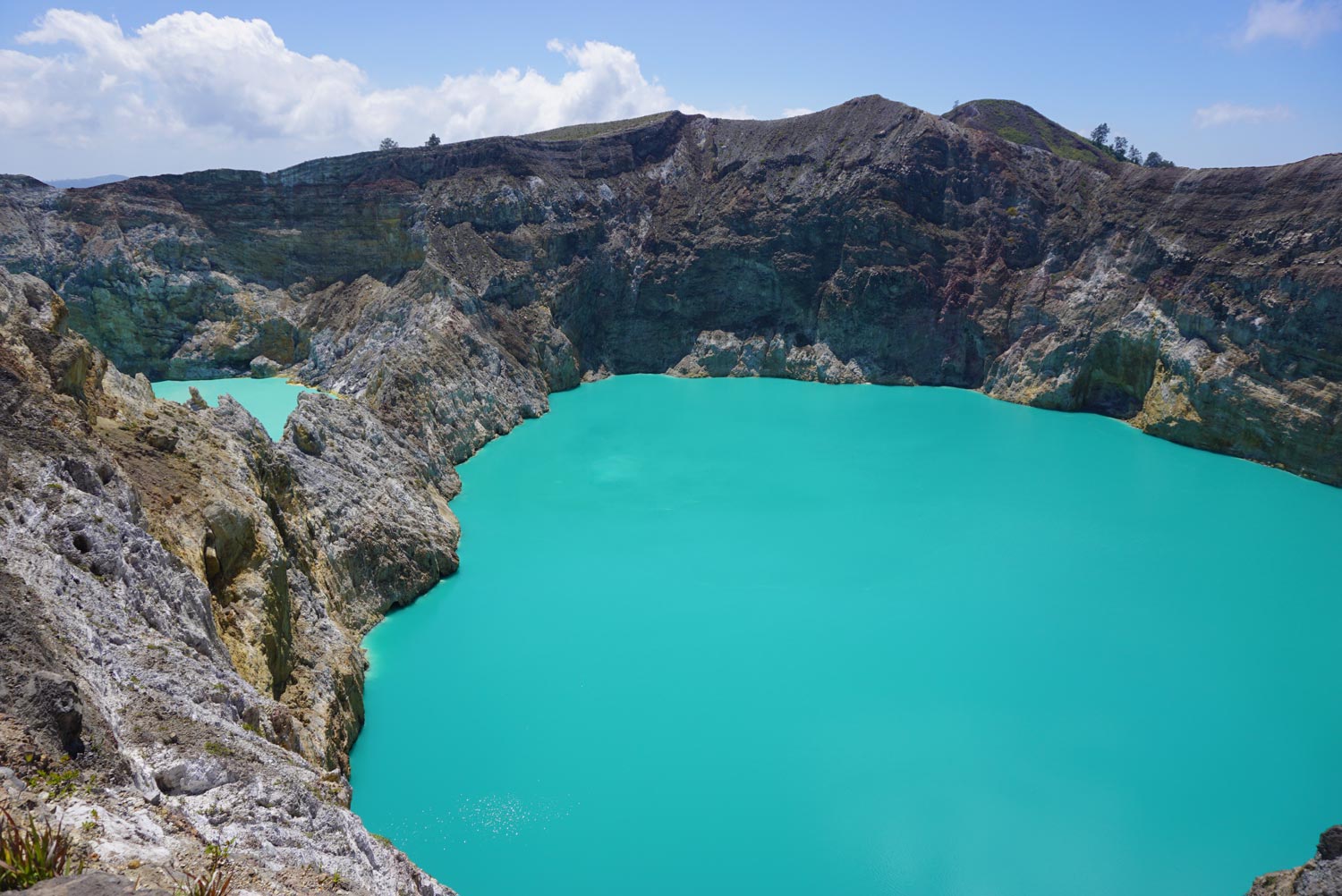 You will probably know the Komodo National Park from the Komodo dragons that live there. But there are many more beautiful things to see, such as hundreds of islands, colored beaches and fantastic sea life. For example, I spotted sea turtles, dolphins and mantas!

What I can really recommend is a multi-day boat trip from Labuan Bajo in Flores. Some organizations, such as Wanua Adventure, end their trip in Lombok, which is ideal.

Read everything about a boat trip in Komodo National Park.

Number of days in Komodo: ± 4 days 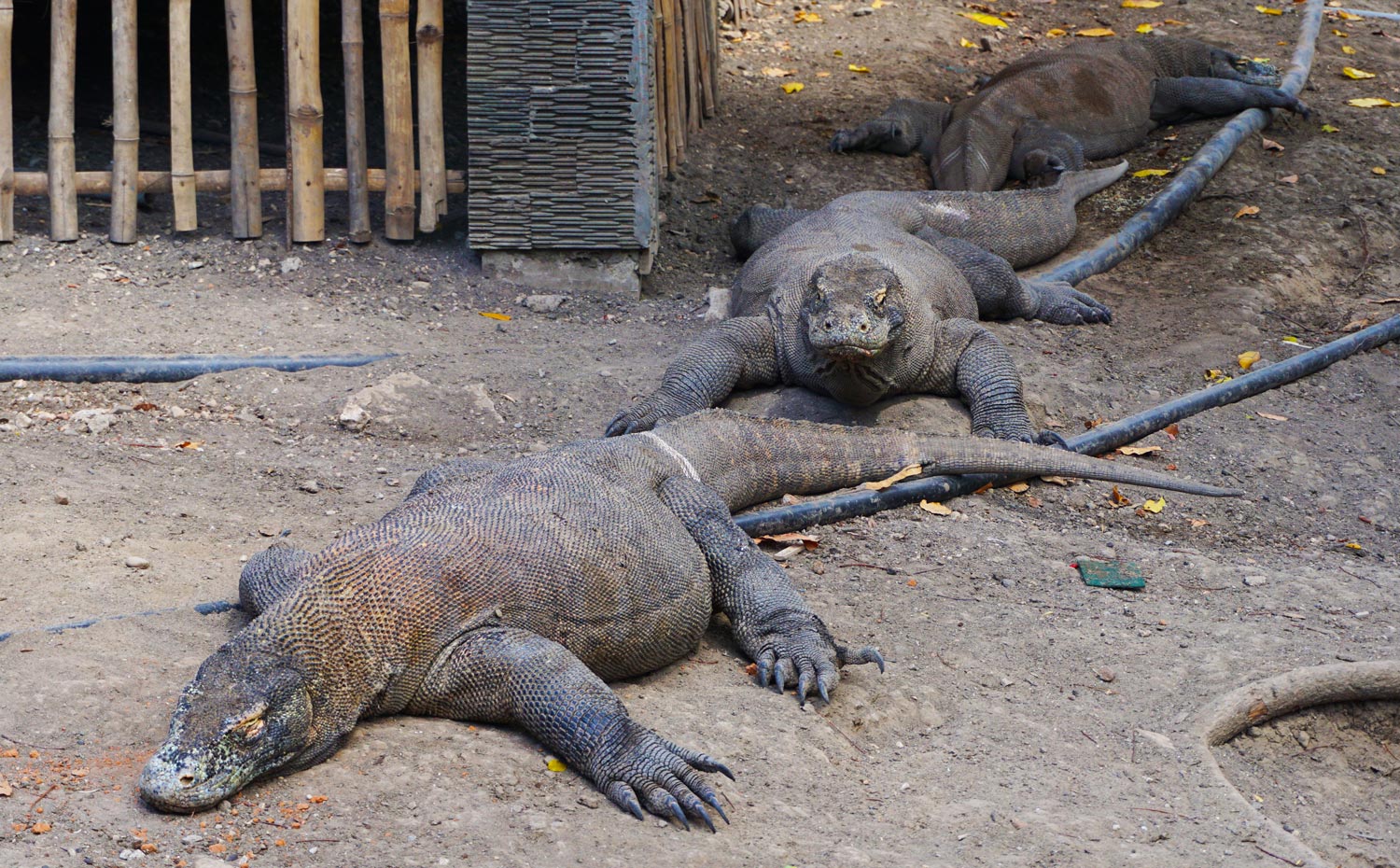 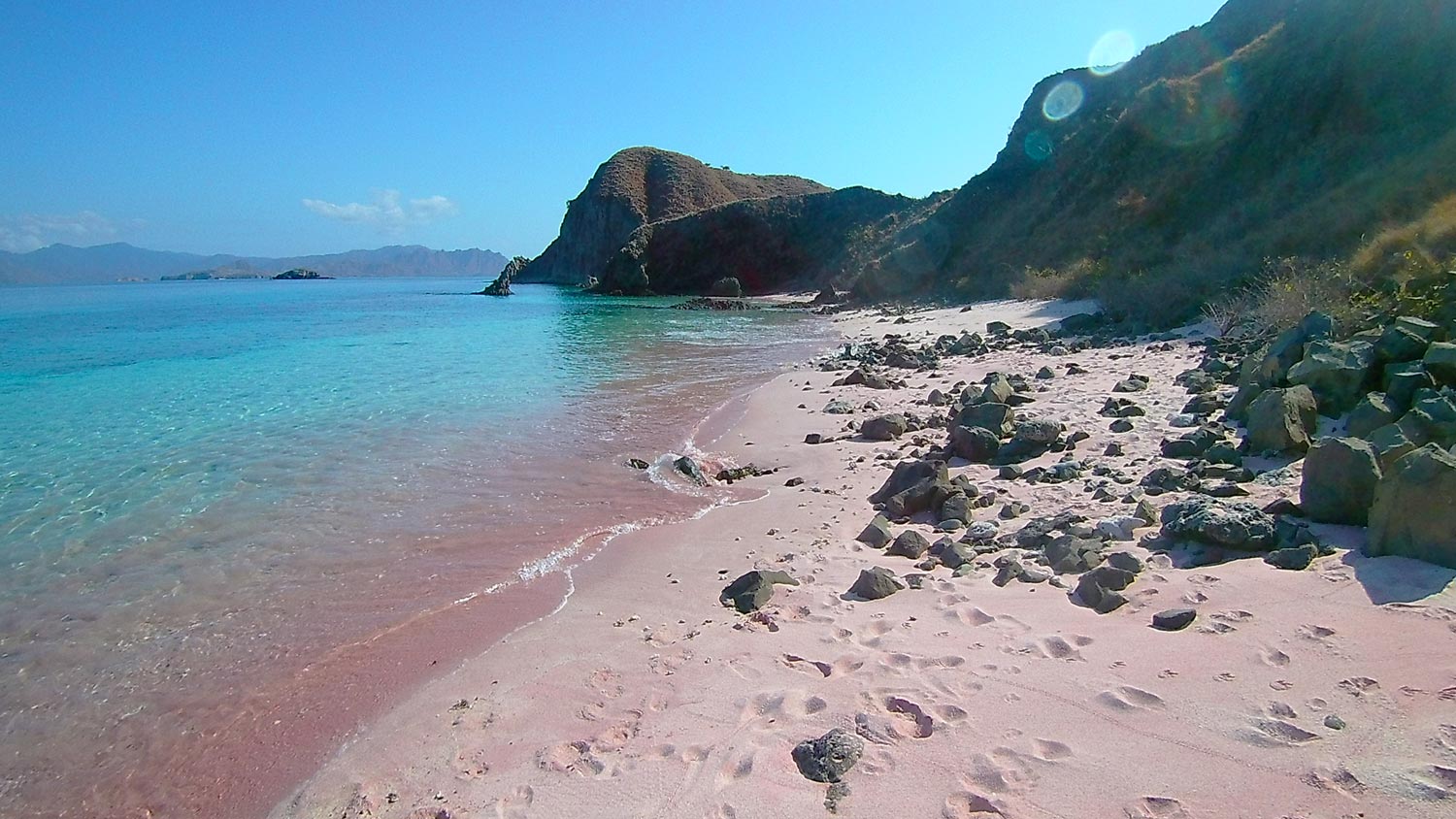 If you travel with Wanua Adventures, you can choose to be dropped off at different places in Lombok. I chose the Gili Islands which turned out to be a very good choice. Here you can go for relaxed beaches, nice parties and good restaurants. After the Gili’s you travel to Tetebatu, an attractive village between the rice fields south of the Rinjani volcano. You don’t have to get bored here, because there’s plenty to do! After Tetebatu you travel to the surf Valhalla of Kuta in the south of Lombok. From Kuta it isn’t too far to Praya airport from where you can book several international flights.

Read more about the complete Lombok itinerary in 1 or 2 weeks here. 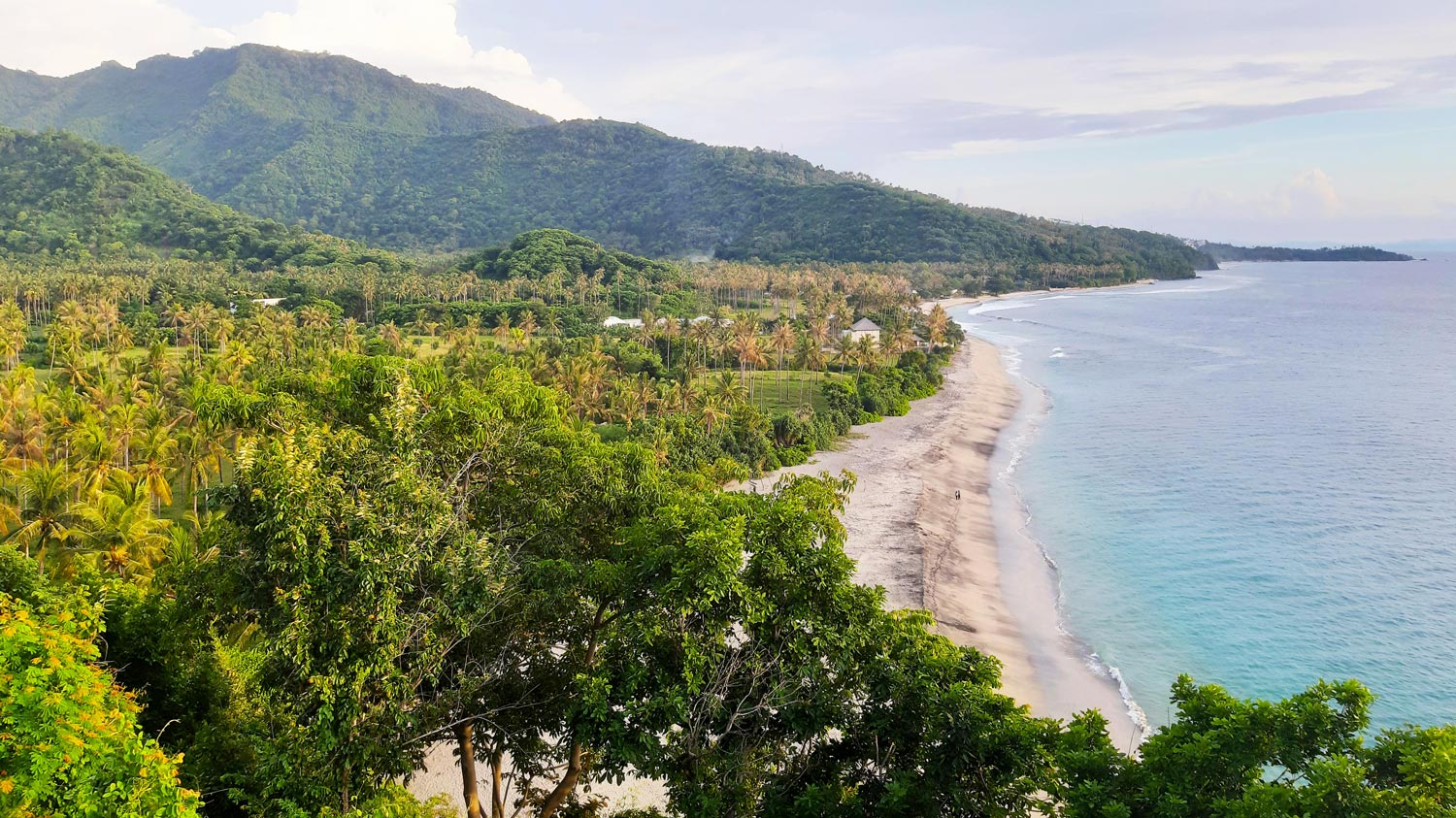 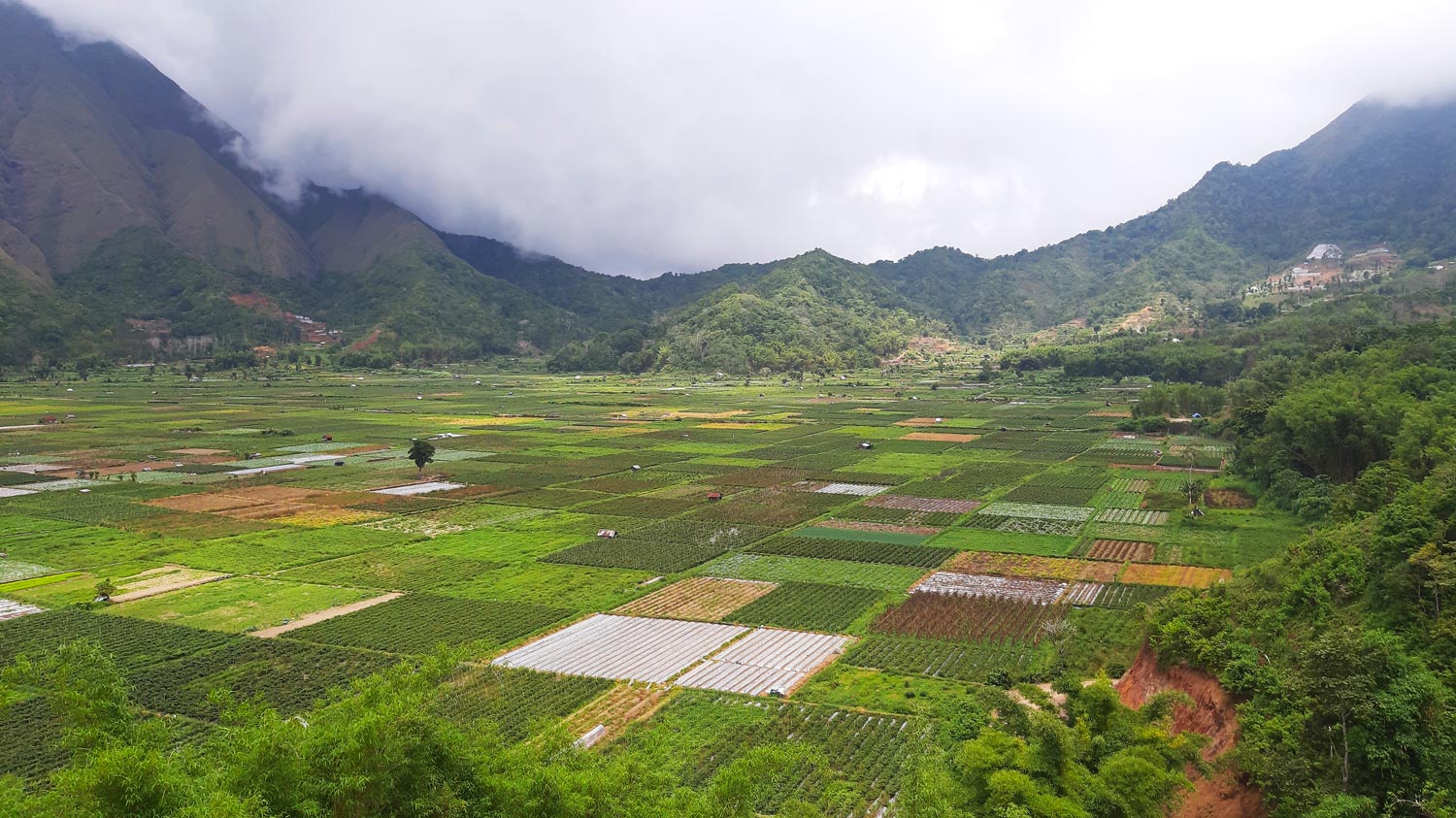 2 months of traveling through Indonesia, is that possible with the visa? Hell yes! I’ll explain the options (I took the Dutch/European regulations as a measure, rules can differ for other countries).

It’s possible to travel out of the country in between. Not the most practical option, but it’s possible! When you arrive in Indonesia you get a free stamp for a stay of 30 days as standard (these are the visa free countries). This stay cannot be extended and you have to leave the country after 30 days. For example, you can book a return ticket to Kuala Lumpur or Singapore if you would like to return. You can just enter Indonesia again on the same day. It’s the exit stamp that’s important for the immigration. You can do this as often as you want, but you may get some questions about your constantly returning stay after a few months.

Instead of a free stamp, you can also opt for a Visa On Arrival (VOA). On arrival at the airport (before you pass customs) you can purchase a VOA of 500,000 IDR ($ 35). This 30-day visa can be extended at the Immigration Service (Kantor Imigrasi). I think you can apply for such an extension after 1 or 2 weeks and it will take a few working days before you can pick up your passport again. To extend it’s necessary to already have a travel ticket.

It’s also possible to apply for a 2-month tourist visa at the Indonesian embassy. This is actually the easiest option because you can travel around Indonesia without any worries. That’s why I chose this option when I first traveled to Indonesia and traveled this 2 month itinerary. This visa costed me € 50 and is valid for 90 days. This means that you must enter Indonesia within 90 days. You can read more information about visa and immigration policies. A requirement is that you already have a onward ticket, which mean an airline ticket that shows that you are leaving the country in time.

Tip: you can easily make onward travel tickets yourself. Officially this isn’t entirely honest, but sometimes you don’t know what your next destination will be. 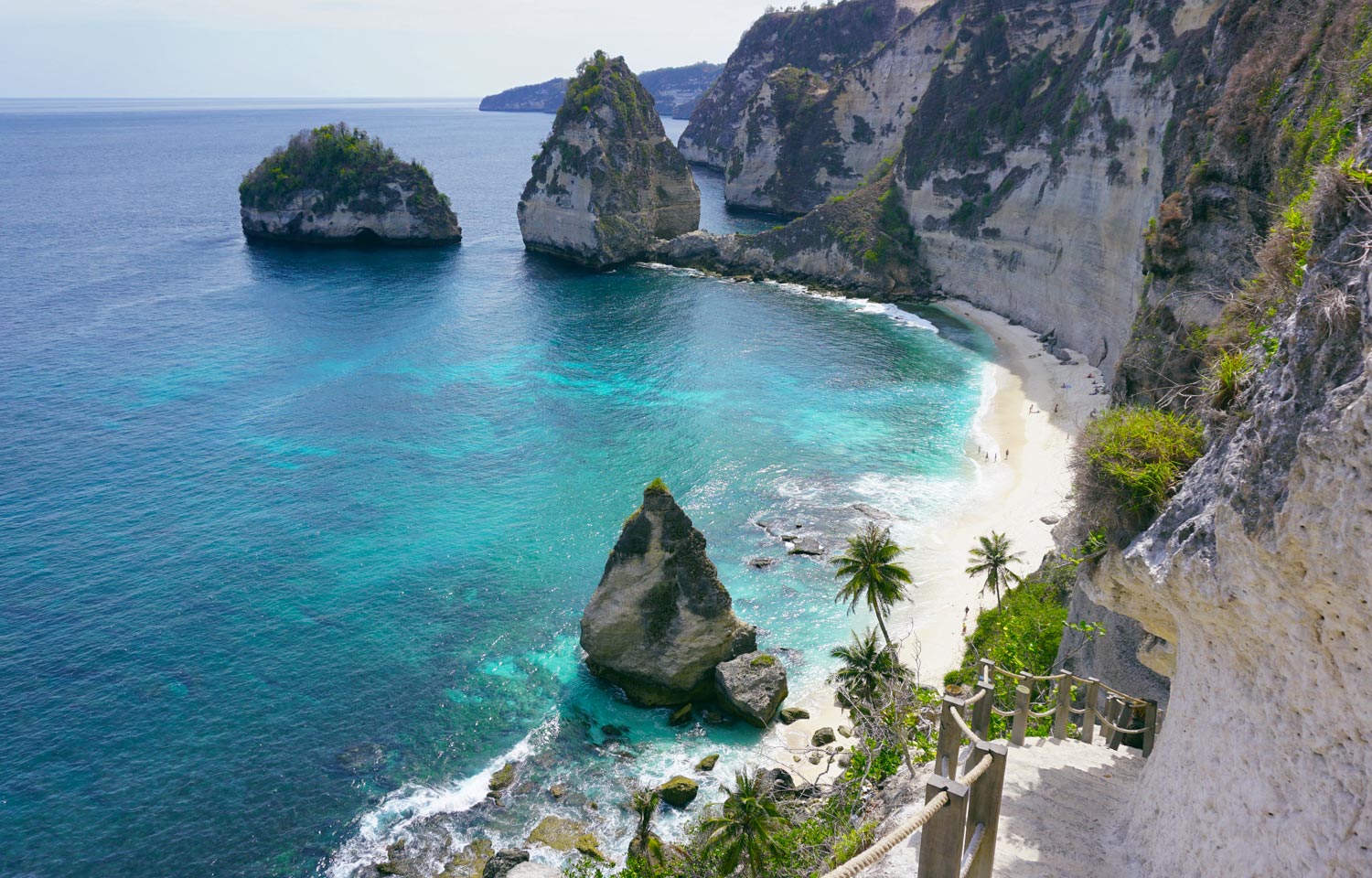 In Indonesia, about 16% of the population lives below the poverty line. This doesn’t even differ a lot from many Western countries, but the big difference is of course that the income is low, but many goods are also cheap.

Alcoholic drinks, especially on the predominantly Islamic islands, are pricey compared to other goods. For example, in some parts of Java it isn’t even possible to buy alcohol. A large Bintang beer costs around 35,000 IDR (€ 2.10) in the supermarket. In the tourist areas, such as Bali and the Gili Islands, alcohol is generally a bit cheaper.

If you really want to drink local-style, try the traditional spirits such as rice wine and palm wine. These are brewed by the locals themselves and can only be bought at their home. As a tourist it is difficult to get this, so you need locals. Traditionally, everyone sits on the floor and one glass circulates that everyone finished, replenishes and pass on.

Indonesia has a rainy season and a dry season. The rainy season runs roughly from October to April, but because Indonesia covers such a large area, this doesn’t apply to the entire country. Overall, the best travel time for this Indonesia itinerary is May – September.

In the rainy season you can generally also travel through Indonesia. There’s simply a greater chance of clouds and rain. Fortunately, the rainshowers are often short and intense, but it also happens that it rains for several days in a row. Nothing is more unpredictable than nature.

Culture and religion in Indonesia

Indonesia is the largest Muslim country in the world, but also Hinduism (mainly in Bali), Christianity and Buddhism are adhered to.

It’s good to know that most islands can differ considerably from each other in terms of culture, religion, but also language. Basically, Bahasa Indonesian is spoken everywhere in Indonesia. However, in addition to Bahasa, each island also has its own language and sometimes several languages. 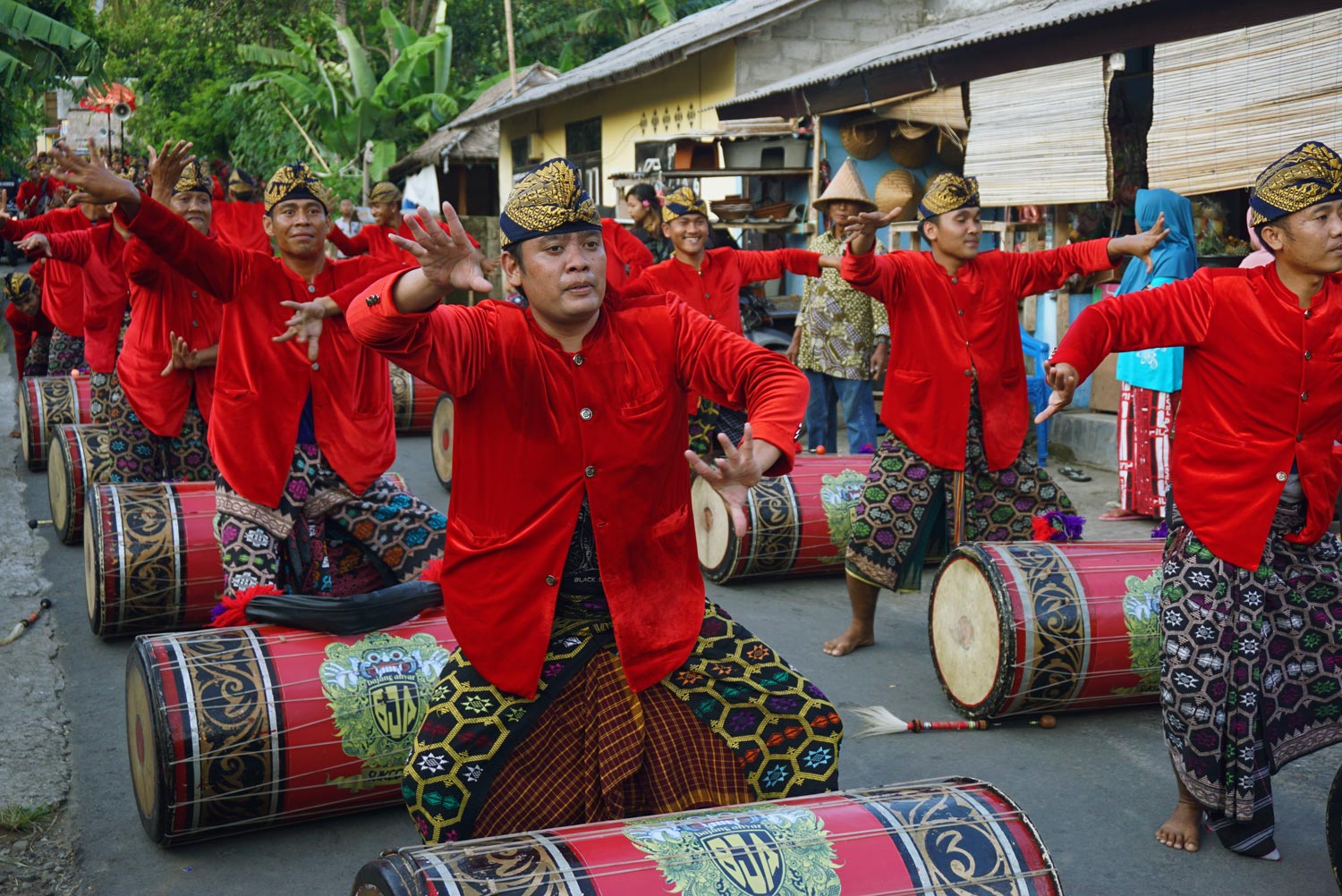 After traveling for 5 months in Indonesia I got to know the culture in a special way, especially in Lombok. Here I mainly traveled with locals and also lived with them for a while.

From my perception the Indonesians are very open and friendly people. I’ve often seen random people come to chat with me when they actually didn’t speak English. Most people were very interested in me and very hospitable. There is less prosperity than in the rich west, but people sometimes seem a lot more positive and happier. That inspired me so much!

Most locals really live in the moment and don’t worry about the future. Because thinking about the past causes regret and thinking about the future causes fear. That’s a big reason why many locals hardly make plans. Plans that have been made often fail. You don’t have to be surprised when someone shows up at least half an hour later or maybe not at all! We called it the “Indonesian promises”.

In addition, connections in Indonesia are of great importance for finding work, etc. The locals like to keep everyone as friends and many are very forgiving. Hate is not common.

What I really liked was eating together with the locals. Everyone eats together on the floor or on the gazebo (wooden house on stilts). And of course you also eat with your hands! 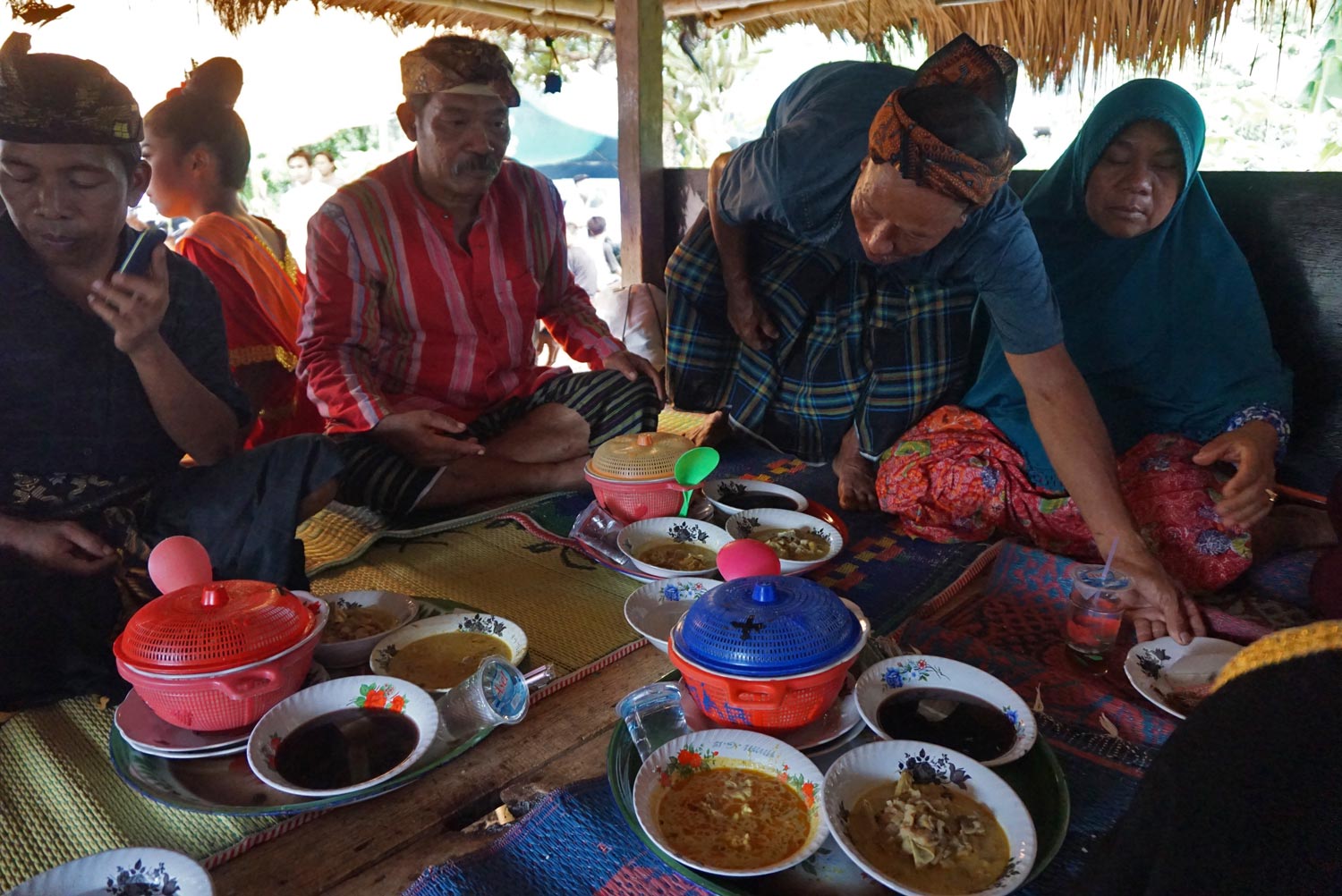 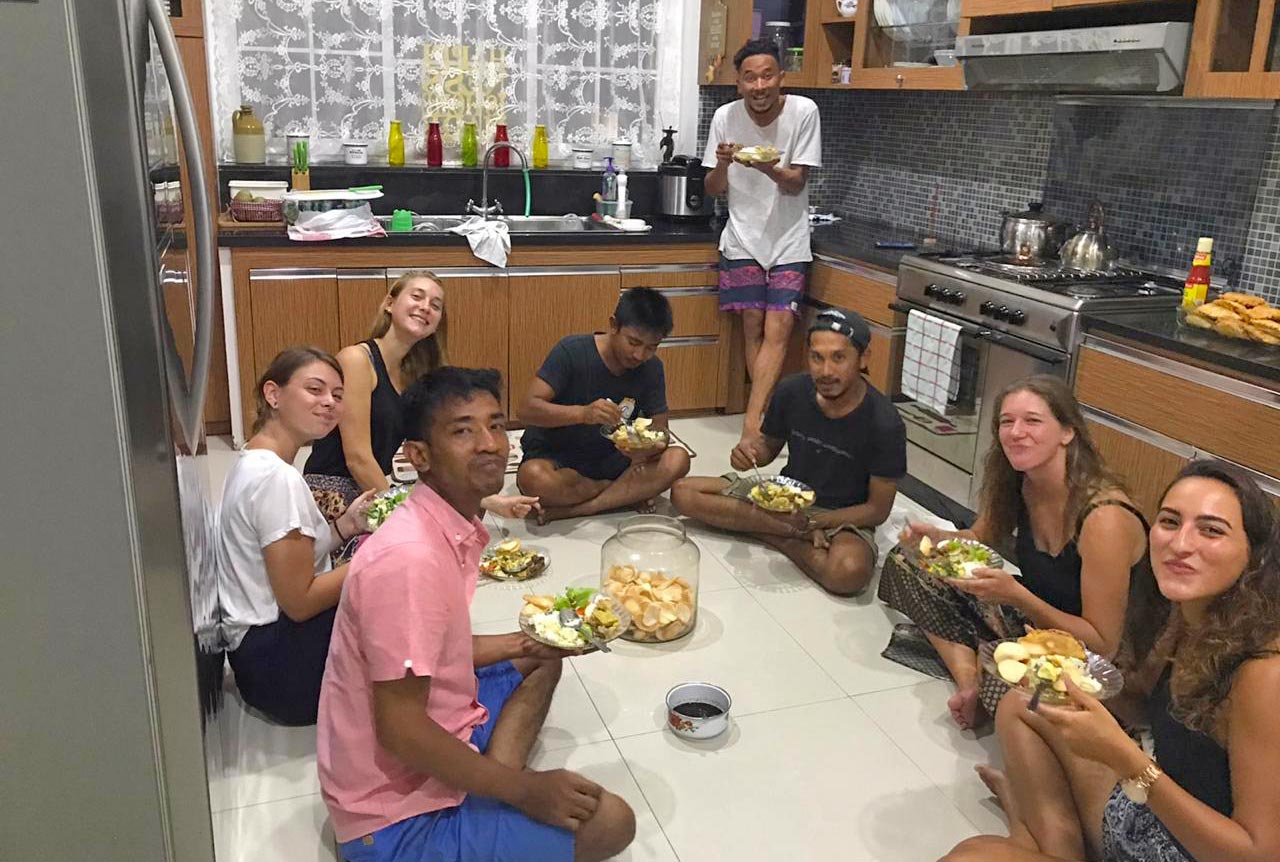 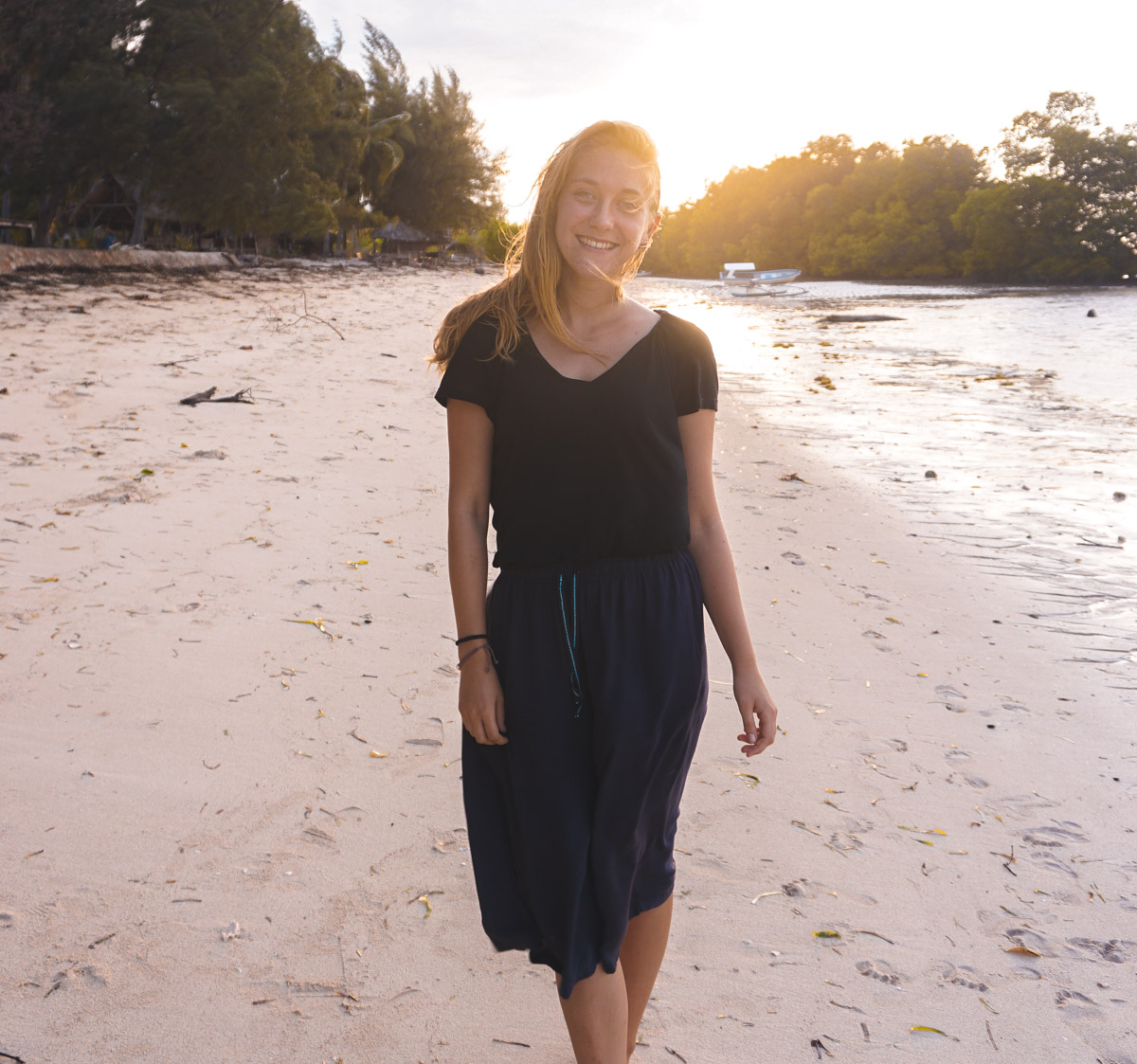