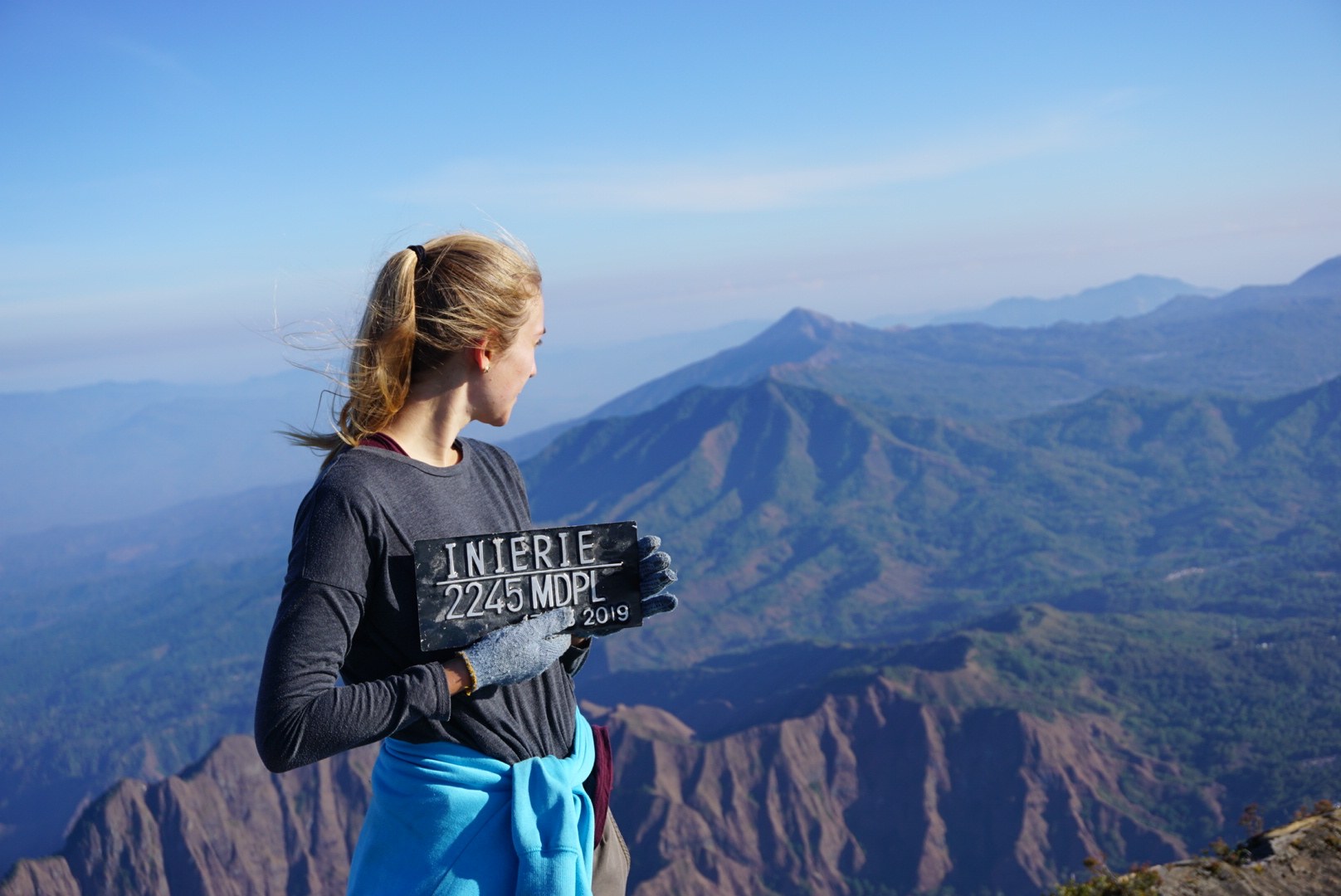 Did you know that there are no fewer than 15 volcanoes on the Indonesian island of Flores? That’s quite a lot. Of all these volcanoes I climbed two; the Kelimutu in Moni and the Inierie in Bajawa. At over 2,245 meters, the Inierie volcano is the second highest on the island. It was also quite a challenge to climb this giant in half a day! The shape of the Inierie is as you see it in movies. Its perfect shape stands out from everywhere in the environment. I climbed this stratovolcano during my Flores itinerary and thought it was a fantastic experience!

To get a bit of a picture of a trip through Flores and climbing the Inierie volcano, you can already take a look at my travel video of Flores.

On the day of the hike I found myself in Bajawa. It’s a small village between the mountains, but I didn’t find the village itself very special. The surroundings, on the other hand, are very beautiful and you can enjoy beautiful viewpoints in many places. In addition, I visited a waterfall, a traditional village and recovered from my trek in the Malanage Hotsprings.

Since it can get very hot during the day on the volcano, it’s recommended to start the trek at 3:00 AM. In the sun you also burn very quickly at such a height. However, I gave a little more value to an extra hour of sleep and started at 4:00. Sleep is still sacred.

So at 2:45 the alarm went off. Waking up for a while, getting dressed and there I went. I got on my motorbike and drove to the starting point in less than an hour. It was so damn cold while driving! My accommodation was quite out of the center, so it took me a long time. From Bajawa center it will take you about half an hour.

My guide was already waiting at the starting point. I parked the motorbike and we started with our headlamps on the trekking.

The first part was still easy. We walked up a path of sand, ash and stones. However, the path got steeper and more challenging by the hour. At one point we climbed up on the loose stones which was incredibly tough. When you took two steps forward, you slipped one back. The last piece of loose stones lasted about an hour.

From 5:20 we could enjoy the sunrise while climbing. Wow, we were already at such a high altitude! The brighter it became, the better the view. The fog slowly disappeared because of the warm rays of the sun and the mountainous green surroundings became more visible.

During the entire climb we had a view of the fantastic surroundings with the over 2100 meter high Ebulobo volcano that protruded above the mountains.

After 2.5 hours of climbing we finally reached the rim of the crater. It is not a huge crater like that of the Bromo volcano, but it is certainly impressive. We took a short break with cola and cookies to replenish the energy level. After this we continued our way to the highest point of the volcano where the most amazing view was waiting for us.

After half an hour we actually reached the top. Wow what a view! I have never had a 360 ° view at such an altitude. A few minutes before we reached the top I felt exhausted and sweaty, but because of the view and the feeling of victory I had no problems at all anymore. I was so proud of myself that I did this. We had a view of the fantastic mountainous surroundings and the Savoe Sea.

Going down is easier

I wasn’t looking forward to the way back, because the route was very steep and my knees were already quite sore. Fortunately we took another route where we walked a lot on the loose stones and ashes. You might think that doesn’t sound very safe, but because everything was so loose, we could go down “skiing”. I often fell (not painful), but it was a lot of fun! I provided a huge cloud of ash, so keeping my distance was necessary.

Our shoes were filled to the brim with ashes and stones after the descent, but it was well worth it. The way back was faster than the way there, but we still took about 2.5 hours because of extra short breaks.

Independent or with a guide?

I personally recommend a guide to climb the Inierie volcano. I might not have been able to find the starting point in the dark, I guess. Once you’ve found the route, a guide isn’t very necessary, but it is useful though. The path is largely self-explanatory, but there are still some unclear parts. When you go down again, it is very useful to have a guide who shows you the route.

On the way I met two other tourists who both climbed the volcano independently. We met one of them on the way back who took the wrong route up. It certainly appears possible to climb the volcano on your own, but it may be more convenient with a guide.

There are no entrance fees for the Inierie volcano. But a guide is recommended. What I understand is that a price between 400,000 and 600,000 IDR (€ 23 – € 35) is average for an English speaking guide. When you do the hike with several people, you can share these costs.