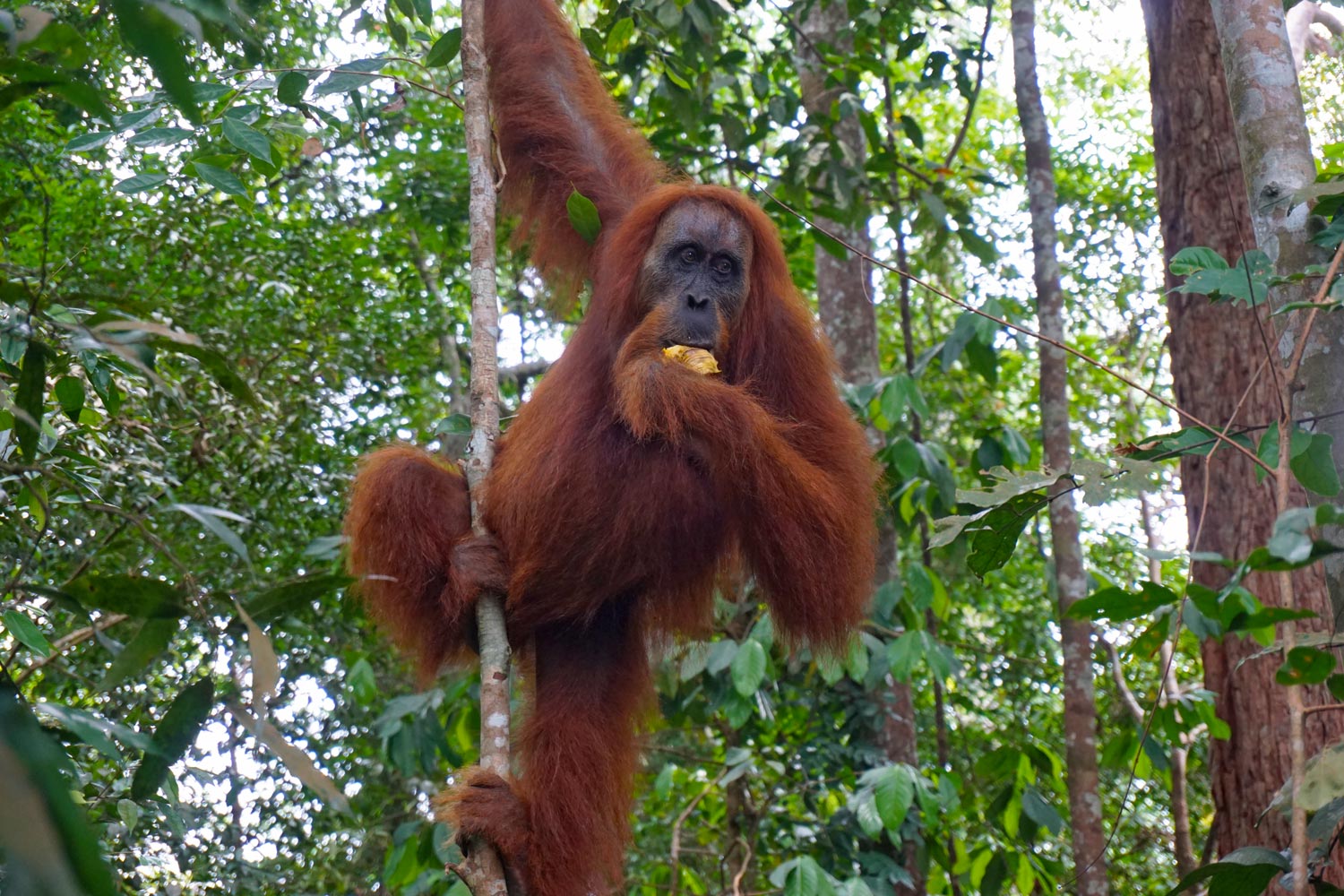 Is spotting orangutans in the wild also listed on your bucket list? In that case, you should ready visit Bukit Lawang in Sumatra! Sumatra and Borneo are the only places where orangutans are found. During my Sumatra itinerary, Bukit Lawang was my first destination in Indonesia.

My 2-month Indonesia itinerary started in Sumatra. I flew from Singapore to Medan in North Sumatra. From the airport in Medan I immediately took a taxi to Bukit Lawang, to the jungle.

Bukit Lawang is a cute village next to the river. It is known for the largest animal reserve of the Sumatran orangutan. There are about 5,000 of these beautiful animals in the area. In addition, Bukit Lawang is one of the best gateways to the Gunung Leuser National Park.

What I quickly realized when I arrived in Bukit Lawang is that there’s a considerable rivalry between guesthouses and tour organizations in the village. Most guesthouses offer their own tour to the national park and they all actually expect you to book this with them. However, I had booked my guesthouse and tour separately in advance. And clearly that wasn’t appreciated. On arrival at my guesthouse I even received half a speech from one of the employees that this isn’t how it’s supposed to be and that I did something wrong. I’m telling you, that was quite a letdown. The choice must of course be free for everyone.

The reason is, that many local guides take too little account of animal welfare and feed the monkeys for the tourists. That’s of course very wrong, because it makes the animals aggressive and too accustomed to people. It’s therefore important to choose a good tour organization. However, I was very satisfied with my tour organization choice: Bukit Lawang Jungle Trekking. These guides didn’t feed the orangutans. Fortunately, there are other organizations that also take animal welfare into account. Also check out the overview of organizations on Tripadvisor before you make a choice.

What to do in Bukit Lawang?

Bukit Lawang is located on the edge of the Gunung Leuser National Park, so you’re practically already in the jungle. I really enjoyed walking around the village. For example, I walked to the Bat Cave. Here I (of course) saw bats, but also huge-ass spiders and insects. I also spotted a bright green lizard along the way. I think the bat cave it was no more than half an hour walk from the village. The route is not clearly marked on Maps, but it is on the offline maps of Maps.me. Costs for the Bat Cave are IDR 25,000 per person for a guide and flashlights.

The route to the Bat Cave passes through the village and finally through the jungle. You can’t really get lost there. On the way back I saw a large group of macaques on the path. Experience has taught me that these monkeys are generally quite aggressive, especially when you look at them. A passing local advised me to wait until the alpha male left.

When the horde of monkeys seemed to leave, I could continue my way. Only the monkeys decided that they were interested in me. It wasn’t very pleasant when they showed their teeth. I walked on quietly, trying not to look at them as they followed me. Eventually one grabbed my ankle and I was really terrified. Fortunately they didn’t do anything else and I arrived safely back to the village. What an adventure on the first day ..

But why you really come to Bukit Lawang is of course for an awesome jungle trekking. I did a two day jungle trekking where I slept one night in the national park. An experience to never forget!

The first day started on time, around 8 o’clock I think. The group consisted of 6 people. We covered quite a distance on the first day. And in the jungle with that oppressive heat, every step counts double.

When we started our hike, we hadn’t even passed the entrance to the national park and we had already seen the first monkeys: Thomas Leaf Monkey. This species only occurs in Sumatra in Indonesia. A whole group of these Thomas Leaf Monkeys slung in the trees above our heads and a few walked on the ground. They are generally not shy at all and we could get quite close. These monkeys, on the contrary to macaques, are not aggressive at all, which is why they are generally loved by the people.

After half an hour we officially found ourselves in Gunung Leuser National Park. Not long after that we saw our first orangutan! How cool! It was a mother with a cub. The youngster was very interested in the tourists and climbed onto one of the tourists without being asked. The guides intervened quickly, because the mother was very protective and in such a case could certainly attack. One of the guides therefore returned to the mother with the young. Every time the cub walked our way, everyone quickly took off.

We continued our way and saw some giant red ants walking on the ground. Our guide told us that only the bite of the female or male (which of the two I forgot) is extremely painful. Just good for both, so be careful! We also saw a giant poisonous centipede walking between the leaves. Now you may understand why wearing closed-toe shoes, long socks and long pants are a must.

After hiking for a while we saw another orangutan with a young one. This one was a bit smaller and still hung on his mother. He also tried to scramble around in the trees himself.

The guides knew from each orangutan what their name was and whether they were aggressive. There are also some very aggressive orangutans walking around. And you guessed it, these have unfortunately become aggressive thanks to the influence of humans: feeding. We therefore always walked between the guides and even had to run away from one of these aggressive monkeys on our first day. One of our guides has lost part of his finger because of the bite of one of the orangutans. Fortunately, these aggressors can only be counted on one hand.

After our delicious fruit lunch, we all agreed that our first day was amazing. We had already seen about 10 orangutans including a number of babies and also very close! I found it so special to see how calm and interested these animals can be.

Mid-afternoon we arrived at the camp. The camp was set up next to the river. Since we had all been sweating a lot while hiking, it was lovely to take a refreshing bath in the river. When we were resting with a cup of tea a little later, we saw another orangutan hanging in the trees across the river. Such a moment is also very cool.

Dinner (with atmospheric candlelight) was incredibly tasty. We ate curry, tempeh, rendang, prawn crackers, chicken, potato cakes and more. Did you know that the best rendang is made in Sumatra? The recipe for Rendang is also on my website. We spent the rest of the evening in the tent telling riddles and stories.

The next morning, after breakfast, we left early. We first walked a bit through the river after which we continued our route through the jungle. We were soaked with sweat again after half an hour. Also on this day we spot a number of orangutans. These even came very close again. They were not at all shy of people and very interested in us. They casually hung around looking down on us.

After walking for several hours we arrived at the big river. After a nice lunch, we returned to Bukit Lawang by tube. The rainy season had not yet started, so fortunately the water was not very wild. I imagine this activity is too dangerous in the rainy season.

In these two days we have seen no less than 14 orangutans, including 5 babies.

Price for a jungle trekking in Bukit Lawang

From Bukit Lawang it’s possible to make different types of jungle treks, from half a day to as many as five days.

In general, it rains a lot in Sumatra all year round. On the other hand, you have the least chance of rain in June – August, which makes these months the best travel time for Sumatra.

I visited Bukit Lawang in early August and luckily had very good weather during the trek. In the rainy season, you are less likely to see orangutans, as they then retreat and show up less quickly. Our guide told that orangutans generally have a very sensitive face. Therefore, they often use a leaf from the tree to protect their face from the rain.

Bukit Lawang is a popular destination in Sumatra and therefore there are plenty of accommodations in and outside the village. Prices are generally very low. You can spend the night in the village for a few euros.

From Bukit Lawang there are several options for traveling onward. For example, I traveled from Bukit Lawang to Berastagi, a 5-hour drive. But you can also travel to other destinations. Prices are on average as follows: