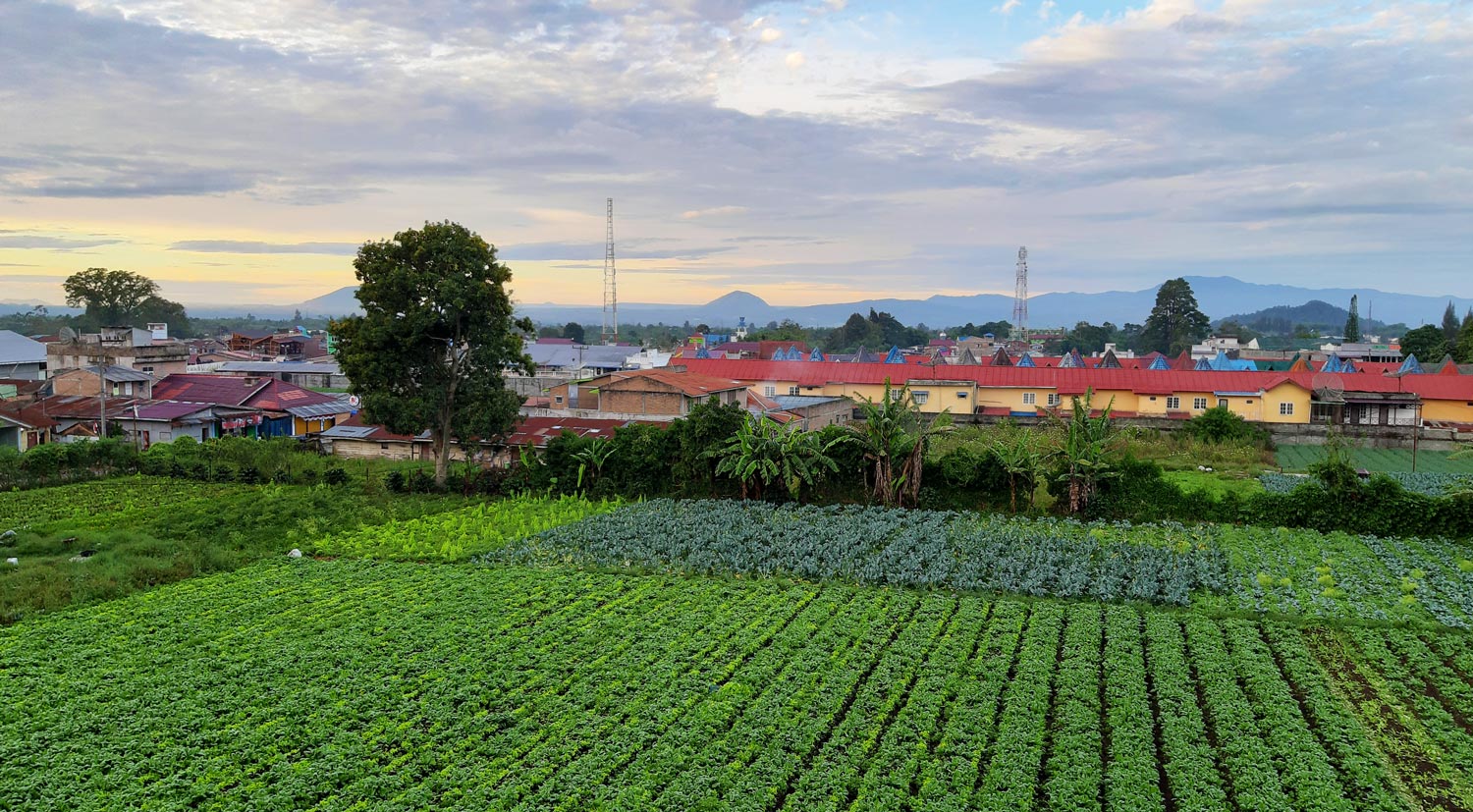 In August I made a great trip through North Sumatra. My main goal and bucket list activity was of course spotting orangutans in Bukit Lawang, but Berastagi was also planned. In this article you’ll read more about all the best activities in Berastagi.

Curious about a complete Indonesia itinerary for 2 months? Check it out here.

Berastagi is a village known for the nearby volcanoes: the Gunung Sibayak (2212 meters) and Gunung Sinabung (2460 meters). The village is a lot higher than many other cities in Sumatra (at an altitude of 1300 meters), which makes the temperature a lot more pleasant. It can also cool down at night, so bringing long trousers and a vest is recommended.

I decided to climb the Gunung Sibayak on my own and went out at the end of the morning. From the center of Berastagi I took a shared taxi van for 4000 IDR and dropped me off at the bus stop. I had the option to walk from here (about 3 hours) or take a shuttle bus to the starting point (100,000 IDR per shuttle bus). I decided to go for the latter option with a travel companion. From the starting point it was about an hour’s walk to the crater.

In the morning you generally have the best chance of clear weather and a nice view. Because I was there at the end of the morning, the weather wasn’t very good and it was cloudy.

The route was quite clear and quite easy. The first part runs through the forest. On the way I met some locals who liked to have a short chat and also wanted to take a picture with me. Halfway through I was joined by a friendly dog. I didn’t know exactly what he did here, but he seemed to be having a good time.

The smell of sulfur already came to me while walking and near the crater this was of course much worse. After about an hour of walking I arrived at the crater. The sulfur spurted out of the ground with a lot of noise. The last part of the walk was a bit more tough thanks to the many loose stones of different sizes. It was special to see that the stones had different colors, white, gray and yellow because of the sulfur.

Despite the clouds, I decided to walk down the path to the highest point. Occasionally the clouds drifted away a little bit, giving me a good view of the crater. In the crater were stones that people had placed in different figures or letters. I never ventured into the crater though.

When I walked back down and arrived at the starting point, I decided to hire the shuttlebus to take me to the guesthouse. After all, I didn’t feel like switching vans and walking anymore.

General tips for climbing the Sibayak

Other sights in Berastagi

In addition to climbing the volcanoes, you can also walk around the city center. You can go to the local markets for fresh fruit and vegetables. However, I didn’t find the center very pleasant, but the surroundings are beautiful.

At the Deep Art Cafe I had a very good meal and drank fresh ginger tea. I was impressed with different art on the walls and the family running the place was super friendly.

You could also visit Gundaling Hill from where you have a beautiful view on the volcano.

Since it was Independence Day, we were on the road quite early to avoid the biggest crowds. We paid IDR 700,000 for the taxi we shared with 4 people. The drive from Berastagi to Parapat (the harbour near Lake Toba) took about 4 hours.

There are quite a few accommodations in Berastagi, but the quality is generally not very good. I stayed 2 nights in Hotel Kalang Ulu which in my opinion was good value for money. From here you have a view of the volcanoes from the back.