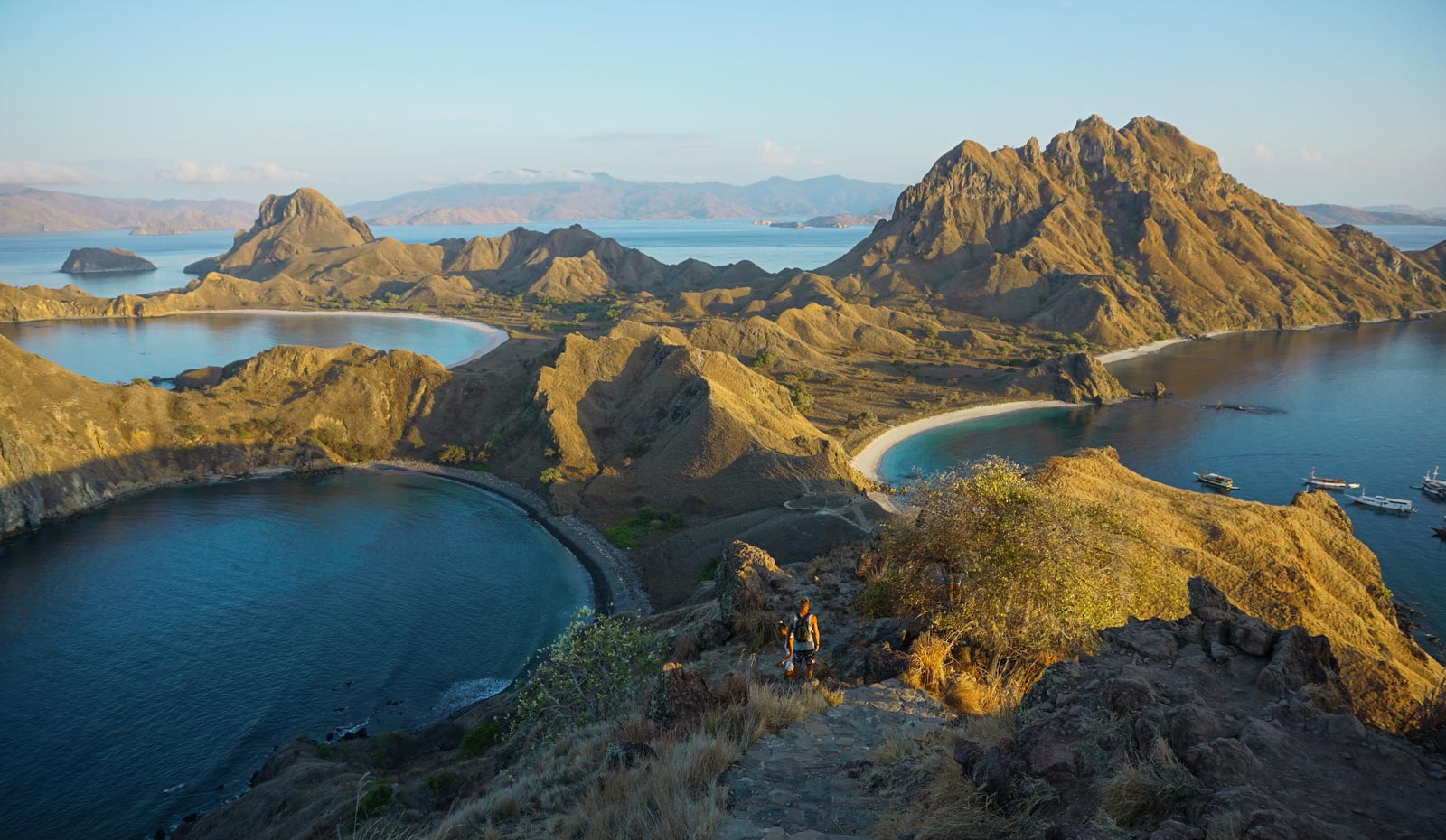 If you visit Indonesia, definitely consider visiting the Komodo National Park! This national park consists of three larger and a number of smaller islands and covers a total of 1,817 km². White beaches, pink beaches, azure blue sea full of colorful sea life and great viewpoints. To discover these beautiful islands, I took a great four day boat trip from Labuan Bajo in Flores with Lombok as final destination. Before getting on the boat, I did an awesome road trip on the island of Flores to never forget. A very big recommendation! This road trip is very good to combine with the boat trip, because the boat trip starts (or ends) in Labuan Bajo in the west of Flores.

You can find a complete Indonesia itinerary of 2 months here.

Got excited about this travel video? Then read on!

The day started early. When my alarm went off at about 6:00 am, the light was already shining through the window of my dorm. At 7:15 am I was at the organization’s office in Labuan Bajo with all my stuff.

Because I was traveling at the end of the high season (in September) 30+ people were divided over three boats. Together with 9 others I was placed on the smallest boat. Quite a bit of luck, because the size of the groups can reach 25 – 40 people. Because we were a small group, everyone had enough space on the deck.

We passed countless small islands that emerged one by one from the azure blue sea. The first island we set foot on was Rinca Island. Rinca Island is one of the two islands in the Komodo National Park where the famous Komodo dragons live.

And it wasn’t long before we spotted the first dragons. How big those animals are! After walking on the island for 10 minutes, we even witnessed the pairing ritual of two those Komodo dragons.

We made a short hike on the island until we reached a viewpoint. Fortunately, the hike was short, because it was very hot. Fortunately we were able to recover afterwards on the boat with a big lunch.

We took a break from this delicious lunch on Pink Beach. And as the name suggests, this beach is a bit pink. This is due to super small pieces of red coral that have mixed with the white sand. In combination with the azure blue sea, this is a feast for the eyes.

But not only the beach is beautiful, also the underwater world is beautiful. While snorkeling I swam among the most colorful fish armed with my action camera. At one point, even a sea turtle came to say hello.

On Komodo island we would spot the Komodo dragons for the second time. During the short hike we saw some, but not as many as on Rinca island. In addition to the Komodo dragons, there are also various bird and snake species. One of the guides saw a cobra getting away, but unfortunately we were too late to see it.

After our visit to Komodo Island we sailed towards Padar Island where the boat was anchored for the night.

The first night at sea took some time getting used to the sea. I usually get car and seasick quite quickly and even if the boat is anchored, there is still a lot of movement. Fortunately, there was plenty of fresh air on the deck, which allowed me to sleep reasonably well on my thin mat.

Day two started a bit earlier than day one, because today we climbed to the highest point of Padar island before sunrise. However, we were not alone, but shared the island with hundreds of other tourists. It was about half an hour uphill and after a fairly restless night this was a bit harder than expected.

Although I had seen the view from Padar island countless times in photos, it felt very special to experience it in person. From the highest point you have a beautiful view of the three large beaches of Padar island. Did you know that all three beaches have a different color?

Unfortunately the island was quite dry and brown because I was there at the end of the dry season. Nevertheless, it was completely worth watching the sunrise here.

If you think Pink Beach is the pinkest beach in Komodo National Park, then you are wrong. Long Beach is even more pink! Long Beach is part of Padar island. Here too it was beautifully snorkeling and blissful swimming in the crystal clear water.

After our visit to Long Beach we set sail for Moyo island which is part of Sumbawa, about 14 to 17 hours of sailing. I relaxed on the deck and enjoyed the passing landscape.

After a while sailing we passed Sangeang island where an active volcano is located. Every now and then this giant spits out a big plume of smoke. Very cool to see!

At one point we also saw dozens of dolphins swimming in the distance that were getting closer. Until they swam right in front of our boat and played with the waves. Very cool to see!

After dinner it was at least 8 hours sailing. That promised to be a tough night. As a precaution I took a motion sickness pill with a beneficial side effect that it made me drowsy. We decided to turn the mats on the deck so that we were the length of the boat and we were, as it were, rocked to sleep by the waves. That worked a lot better than sleeping the other side around, so that your head continuously moves up and down on the swell.

It was also waking up early this morning, but unplanned. Around 5 o’clock there was “MANTA, WHITE MANTA, WAKE UP!” called from below deck. Most of us didn’t let them say that twice and in no time we were down with our sleepy heads.

And it was not just any manta ray, but a white giant manta ray! And no, it was not one, but two. Everyone watched in amazement as these two meter-sized giants “flew” through the water. How magical that was. Do you know that feeling of joy, enthusiasm and additional adrenaline when you see something special?

Since Manta Point was closed to large boats a few weeks before our trip, we thought the chance of spotting mantas was very small. That’s why we were even more enthusiastic now.

As we all floated silently in the water and tried to ignore the constant painful stinging, the mantas swam straight at us and made a turn at the last minute. Fantastic!

After lying in the water for about 10 minutes, I couldn’t take the stinging anymore. They became more painful at the time and it didn’t make me happy when those jellyfish hit my lip, ouch!

During breakfast on the boat, everyone still spoke enthusiastically about this great experience. One thing was certain, our day couldn’t go wrong anymore.

Not much later it was time to visit Moyo Island and climb the waterfall on this island. Thanks to certain minerals in the water, a rough layer remains on the stones, making the waterfall fairly easy to climb. At the top of the waterfall we were able to swim and with the help of a rope to jump into the water.

From Moyo island it was a few hours sailing to Bedil island; a tiny island near the coast of Sumbawa. Only one family lives in this paradise spot. It was an afternoon to relax on the white beach between the palm trees.

In the evening we sailed to the uninhabited Kanawa island. Here we ended our last evening with a beach party.

On the last day we got up early as usual (after a short night). This time to watch the sunrise on Kanawa island. It wasn’t the crew that woke us up, but we happily dragged the crew out of their cozy beds.

The hike on Kanawa island was fortunately not so difficult and we all enjoyed our last sunrise together.

After a few hours at most we docked in Lombok. We got in several vans and were driven to the office in Mataram. From there we were taken to our self-chosen final destination. That is how I arrived in Gili Air at the end of the afternoon.

I made this four day boat trip in the Komodo National Park with Wanua Adventures. They only offer trips from Flores to Lombok and from Lombok to Flores. Would you like to make a one- or multi-day boat trip starting and ending in Flores, then you have more than enough choice in Labuan Bajo.

It doesn’t really matter in which direction your boat trip goes. You see the same things on both routes. In general, the boat trip from Flores to Lombok is a bit more relaxed. This is because you largely sail along with the waves on this route. In addition, you don’t sail very long on the first days, which makes it easier to get used to the swell.

After having lived on a boat for so many hours and days, I noticed that I got ‘land sick’ when I was on one of the islands. The first night on Gili Air, I was still swaying in bed.

Before taking the boat trip, I could choose to sleep in Deck or the slightly more expensive Cabin Class. With Deck Class, you naturally sleep on the deck with other tourists. However, a number of Cabins were also on board; super small rooms with a double bed. These Cabins are located below deck near the engine and it can get very hot. If you don’t mind sleeping in a room with others, I would definitely recommend Deck Class.

Do not expect luxury on board. We all slept on a thin mat with a small cushion and a blanket. Perhaps it was better not to know when these were last washed. However, on board there are the necessary things such as a toilet and water tank and a shower with a little luck.

Since this boat trip in Komodo National Park starts at Flores and ends at Lombok, you just take all your luggage on the boat. In any case, make sure you have (swimming) clothes and enough sunscreen.

An action camera can also be fun if you like to capture the beautiful underwater world of Komodo National Park.

In addition, my doctor advised to take preventive malaria pills. Because I already had to do this during my tour of Flores, I just took them during the connecting boat trip.

Do you sometimes get car or seasick? Then don’t forget to bring travel sickness pills.

It certainly doesn’t hurt to stock up on a large amount of snacks, because you can not get them on board. Soft drinks and beer are also recommended to buy in advance. In principle, breakfast, lunch and dinner are sufficient, but after swimming I often felt like eating a snack.