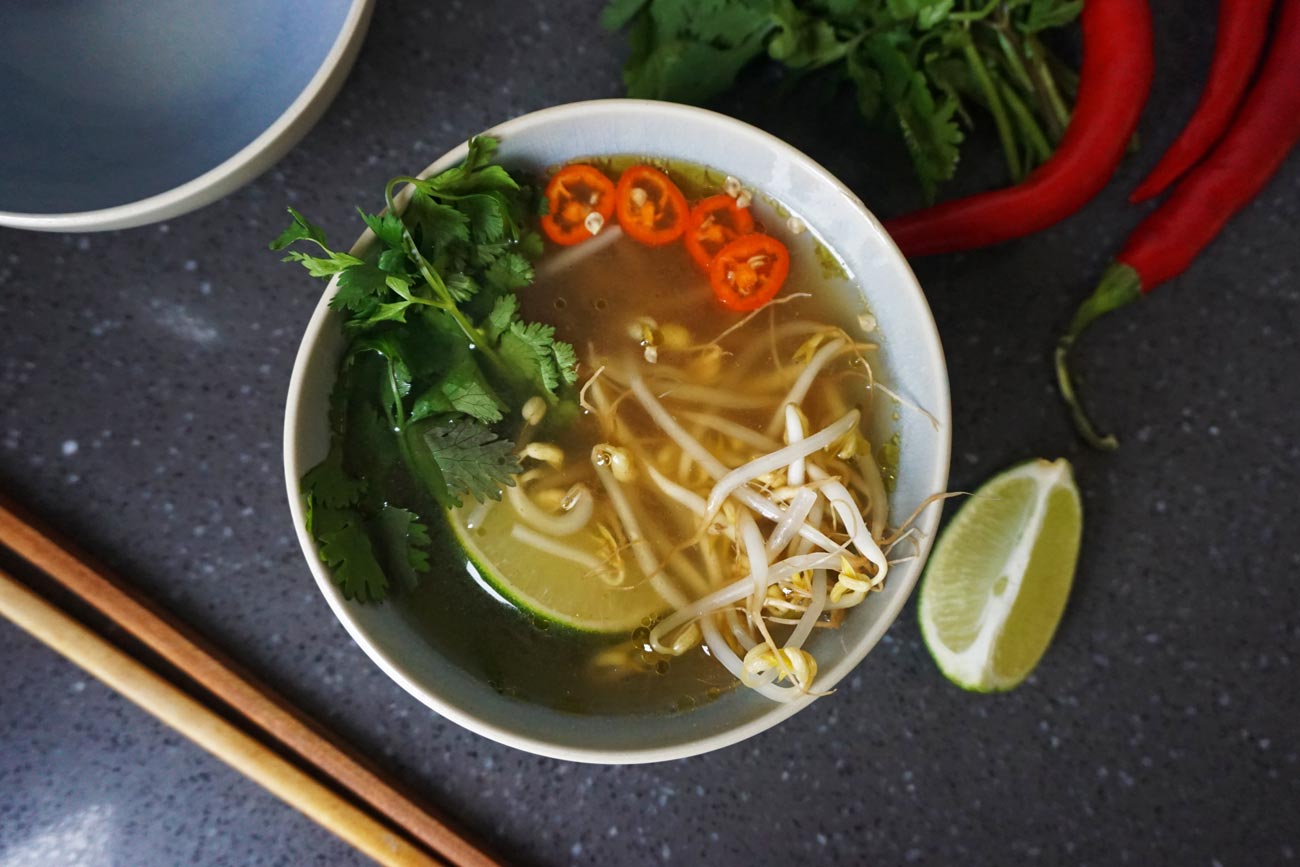 In Vietnam they eat it almost every day: Pho Bo, literally translated as “beef noodle soup”. This Vietnamese beef soup is super tasty and also healthy. It contains various fresh vegetables. Even when I was in Vietnam I regularly ate this soup for lunch, dinner and sometimes even for breakfast. In fact, pho is considered Vietnam’s national dish. During my 1 month Vietnam itinerary, I learned how to make this delicious soup myself during a cooking course.

There are different versions of Pho Bo including a fast version and a traditional version. The recipe below is how to make traditional Pho Bo. It’s a pretty simple recipe that anyone can make at home. When I remade this recipe at home, I imagined myself back in Vietnam again. The taste really matched with how I could remember!

When plating the soup bowls, raw tenderloin is being used. When the hot soup is poured over the pieces of meat, they cook until they’re beautifully tender.

Start by rinsing the beef bones with cold water. Next put them in a large cooking pot with about 2.5 liters of cold water and bring to a gentle boil.

After a few minutes of boiling, you can take the foam off with a skimmer. To get a very clear soup, drain the bones, replace the water and wash the pan thoroughly to remove any excess foam. The amount of foam depends on the quality of the bones, sometimes skimming is enough.

Optional: Line a baking tray with aluminum foil. Cut the onions in quarters, crush the cloves of garlic and halve the ginger and place on the baking tray. Roast them for about 10 – 15 minutes until they’re brown. Thanks to this step, the flavor is released better when you add them to the soup.

Next add the cinnamon stick, cardamom, star anise, cloves, coriander seeds and fennel seeds to a dry skillet. Bake over medium heat until fragrances are released. Place the roasted herbs in a cotton spice bag or cheesecloth and tie with butcher wire.

Add the spice bag and the (roasted) vegetables to the pan with hot water and the bones. Pour the fish sauce into the pan as well, just like some salt. Let it simmer for about 3 hours. You can remove excess foam during cooking with the skimmer.

After about 3 hours, remove the bones, vegetables, and spice pouch. Pick the meat off the bones with a fork and put this tender meat back into the soup. For a clear soup, pour the soup through a sieve into another pan.

Cook the rice noodles according to the packaging and then spoon them into a bowl. Cut the raw tenderloin into thin slices and place on top of the noodles. Finally, pour the hot stock over it and add a handful of fresh coriander, bean sprouts, a few rings of chili pepper and a wedge of lime.