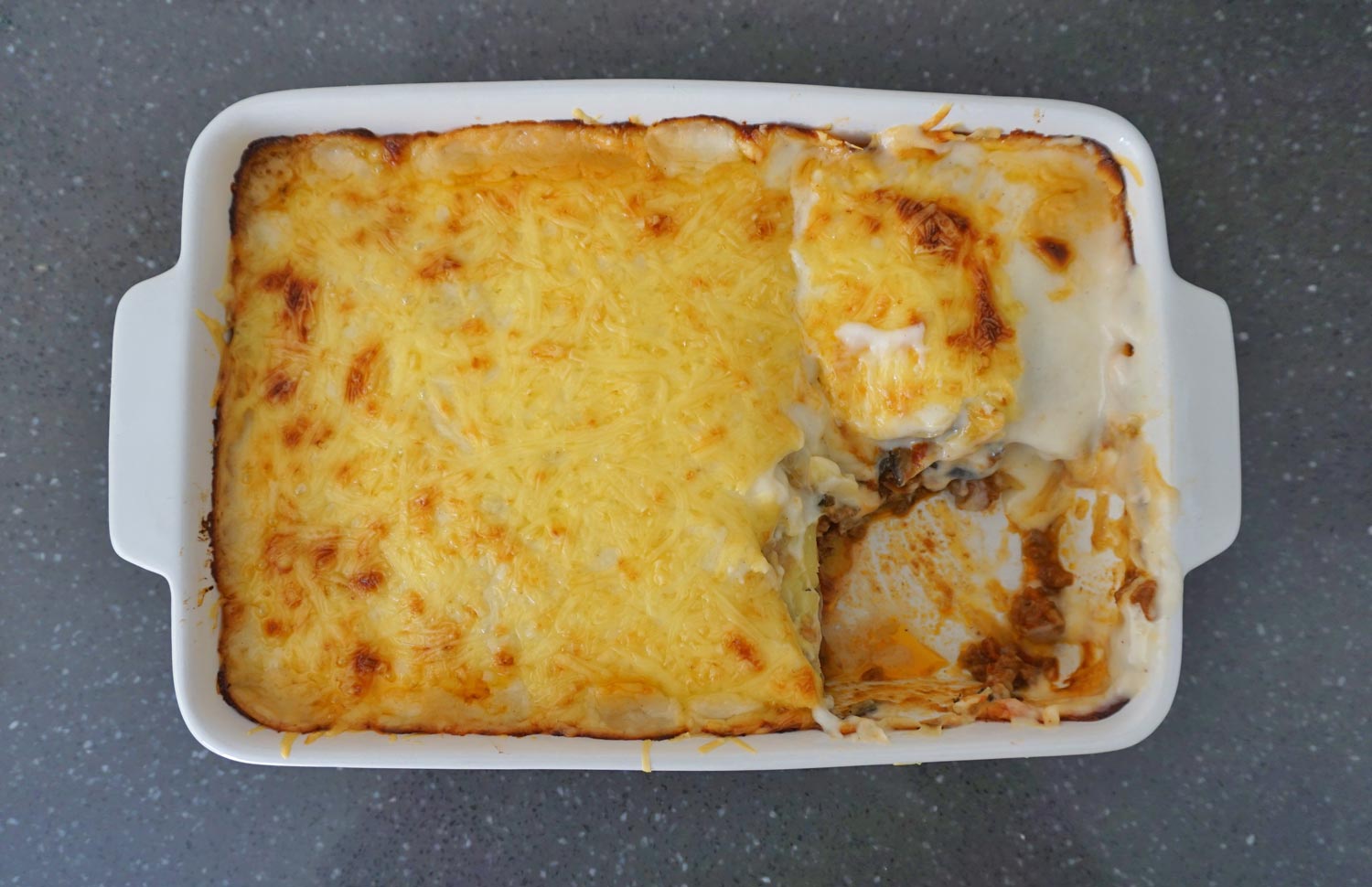 Moussaka is one of my favorite Greek recipes. When I eat out at a Greek restaurant, I often order Moussaka or Souvlaki, which I also really like. In addition, Tzatziki is also a big favorite because I just love garlic. During my city trip in Athens, I also tried the real Greek Moussaka and it was very tasty!

Moussaka is somewhat reminiscent of lasagna in terms of layering and using tomatoes and bechamel sauce. Although I now think that Moussaka has my preference since I discovered this dish.

It takes some time to make this dish, because you have to follow a number of different steps, but trust me, the end result is definitely worth it!

Begin with baking the finely chopped onions along with the bay leaves. Bake them over low heat until translucent but not brown. Then add the crushed garlic and the minced meat. Fry the minced meat and pour the mixture through a sieve or drain on kitchen paper to remove the worst fat.

Then return the minced meat mixture to the pan and add the tomato paste. Deglaze the mixture with a (large) dash of white wine. Simmer everything until most of the liquid has been absorbed.

Add half a can of tomatoes together with the oregano and cinnamon. You can also add the whole can if you like a bit of a wet Moussaka. Let it boil and season with salt and pepper. Finally, take out the bay leaves. Turn off the heat.

Peel the potatoes. Slice the potatoes and eggplant lengthwise. Fry the slices in a frying pan with a little oil until they are slightly cooked. If you use pre-cooked potato slices, these don’t need to be pre-baked.

Finally, make the béchamel sauce. Melt butter in a pan. Then add the flour and stir well. Finally, gradually pour in the milk while stirring. Let the sauce boil until it thickens slightly and turn off the heat. Finally, add the Parmesan cheese, a pinch of nutmeg and cinnamon.

Now you can start layering the Moussaka. Grease an oven dish and start with a layer of potato slices (about half of the potatoes, but make sure to cover the whole bottom). Spread the minced meat sauce over this and press firmly. Then divide the slices of eggplant over the mixture and finish with the rest of the potatoes. Finally, pour the béchamel sauce over it and sprinkle a lot of grated cheese on top.

Fancy an evening with different Greek dishes? Then take a look at all Greek recipes.