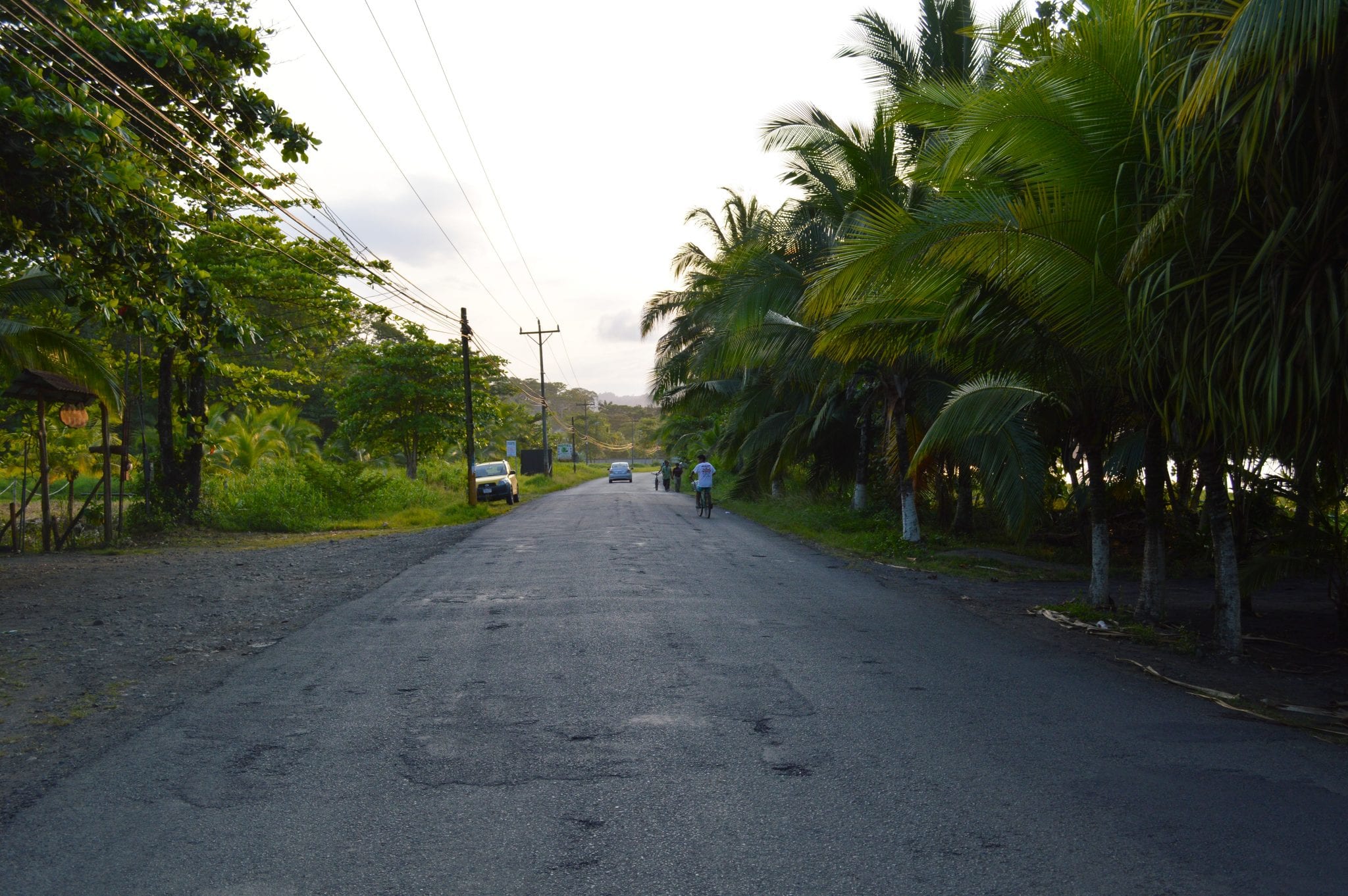 Costa Rica is the perfect destination for backpacking. It’s also a fantastic destination if you love nature and wildlife. More than a quarter of the country is national park. Backpacking in Costa Rica is something you must’ve done in your life!

The Ticos (as the Costa Ricans call themselves) are generally very friendly people who are happy to help you. There’s a wonderfully relaxed mentality in the country. Nothing have to be on time and you’ll hear “Pura Vida” everywhere. This literally means “pure life”, but the Tico’s mainly mean that you have to enjoy life. This atmosphere makes backpacking in Costa Rica super relaxed.

This backpack itinerary in Costa Rica can be completed in at least 10 days, but you can also take 2.5 weeks to do this. In hindsight, I thought it was just a little too short for 10 days, so I recommend to travel at least 2 weeks in Costa Rica.

After a long flight, our journey started in the capital San Jose. At the exit of the airport, the taxi drivers were ready to offer us a ride. The official taxis can be recognized by the red color with a yellow triangle. They can give you a price in advance. You have the choice to negotiate or to have the meter turned on.

After our long journey we really didn’t feel like negotiating anymore, so we drove on the meter. Half an hour drive from the airport by taxi costed us $ 28. We’ve traveled little by taxi, but mainly with buses.

In the capital San Jose, besides a few museums, there’s isn’t actually much to do and I recommend visiting it only on the way. The day after arrival we immediately left for our next destination: Puerto Viejo.

This laid back little village on the east coast is about a 5 hour drive from San Jose. The village is a must-visit while backpacking in Costa Rica. There is plenty to do and discover beautiful beaches for a few days. Read more about the top sights in Puerto Viejo.

We continued our journey to Quepos. This town on the west coast is about a 3.5 hour drive from San Jose and is close to one of the most beautiful national parks in Costa Rica. This national park is therefore no longer undiscovered, but there’s still a lot of wildlife to see. Read more about Quepos and the Manuel Antonio National Park.

After Quepos we left the coast and traveled inland. We visited the town of Monteverde, where we even went ziplining through the Monteverde Cloudforest Reserve. Walk on the fantastic suspension bridges through the jungle and discover the area in the evening during a night tour. Read more about the sights in Monteverde and the beautiful cloud forests.

We visited Costa Rica in late April. This is a great travel time because the rainy season has just started and there are fewer tourists than in the high season. The rainy season starts in May and ends approximately in November. Costa Rica has a tropical climate, so there is generally high humidity and high temperature. The days start early (sunrise a little after 5:00) and also end quite early (sunset around 5:45 PM).

The currency in Costa Rica is the Colón. € 1 is about 693 columns (Feb 2019). You can also deal with dollars in Costa Rica, although you don’t have a favorable rate with this. Taxi drivers often calculate the fare in dollars, but after asking he converts it to Colon so it’s often slightly cheaper. Download an exchange rate app that also allows you to calculate the exchange rate offline.

Don’t forget to set your debit card to “world” before backpacking in Costa Rica. It’s best to get your money at the Banco National ATMs. We weren’t successful with other ATMs because the machine continuously gave an error message. To be on the safe side, also bring a credit card. Many hostels accept credit card and cash (often both dollars and Colon).

When you go backpacking in Costa Rica you’ll use a lot of buses. They’re very cheap for the travel distance. Often you won’t spend more than € 10. Don’t expect the buses to always run on time.

American school buses are often used for short distances. The buses for longer distances are a kind of tour buses and look great; the windows can be slid open and the seats are pretty good. There’s not much space for your legs and your bag though.

Never store your backpack in the racks above the seats, but always between your legs or on your lap. It’s preferable to put your leg or arm through the handle before going to sleep. Otherwise, there is a chance that it will be stolen during the bus ride. Large bags and backpacks are great in the cargo hold (or with bad luck on top of the roof). Sometimes your bag is provided with a label in the cargo hold that gives you the matching ticket. However, the tickets are no longer checked when unloading.

Since most major roads go through San Jose, you almost always travel by bus through this city to get anywhere. Buy your bus tickets only at a counter and not from sellers on the street. Keep your bus ticket and passport with you in the bus and not in the hold. Sometimes there’s a ticket check or check by the police on the bus where you must be able to show your passport.

One of the major bus companies for the longer distances is Mepe; fine buses in which the windows can opened. We also traveled with Tracopa. This bus had an air conditioner! At least until 2017 exceptional in Costa Rica.

Use the busschedule website to plan your trip globally. The departure times of the buses change quite often in Costa Rica, so keep this in mind to what extent possible.

The Tico’s love chicken, they LOVE it. They actually always prepare it on the bone, which makes it very tender. In Costa Rica you often get a whole plate full of chicken with rice for a small price.

Costa Rica is easy to reach from the neighboring countries Panama and Nicaragua. Due to time constraints, we decided to only backpack in Costa Rica and not these countries. More than half a year later I also visited Panama, also a great experience! Read all about my itinerary in Panama.

The two most famous and largest international airports are San Jose (Juan Santamaria) and Liberia. You can choose to stay in Alajuela (the city where the airport is located) because San Jose is not very special. Pay attention to the bus routes! Buses do not always stop in Alajuela although this is sometimes indicated.

We flew on the way to San Jose with a transfer in Panama and on the way back with a transfer in Mexico City (total flight time of almost 12 hours, total travel time of almost 20 hours). They also fly to Costa Rica without a stopover. If you want a cheap ticket, prepare for a few layovers. When booking, pay close attention to the number of transfers, the transfer time and the location of the transfer. The transfer time should be at least a few hours. For example, in Mexico City, we had already spent about 2 hours arranging our boarding passes that they forgot to print in San Jose.

The location of the switch is also important. For example, if you transfer in the United States, you are required to apply for an Electronic System for Travel Authorization (ESTA). This costs € 25. But such an ESTA does not provide guaranteed access to the US because customs can still reject it.

You will also need proof of onward travel to enter Costa Rica, such as a return ticket. When entering different countries, a paper flow comes towards you on which they want to know everything about your stay and why you want to enter in the country. For example, don’t bring fruit! You can get a hefty fine for this, which I fortunately managed to escape thanks to my innocent smile.

Costa Rica is one of the safest countries in Central America. I felt very safe while backpacking in Costa Rica. Only in Alajuela, the town near San Jose, I didn’t feel very comfortable at night.

Something that cannot be missed from your list is a mosquito net and mosquito repellent against the terrible mosquitoes. They are present in large numbers, especially on the east coast. Malaria even occurs on the northeast coast. Not all hostels have a mosquito net, so it doesn’t hurt to bring one yourself. Always apply sunscreen in the morning and after half an hour, if it has been absorbed, apply DEET.

Also, a sleeping bag liner (thin sleeping bag for the tropics) and your own pillowcase are not an unnecessary luxury if you stay in the, not always clean, hostels. If you travel inland, bring warm clothes. It can be a lot cooler in the mountains and inland than on the coast. Don’t forget a raincoat or poncho. There can be heavy rain (even outside the rainy season). Binoculars can also come in handy, especially in densely wooded areas, such as inland. Here you’ll mainly spot birds and that’s just a bit easier with binoculars.

During my trip I occasionally filmed some small fragments with my camera. At most times when traveling I don’t think about filming, because I’m enjoying the moment. However, I always take a lot of photos. How wonderful it is to get that same feeling back when you view these photos at home from your computer.