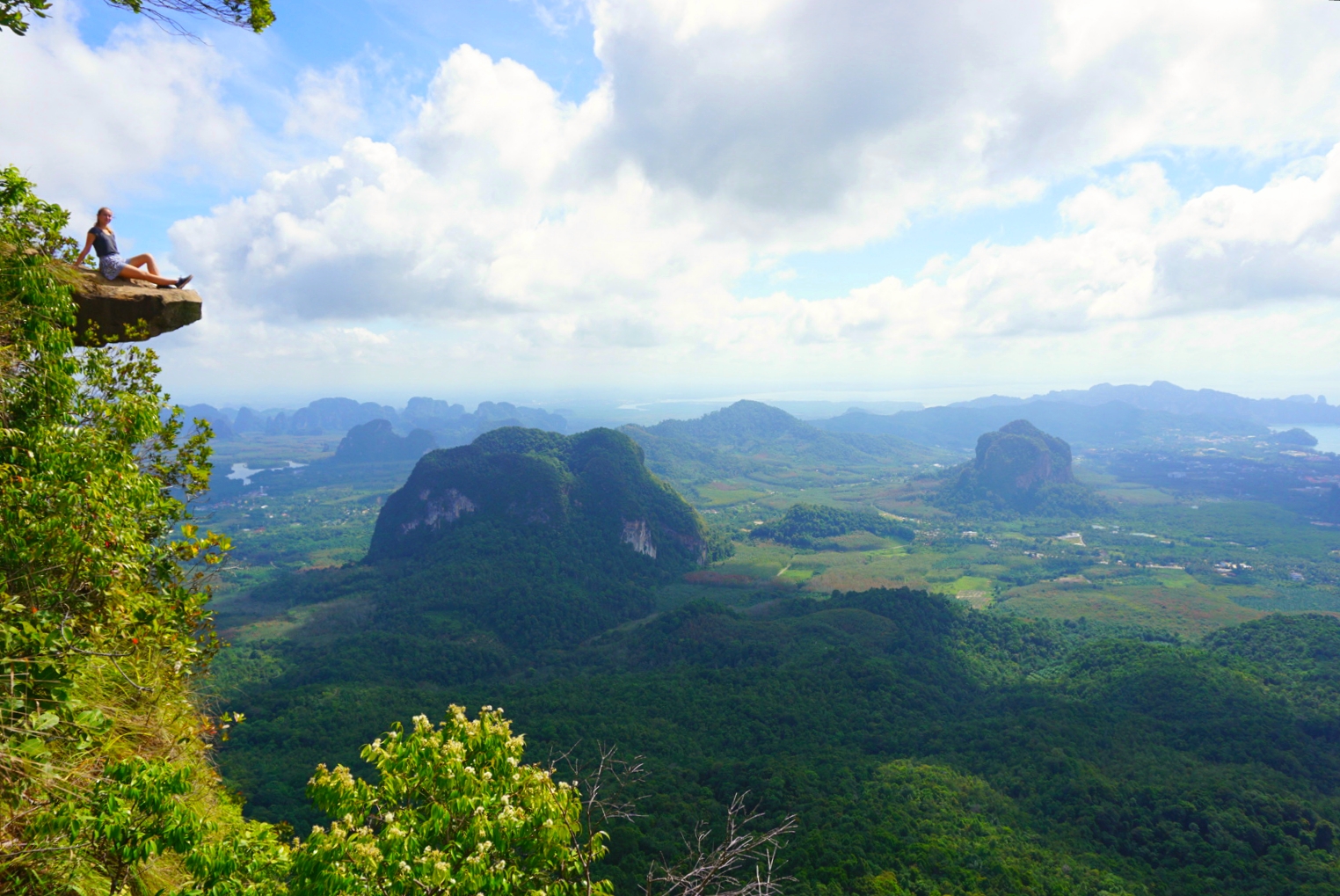 Krabi’s most beautiful viewpoint is without a doubt the Dragon Crest Viewpoint, or the Khao Ngon Nak Viewpoint from the Ngon Nak Mountain, also known as the Dragon Crest Mountain. It’s quite exhausting, but it’s definitely worth all the effort! It’s one of the best things to do in Krabi.

This impressive Dragon Crest mountain is located in the Hat Noppharat Thara National Park. The viewpoint is no less than 498 meters high.

After a nice route to the park, I parked my motorbike in a row with other motorbikes. The park rangers are quite strict. On arrival, you have to list your name, phone number and arrival time. When you return you write down the current time again. If you return too late (after closing), you will have to pay a fine.

The park ranger told me it’s about 2 hours to the top and 1 hour back.

A bit hesitant for the long climb, I started the hike. The path is clearly marked and in good condition. After a while you have to walk / climb up on the tree roots, making the route a bit more difficult.

So far, I’ve been doing well. I walk up with a brisk pace. My 7-eleven purchases keep me going too.

After 45 minutes, my effort was rewarded with the first viewpoint. The view was amazing already! About 10 minutes later I arrived at the second viewpoint while sweating heavily. At these viewpoint I just stopped for a while, whilst enjoying the incredible view over Krabi.

Fortunately, after the two viewpoints, the route becomes less steep and it was a bit more doable. About half an hour later I finally reached the top.

Wow, what a view! My effort was well worth it. The clear weather allowed me to see incredibly far and I saw a beautiful green area where the impressive limestone mountains skyrocketed in several places. In the distance I even saw the blue sea with some islands.

After enjoying the view I saw the famous protruding rock over the ravine. I really had to take a picture there! It’s easy to walk to the place and it’s possible to hold on to a rope. Always be careful when taking the photos! Don’t do anything stupid.

What a great view!

The way back was half an hour longer than the park ranger told us. With my brisk walking pace, I couldn’t definitely do this in an hour. I met more people on the way down than on the way up. It’s clearly more crowded at the end of the morning.

Once down I put the time back on the list. It took me just over 3 hours to finish the entire route. Not bad.

My motorbike is now built in between many other motorbikes. There are now 3 large rows instead of 1 row.

The starting point of the viewpoint is easily reached by motorbike from Ao Nang in about 40 minutes and from Krabi Town it is perhaps 15 minutes longer.

If you prefer not to ride a motorbike, taking a taxi is the only option.

View the starting point on maps.