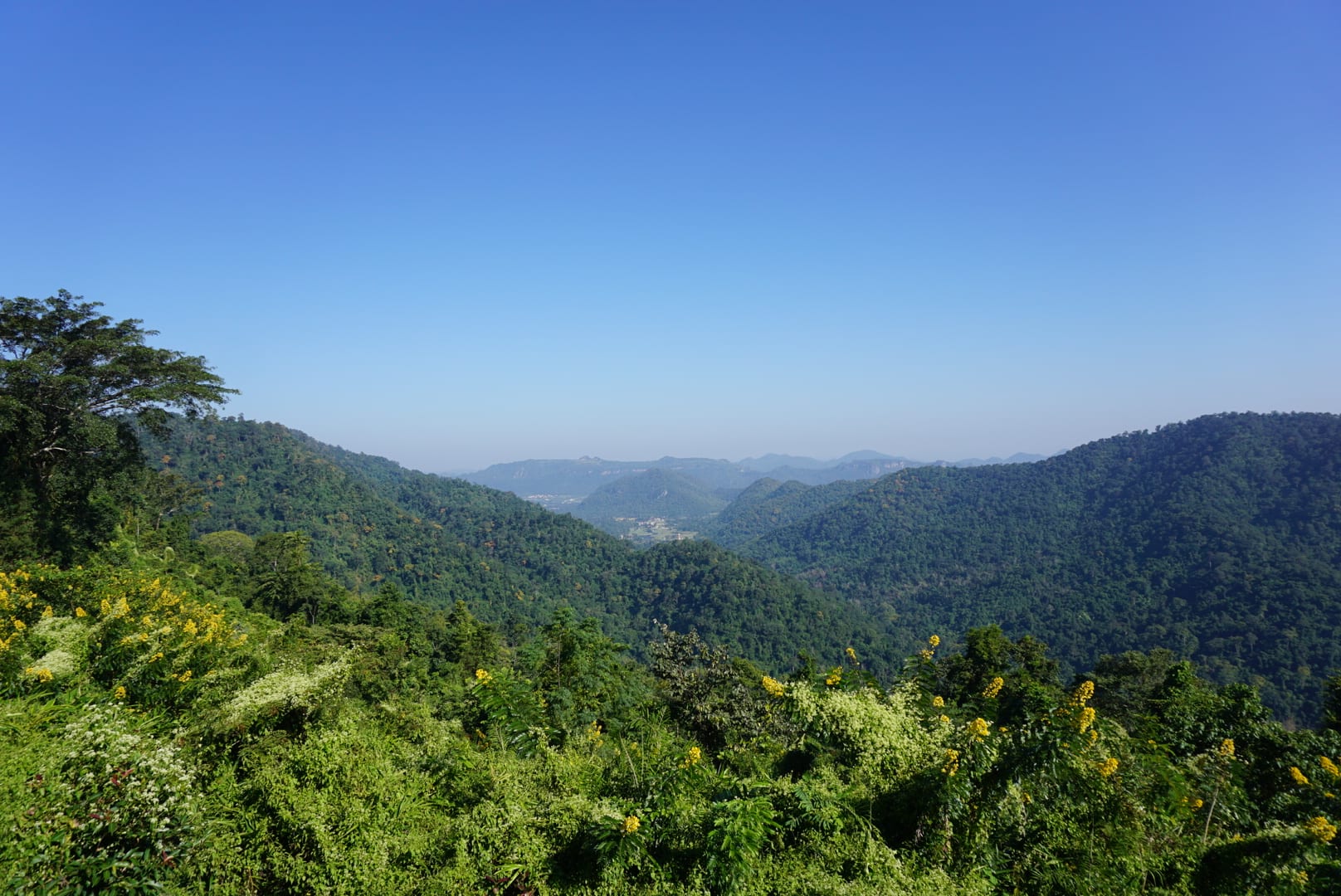 From the nearest town of Pak Chong it’s about half an hour drive to the national park. The road through the national park is very winding and hilly and you will encounter beautiful viewpoints along the way.

Near Pak Chong there’s a spring where you can cool off in the blue water. This spring is mainly frequently visited on weekends by locals who come here for picnics and swimming.

Before embarking on a trekking tour in Khao Yai National Park with a guide, you should wear leech socks. These socks protect you against leeches and ticks that are frequently present in the jungle. Especially in the rainy season there are many leeches in the national park. During our trekking in the dry season I only saw one leech on the trail.

While driving our guide was busy looking for animals. A while later he stopped the car and quickly jumped out with his telescope on his back. When we looked through the telescope we saw our first real hornbill bird, wow! A little later he flew away and I was able to shoot this beautiful picture.

During our hike through the dense jungle we encountered different animals. Our guide spotted a well-camouflaged brown tree lizard and a few moments later we saw several gibbons waving between the branches. The telescope allowed us to admire it very well. He also spotlessly spotted a green poisonous snake between the leaves. It took us all a few minutes to spot it.

Wild elephants also inhabit the Khao Yai National Park which makes this park quite special. With a lot of luck you can spot these beautiful animals in their natural habitat. Unfortunately we didn’t have that luck.

There are many caves in Khao Yai. In the evening, all bats fly out of the caves in search of insects. We saw no less than 2 million bats leave the cave in a row. This flow of bats didn’t seem to end.

There are several waterfalls in the national park. The Haew Suwat Waterfall is probably the most popular waterfall. The water flows down on both sides of a huge rock. This Haew Suwat waterfall is frequented by locals and tourists to take beautiful pictures.

The Haew Narok Waterfall is located deeper into the national park. It’s a long walk in the heat, but the view is more than worth it. The water clatters down from a height of no less than 60 meters. It’s an amazing sight to see such a large amount of water splashing from such a great height. Especially in autumn, this waterfall is at its most powerful and most beautiful.

The most fun is to visit Khao Yai through a tour. It is possible to rent a guide at the national park where you do a trekking.

How to get to Khao Yai National Park

It’s also possible to take the bus from Bangkok to Pak Chong. These buses leave from the Mo Chit Bus Terminal in Bangkok. Tickets can be bought at ticket counter 49. These buses leave every hour and the journey takes about 3.5 hours.

It’s not recommended to take a minivan because they often drive very dangerous.