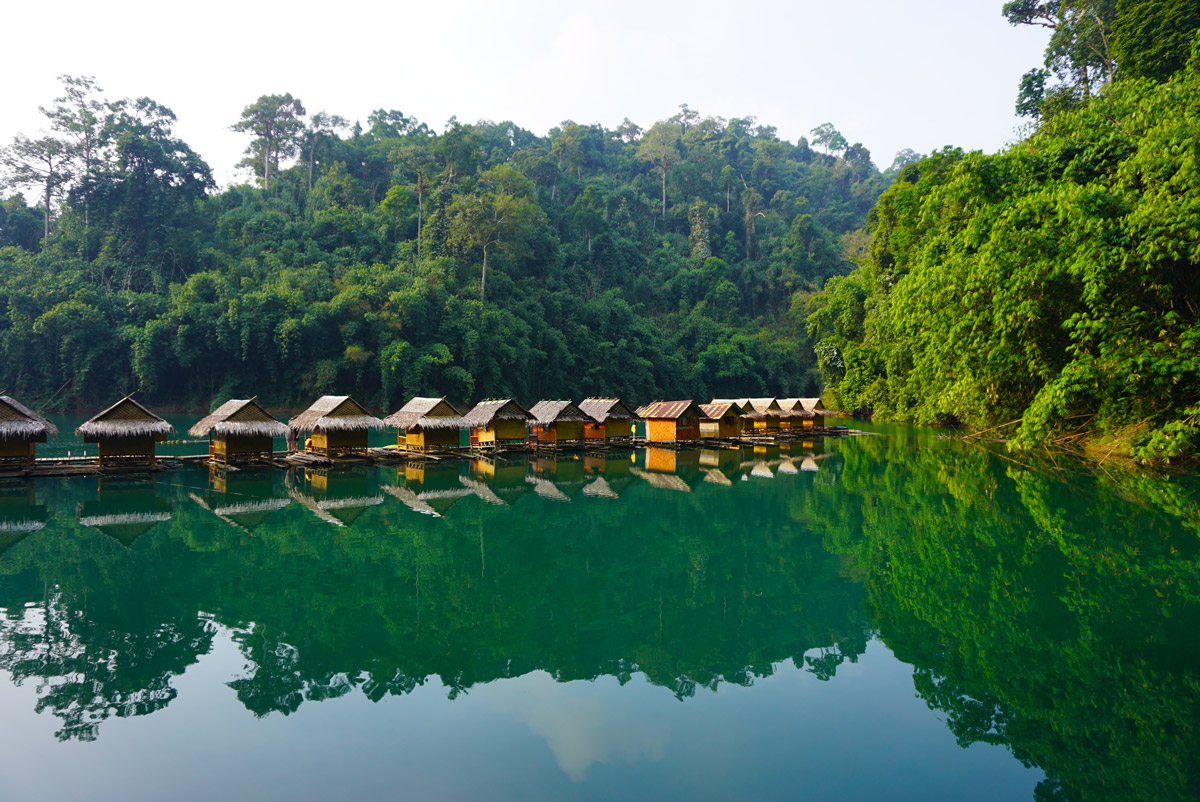 It’s recommended everywhere and by everyone: the Khao Sok National Park in Surat Thani Province in Thailand. I therefore had very high expectations when I visited this park during my trip through Thailand. With high expectations, you might think it can only be disappointing. And it actually did a little bit! But not necessarily because I did not like the surroundings, on the contrary! The environment was amazing!

Check out my entire Thailand itinerary in 5 weeks here.

Travel is not always rosy, even it sometimes seems that way if you believe all those beautiful Instagram-photos. That’s why it’s also good to mention the less pleasant experiences from time to time. Why my visit was disappointing, I’ll tell you in this article. But first we start with the facts and the fun things about the Khao Sok National Park!

Khao Sok national park was established in 1980 and is the largest in Surat Thani province. It’s known for the ancient jungle and the insanely large blue reservoir. The mountains surrounding the lake are all completely covered with forest where there are many different animal species, including monkeys, birds, snakes and even elephants.

The nature in the Khao Sok National park is really stunning.

When I booked the tour at my guesthouse, I was given a choice between two activities on the first day: a water cave tour (Nam Talu Cave) or a viewpoint. Since I already visited a reasonable number of viewpoints in the past few weeks, including the Dragon Crest Viewpoint, I chose the water cave tour.

After a while sailing through the beautiful surroundings towards the cave we docked. We had to walk about 30-40 minutes through the jungle to reach the cave entrance. A tough, but beautiful trip.

During the first 10 minutes of walking through the cave, the water came just up to our ankles. Here and there, the guide pointed out some nasty big spiders on the stones and at one point we saw hundreds of bats hanging over our heads. We walked more and more through the water and it became a bit deeper. Until we really had to swim. And it was quite cold, but very cool!

It was a fun experience. During the dry season its’possible to visit the Nam Talu Cave, but during the rainy season you cannot visit this cave, because that’s very dangerous because of the flooding hazard.

Cabins on the water

Wow, what a view I had from my cabin! The water is beautifully blue and the surroundings are incredibly green. Its’also lovely to take a swim here. This was my view while brushing my teeth in the morning. Quite cool right?

Now it’s time for the less lovely aspects. Let me put it this way, the tour was not entirely flawless.

Our guide was not the nicest person. When we were assigned a cabin on arrival, two travelers stayed in a cabin that apparently was meant for us. Of course they knew nothing about that, but our guide was incredibly angry with the couple and started yelling at them. Not a best first impression …

The two-day tour felt very rushed. On both days it was boat in, boat out. In total we only had half an hour to ourselves in the afternoon. Very unfortunate, because I would have loved to swim longer and canoe! In my opinion, other travelers have had a completely different experience where they were able to canoe and swim at their leisure in addition to the water cave tour. But maybe I’m wrong?

I was also really looking forward to the boat safaris, because I love spotting wildlife. The problem was that the boat sounded like an airplane taking off. Don’t expect to spot that many animals, because they’re gone before you’re even close.

Despite the noise, I spotted several monkey species, bird species including 2 hornbills and an eagle (I think?) And a wild boar. A miracle! Unfortunately the guides weren’t showing any enthusiasm at all and we couldn’t expect some information about the animals and the national park. After 3 months of traveling, I was kinda used of getting little information, but this was next level, in a negative way.

There are many different huts in different locations in the Khao Sok National Park. From reasonably luxurious (private bathroom and windows) to mega basic (bamboo with a thin mattress without mosquito net and mouse droppings). I stayed in the last huts. Fortunately, I don’t mind sleeping a few nights basic and had already prepared myself for this. But the bedding smelled and looked anything but clean …

I’ve seen a lot of dirty toilets during my 3-month trip through Southeast Asia, but these shared toilets were very dirty. Critters walked everywhere. On the floor, walls and on the toilet. And toilet paper, what is that?

But the real sour taste …

During the cave tour we left our stuff in the cabin, which were not allowed to bring with us. There was no lock on the huts and I hadn’t thought about bringing one. The backpack was still in the guesthouse and we took a daypack with valuables with us. Good faith then? You might already guess.

Afterwards it turned out that someone had been in our cabin. I placed a number of items strategically before leaving and those were not in the same place as before. Sure enough, I lost some money. When we asked our neighbors (who were also on the tour), it turned out that money had also been stolen from them. A “small” amount of a few thousand Baht. So the thief didn’t want to make it stand out.

Meanwhile, other travelers, the guides and the staff were aware of the theft. Maybe more had been stolen, but of course not everyone knew how much money they had with them. Well, how do you find out who the thief is? You will not, but we had a suspicion.

On the last day, a family missed some sunglasses, including their daughter’s. They asked the staff if anyone had seen the sunglasses, but no one knew about it. A grim atmosphere arose and suddenly the sunglasses appeared from behind the reception. The parents confronted the staff and a great altercation ensued. Because this loss in combination with the theft is of course very suspicious and left a very sour taste.

YES! It’s incredibly beautiful and different from what you have probably ever seen. I didn’t have the best experience, but that can happen. I was quite unlucky.

Book a ho(s)tel in the town of Khao Sok and arrange your tour to the national park on the spot.

I probably didn’t have the best tour company either (whose name I don’t remember). Organizations that are recommended are Smiley Lake Tours and Morning Mist. Cost for a 1 night tour (in a cabin on the water) and 2 days is around 2500 Baht per person.

How to get to Khao Sok National Park

The Khao Sok National park is easily accessible by bus from Krabi. This bus ride takes about 3 to 4 hours. On the way I had to change buses. You can often easily arrange a spot on the bus through your hostel in Krabi.

After the Khao Sok National Park I traveled to the Surin Islands, the most beautiful islands of Thailand. Highly recommended!