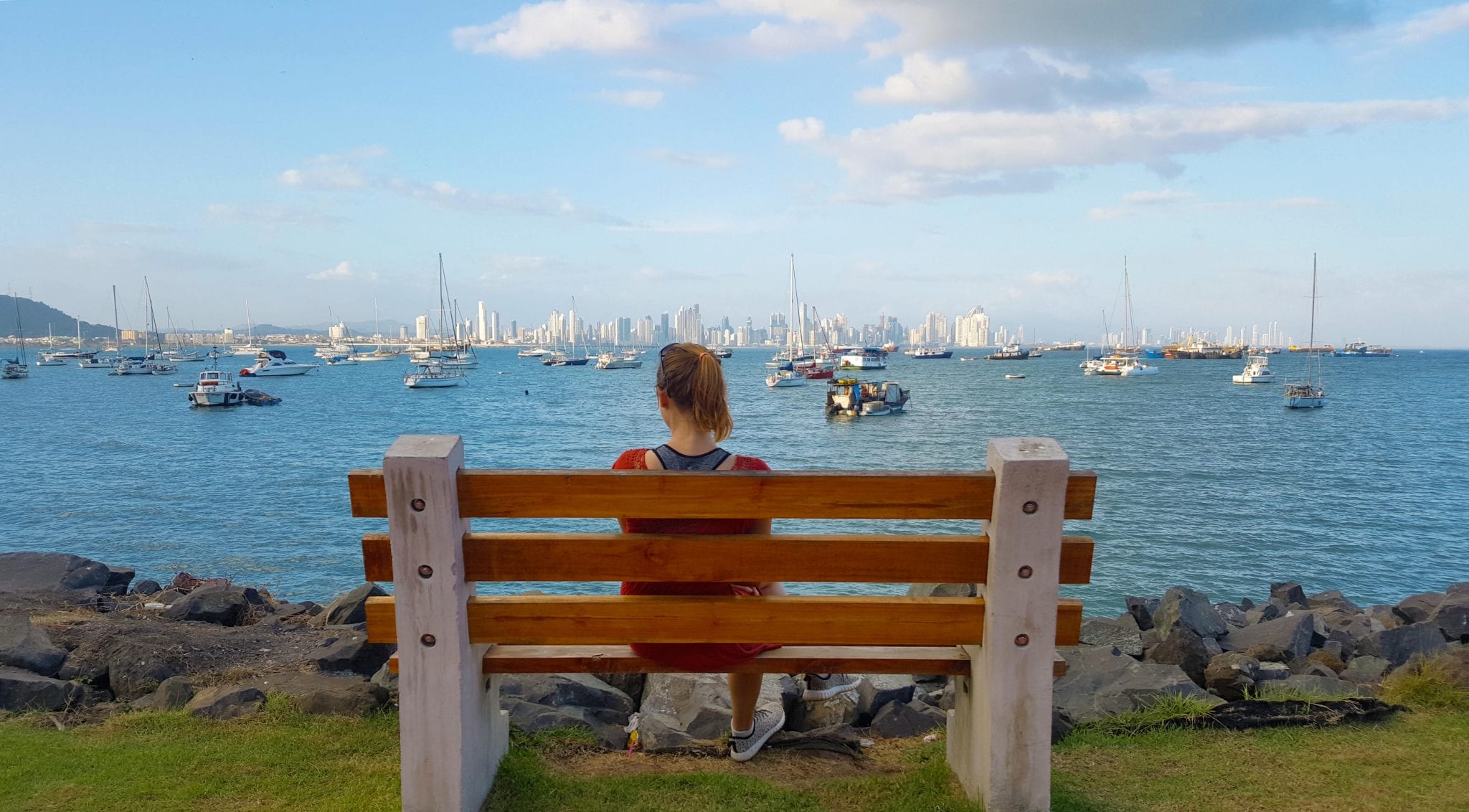 Panama City is a large, diverse and in some places chaotic city. The city has the famous Panama Canal, many skyscrapers, but also national parks, such as the Metropolitan National Park and the large Soberania National Park. I recommend spending about two to four days for this city. You can read the most useful travel tips for Panama City below!

In general, Panama City is a safe city. You just need to know which neighborhoods are best to avoid. The city has many good, but also a number of bad neighborhoods. Casco Viejo is a safe neighborhood both during the day and at night. There’s a lot of police around here. It has happened to us once that we were offered drugs on the street. If you don’t go into this there is of course no problem.

Avenida Central runs from Casco Viejo in a bad neighborhood that you should definitely not come as a tourist. It is also better to avoid the adjacent neighborhood of El Chorrillo. When visiting Panama Viejo, the historic part, be careful of your belongings and avoid this neighborhood in the evening. Furthermore, avoid the neighborhoods of Curundú and San Miguelito. Check the Panama travel advice from the national government before you leave.

Panama City is quite expensive. This is mainly due to the good economy. The prices are comparable with the Netherlands and sometimes even higher, but sometimes lower if you know where to go.

In the city you’ll find many mini supermarkets where you can buy the basic foods. Unfortunately, those shops are generally quite pricey.

Do you want to buy cheap food, but also useful items such as towels, toothbrushes or clothing? Then visit the mega large El Machetazo supermarkets. Here you can buy just about everything and for a very affordable price! The only downside for me was having to queue for the checkout for 20 minutes (yes, really). It could well be that this has to do with Christmas. At this supermarket I bought a lot of food, some new towels, hats and some clothes. Because Panama City is generally expensive, these kind of supermarkets are quite nice!

A resident recommended the many traditional Fondas for budget food. These are a kind of outdoor restaurants where you can indicate what you want in the display case. You can then eat at the adjacent bar with chairs. Most locals eat at such fondas because they are often very cheap and the food is totally fine.

Since I stayed in the Casco Viejo district the longest, I can write the most about the restaurants in this district. Don’t expect many cheap restaurants in Casco Viejo, as most of them are geared towards tourists.

At Café Coca Cola you have the best Panamanian dining experience among the locals. Here you can order typical Panamanian food with of course a bottle of Coca Cola. The dishes are definitely not expensive and the portions are quite large. You will also eat in the oldest café in Panama City and the only café in the world with this name.

Taxis are pretty much the primary form of transportation in Panama City. Many residents choose not to drive themselves in the super chaotic traffic. The taxi drivers in particular drive very aggressively. I really advise you not to rent a car if you visit the capital.

The most common taxis in Panama are the yellow taxis. These do not have a meter and often do not meet the safety conditions. For example, I once had a taxi without a rear window and a taxi halfway without petrol. No seat belts too of course.

Many taxis honk a few times to let you know they are free. Because I look completely like a super tourist with my blonde hair, I heard a taxi honking every minute.

Always agree with the price in advance, or choose the meter-taxis. Taxis often demand much more than it should cost. A ride from Casco Viejo to Metropolitano Park shouldn’t cost more than $4. Still, I had a taxi driver who asked $10 for this. A ride between the large Albrook bus station and Casco Viejo should in principle not cost more than $4. Don’t be afraid to ask less. If they don’t accept your price, just take the next taxi. There are more than enough!

Transfers to and from Panama City Airport

If you visit Panama by plane, chances are high that you’ll fly to Panama City. Tocumen Airport is located about 15 kilometers from the city center. The city center is best reached by taxi from the airport. There is no possibility to buy tickets for public transport at the airport. The taxi will cost you about $30. Taxis also charge $30 from the center to the airport and are unlikely to lower their price.

A good alternative is an Uber taxi. I paid about $11 from the center to the airport. An Uber from the airport to the city is a bit more difficult, because a meeting point may be difficult to determine at an airport that you do not know well.

Sights and Activities in Panama City

There are plenty of fun activities and attractions in Panama City, including multiple national parks near the city and more! Take a look at my personal Top 5 sights in Panama City.

Where to stay in Panama City?

Panama City is a large city and therefore has many different accommodations.

As I mentioned earlier among the travel tips for Panama City, I recommend avoiding the neighborhoods of El Chorrillo, Curundú and San Miguelito.

There’s not much to do in the part of Panama City where the skyscrapers are located. I stayed there 1 night before my return flight at hostel Siriri, a great place for one or two nights. Close by was the Hard Rock hotel with an adjacent large shopping center where I enjoyed myself for a few hours. The Hard Rock Hotel has a rooftop bar on the 62nd floor. The bar opens at 8:00 PM and charges an entrance fee.

I’ve been in several places in the city, but the longest in the Casco Viejo district, a very nice neighborhood! Here I had quite a bit of trouble finding an ATM. After some inquiries I was referred to Hotel Tantalo. Inside is an ATM that everyone can use. Always useful to know.