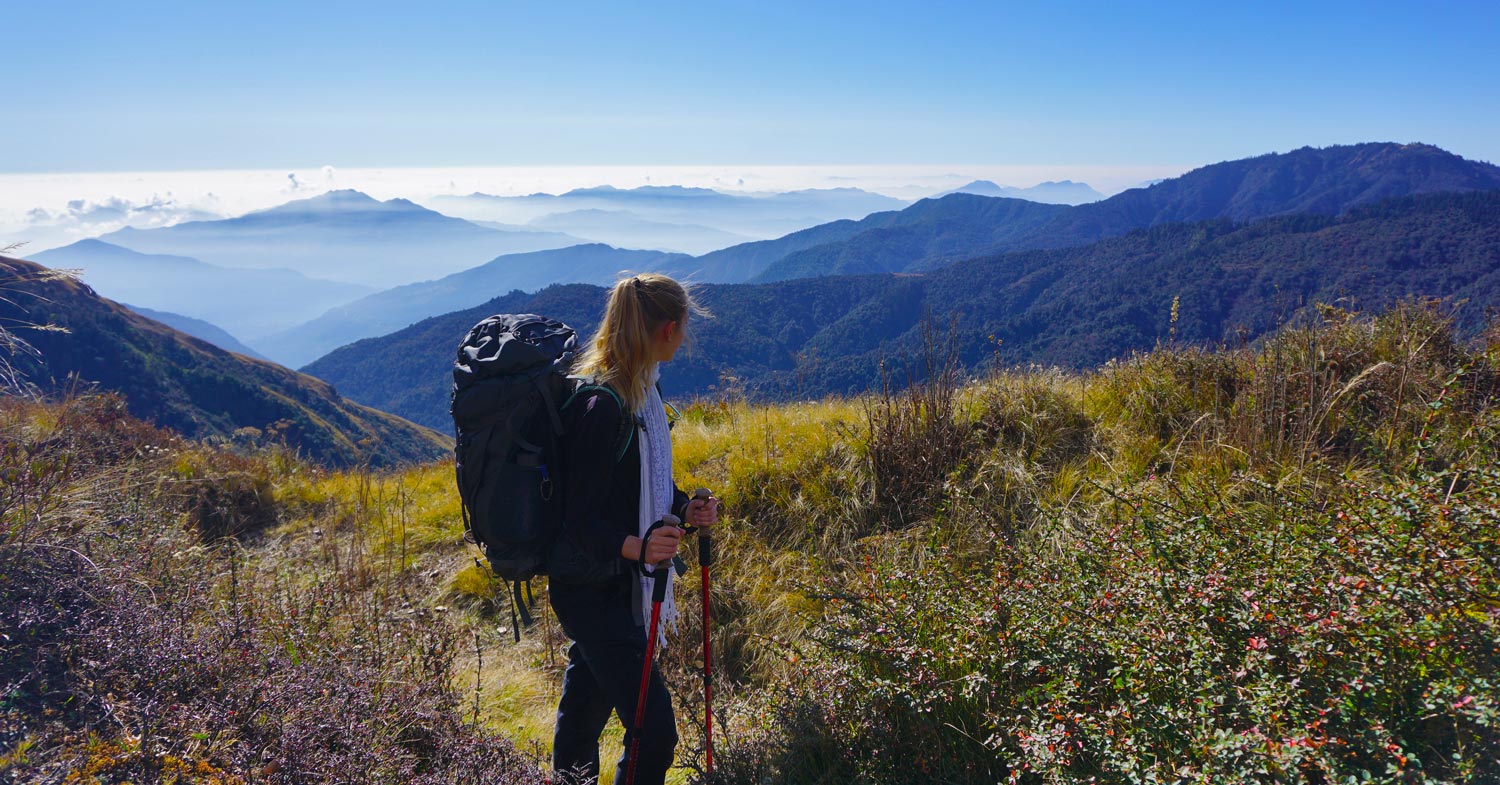 Before I started my indefinite journey (which eventually ended after 8 months in the Philippines during the corona outbreak), I was already planning a trip to Nepal. I heard such good stories about it and it’s a completely different destination than most tropical countries in Southeast Asia. Nepal is a very interesting and beautiful country that’s rich in culture and nature. Backpacking through Nepal is highly recommended and with this Nepal itinerary you’ll see all the highlights!

Nepal is mainly known for the Himalayas. In the country there are even 8 of the 10 highest mountains in the world. Of these, the Mount Everest is the highest in the world with its elevation of 8848 meters.

Your journey will most likely start in Kathmandu, the capital of Nepal. This city is already at an altitude of about 1350 meters.

Even after traveling through Asia for over half a year, my visit to Kathmandu resulted in a culture shock. I have mixed feelings about the city. It’s very busy and dirty, but also rich in culture. It certainly is an interesting city!

Read all about the things to do in Kathmandu + useful tips here.

Pokhara is the starting point for various treks through the Annapurna Mountains. This makes it one of the most popular tourist destinations in Nepal.

Not an experienced hiker? No problem! You can make easy or very intensive treks from Pokhara.

One of the most popular treks is the tough 10-day Annapurna Sanctuary trek. But the 5-day Mardi Himal Trek should also be incredibly beautiful and a bit easier.

The Poon Hill trek is one of the best treks for inexperienced hikers, just like me. In addition, this trek can be done without a guide. For me it was an experience to remember!

How to get there: From Kathmandu it’s about 8 hours by bus to Pokhara. Dozens of buses leave around 7:00 in the morning which can easily be booked at your ho(s)tel. I paid 1000 Rs.

The tiny town of Bandipur is not often included in a Nepal itinerary. A pity, because it’s really recommended! This small charming town is located in central Nepal at an altitude of 1030 meters.

When you walk around, you probably won’t think that you’re in Nepal, but rather in a southern European country. The architecture of the houses comes from the Newari people.

I found it to have a very pleasant atmosphere, partly thanks to the absence of motorized transport. There are a number of restaurants and cafes with a view of the street.

An absolute must is to visit the Thani Mai temple which is located on the hill. The temple itself is not that special, but the view is. From this hill I’ve had the best view of the Himalayas in all of Nepal.

How to get there: From Pokhara you first travel to Dumre by bus, a journey of about 3 hours. Then you can take a jeep, taxi or local bus for 50 Rs to Bandipur. This is about half an hour’s drive on a winding road.

It’s THE place to spot rhinos. No guarantee of course, but the chance is very high. When I was there, there was even a semi-wild rhino walking down the street which I was able to touch after some strolling around!

You can read all about my visit and spotting rhinos in the Chitwan National Park here.

How to get there: From Bandipur you first travel to Bharatpur by bus for 400 Rs. Then you can take a tuk tuk or taxi to Sauraha (negotiating is recommended!). A cheaper option instead of the taxi is to take a bus from Bharatpur for 100 Rs to Ratnanagar and then a tuk tuk for no more than 200 Rs. From Pokhara there’s also a bus that takes about 8 hours.

Finally, you’ll travel back to Kathmandu. The bus from Bandipur to Kathmandu takes approximately 8 hours.

TIP: In Nepal there are 2 major providers, namely NTC and NCell. The difference between the two is that NTC has the best coverage mainly in Kathmandu and NCell has reasonable to good coverage everywhere in the country.

Traveling from A to B in Nepal is fairly easy by bus. Don’t expect a luxury touring bus, but an old bus with some wheels that does the trick. Says enough right? Road safety in Nepal is quite dubious.

Sometimes when traveling you have to turn your mind to zero and just go for it. That was the case for me in Nepal, especially in Kathmandu. The city center is characterized by motorcycles and ancient cars that race through small streets and don’t give way to pedestrians. Sometimes I had to jump away or I got hit by a car mirror.

In addition, the infrastructure in the country is not great. The largest roads connecting the cities across the country are actually always single carriageways. In the event of an accident, you’ll probably be stuck in traffic for hours and in the worst case a whole day. The roads aren’t exactly of good quality either.

Besides the buses, there are jeeps and tuk-tuks for short distances. Bargaining is always advisable for this. Taking a taxi for short or long distances is also possible, but this is the most expensive option.

Nepal is a very poor country. In fact, it’s one of the poorest countries in Asia. Traveling in Nepal is therefore generally very cheap. In Nepal people pay with the Nepalese Rupee (Rs).

Accommodation costs between €10 – €20 for a neat private room. A bed in a dorm is even cheaper.

The food is also super cheap, especially the local cuisine. A substantial meal costs around €2 – €5. You pay considerably more for Western food than for local dishes.

Transport by bus is dirt cheap. For example, you only pay about €7 for an 8-hour ride.

The most expensive activities are generally the treks. You always need a Permit for this and if you take a guide, this is also a nice bite out of your budget. In addition, it’s necessary to buy/rent warm clothes and sleeping gear if you do not already have them.

I traveled around Nepal for 20 days and spent an average of around €30 per day. This includes accommodation, transport, food/drinks and all the necessities for a three-day trek without a guide.

For Nepal a visa is required for most nationalities to be able to enter the country. There are several options to choose from, namely a visa for 15 days, 30 days or 90 days. In addition, there are three options to get this visa.

Nepal has no less than 5 seasons, namely spring, summer, monsoon, autumn and winter.

In the months of June – August it’s summer in the mountains with pleasant temperatures, even at altitudes of over 4000 meters. But in the subtropical southern part of Nepal at that time it’s monsoon season with a lot of rain and high temperatures of 25 °C to 40 °C.

In the winter months, the cold air is partly blocked by the Himalayas, so it’s still quite warm in the south. On the other hand, it’s (extremely) cold at medium to high altitudes.

The best time to travel Nepal is roughly from October to April. The best months for trekking are March – April and October – November. In the winter months it’s certainly too cold and dangerous at high altitudes due to the many snowfalls and blizzards. So plan your Nepal itinerary wisely.