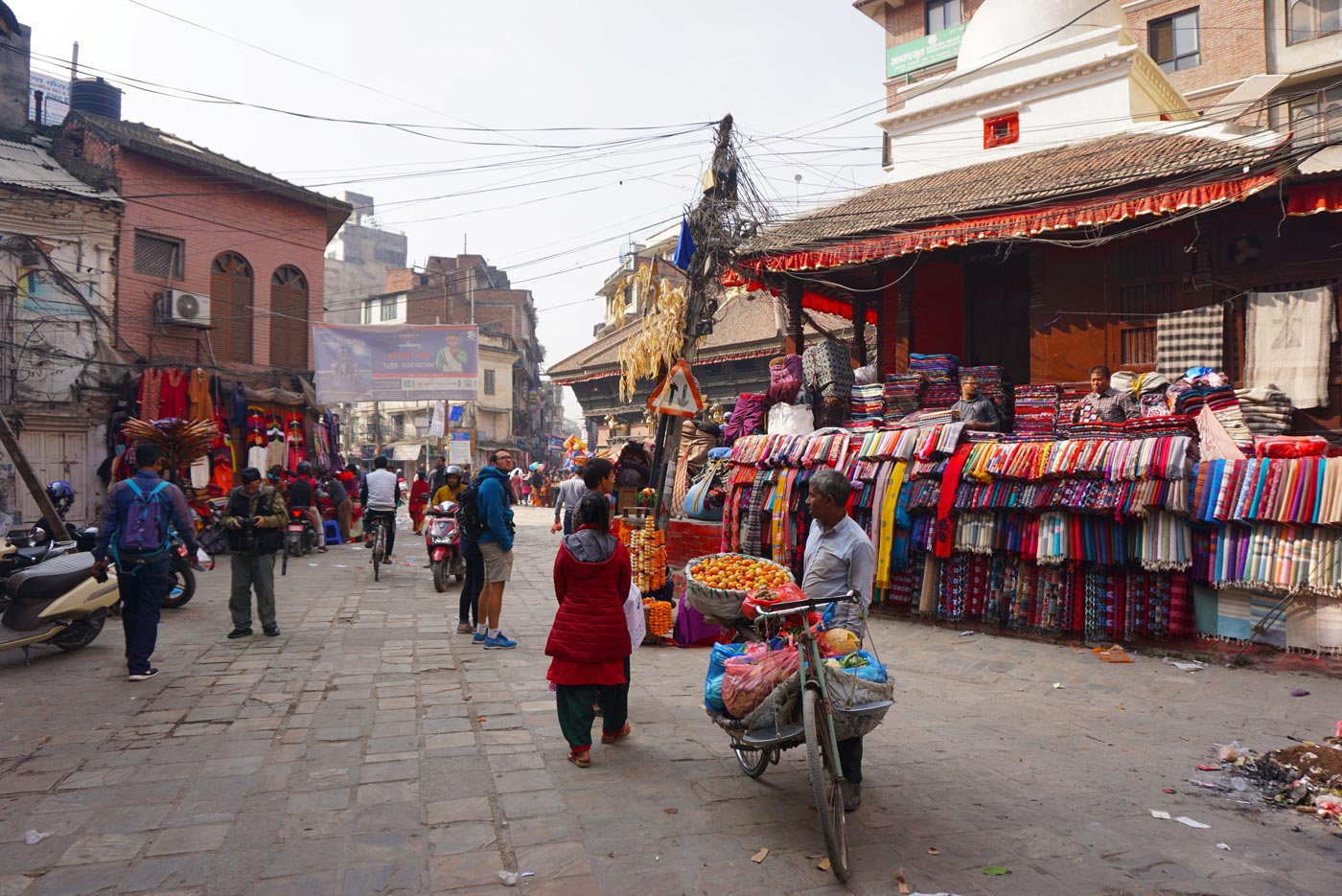 Kathmandu, Nepal – 10 things see and do

After my backpacking trip through Myanmar, a new adventure awaited me in Nepal. This adventure started in the capital city Kathmandu. Kathmandu is located at an altitude of no less than 1350 meters, south of the Himalayas. The first time I had a view on this mountain range was from the airplane. Not long after, this fairytale view turned into a gray mass of buildings and a thick layer of smog. I was in for a real culture shock as soon as I got off the plane.

In general I found the city very dirty and the traffic chaos was striking. By now I was used to traveling through Asia and so were unsafe traffic situations, but Kathmandu was a fraction worse. Motorcycles and old cars race through small streets and do not easily give way to pedestrians. It has happened a few times that I had to jump aside or was hit by a car mirror. So be warned!

Kathmandu is generally not a place to relax. On the contrary. The combination of all the sounds, smells and traffic chaos can cause an overload of stimuli for many, especially if you’re not yet used to traveling in Asia. Does this mean that I discourage traveling to Kathmandu? No definitely not! It’s a very special place that’s rich in culture, but can be a bit too intense for some novice travelers.

Read more about my complete Nepal itinerary for 2 – 3 weeks.

10 things to do in Kathmandu

There’s plenty to see and do in Kathmandu. The city is known for the 17th century Buddhist and Hindu temples and palaces. It’s also the place to book and start various hikes and treks through the Himalayas.

In the middle of the city, bordering Thamel, is the Garden of dreams. Within the garden walls you’ll find rest from the busy and smelly city. The garden, build in 1920, was particularly modern for its time. There are pavilions, fountains and European-inspired structures. There’s also a restaurant where you can have lunch or just a drink.

One of the best known and most popular sights in Kathmandu is the Swayambhunath Stupa, also known as the Monkey Temple. The temple is located on a hill in the west of Kathmandu.

The temple gets its nickname from the many monkeys that inhabit the grounds. Be aware about this fact, because the monkeys know exactly where to find you if you carry food and drinks or something made out of plastic. So make sure that everything is safely stored in your bag, then there’s no problem.

Entrance fees to the Monkey Temple are 200 Rs.

One of the most special sights in Kathmandu is the Pashupatinath temple. The temple itself is not very special, but what’s going on there is. The Pashupatinath is known for the public cremations that take place there. There are just few places in the world where this happens as openly as it does here. The place is accessible to everyone and the bodies are cremated in front of hundreds of people.

I thought it was an incredibly special experience. I stayed there for over an hour and witnessed several cremations. The social hierarchy was also visible. The cremation sites looked different and the attendance varied enormously. Afterwards, the ashes were flushed into the sacred (and very polluted) river. Another special scene was that someone decided to wash himself in this river.

The Boudhanath Temple is located in the west of the city in the Bouddah district. It’s one of the largest ancient stupas in South Asia. The temple has even been on the UNESCO World Heritage List since 1979, as part of the Kathmandu Valley.

The Tibetan Buddhist Kopan Monastery is located outside the center of Kathmandu on a hill. The monastery is known for the Western tourists who come here to learn more about Buddhism.

Various courses are given in the monastery and it’s possible to stay overnight. Special experience guaranteed! For more information, visit the Kopan Monastery website.

Kopan Monastery is an hour’s walk from Bouddha district. It’s also possible to get there by bus, but apparently this takes longer. Finally, you can also take a taxi for about 500-700 Rs.

The best way to visit most of the sights in Kathmandu is by doing a city walk with a local. I did a city walk with Mr. Shiva from Himkala Adventure. We visited several temples, Durbar Square and the Monkey Temple and he could tell us a lot along the way. The damage from the 2015 earthquake was also clearly visible in many places, because not everyone had enough money to restore their home.

I thought it was one of the nicest ways to get to know the city. And the tour is also completely free! Of course a donation will be appreciated.

Not only Kathmandu has a Durbar square, there’s also one in Patan. Unlike the one in Kathmandu, the square in Patan suffered little damage from the earthquake. You can admire a number of beautiful palaces which are in very good condition.

There are daily buses to Patan, but the taxi is a faster but also more expensive option.

Also in Bhaktapur there’s a Durbar square. This city is located about 13 kilometers from Kathmandu. Ttogether with Kathmandu and Patan, it’s the third ancient royal city of Nepal which is located in the Kathmandu Valley.

Bhaktapur is quite easy accessible by bus, which takes about an hour. In addition, taking a taxi is also a good option, but the most expensive.

From Kathmandu you can easily travel further to other destinations in Nepal. Choose from a long-distance buses, taxi or maybe even a domestic flight.

To Pokhara: This bus ride takes about 8 hours and costs 1000 Rs. There are several bus companies with a few departure times per day. I left at 7:00 am and arrived in Pokhara at 3:00 pm. Next you can choose to walk or take a taxi (no more than a few 100 Rs to the center of Pokhara.