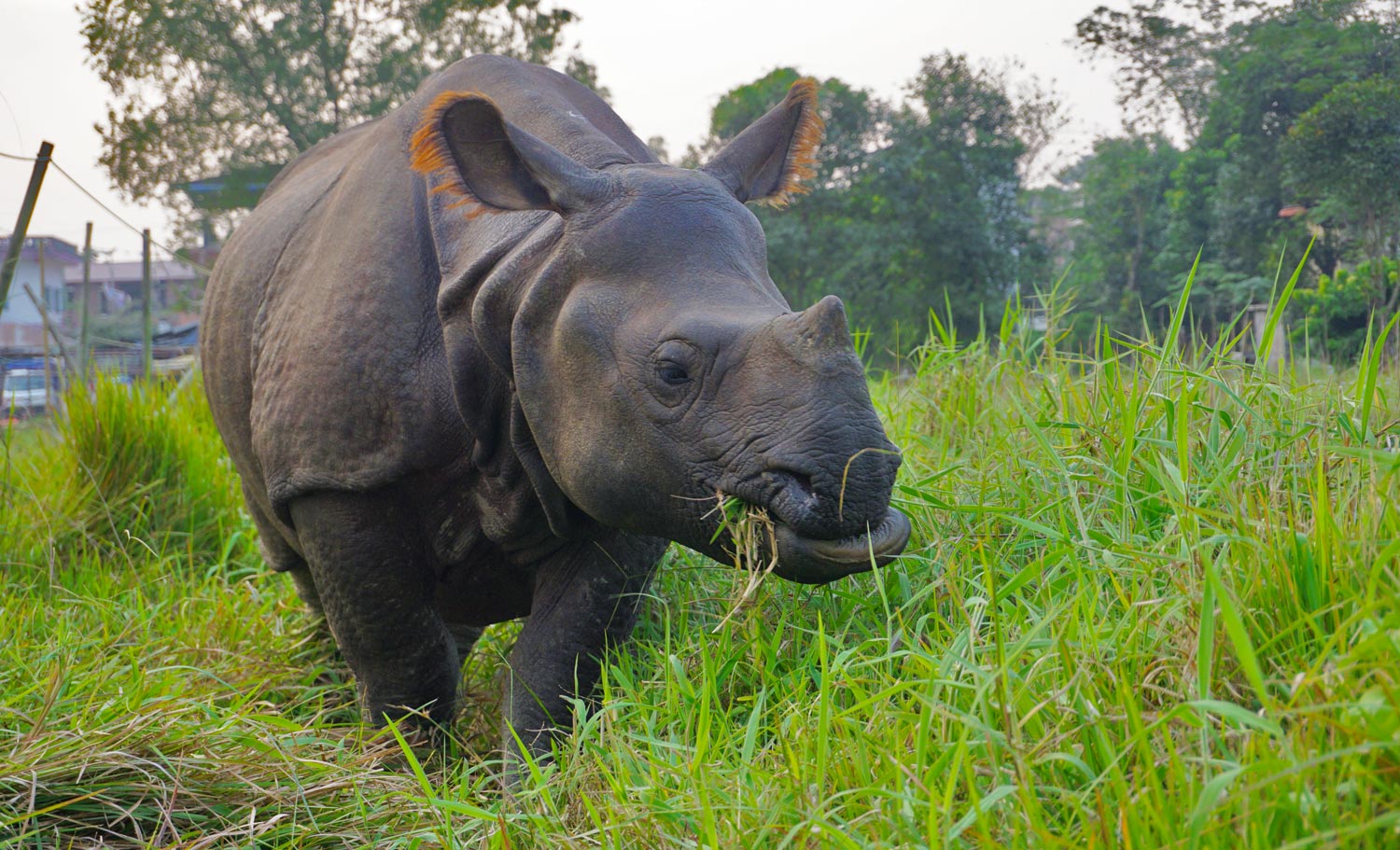 Nepal is a Valhalla for hiking enthusiasts and seasoned trekking specialists. The country is home to no less than 8 of the 14 mountains in the world with a height above 8000 meters, including the famous Mount Everest. For example, I did the fantastic Poon Hill Trekking from Pokhara. But hiking in the mountains is not the only thing you can do there. In addition to giant mountains, Nepal also contains of lowlands and jungle. The oldest national park of Nepal is Chitwan National Park. This national park with an area of no less than 932 km² was established in 1973 and included on the UNESCO World Heritage List.

What makes Chitwan National Park so special and definitely worth visiting is its enormous biodiversity and the fact that it houses the second largest population of Indian rhinos in the world. If you want to see these fantastic animals in the wild, you certainly have a chance in the Chitwan National Park!

If you visit Chitwan National Park, you will stay in the village of Sauraha. Besides that this village is the gateway to the national park, there is little to do. However?

The day before the tour started, I decided to take a little walk down to the river to spot crocodiles. Once on the road I saw something completely different walking down the street, namely a rhinoceros! What, a rhinoceros down the street ?! Yes, this semi-wild rhinoceros is not shy of people and sometimes likes to walk down the street looking for some snacks, like fresh grass. Everyone was obviously impressed by this giant. Before the rhino knew it, he had dozens of fans who walked along with him.

I was a bit scared at first, but it soon turned out that this rhinoceros was a calm, benign giant. Passing people, scooters and cars did very little to him. He even used one of the cars to rest his head on.

At one point he walked very far from the national park, so an older woman intervened. Let me say that I’ve never seen an elderly woman beat a rhinoceros with a bamboo stick. But her tactics worked, and the rhinoceros walked to a lawn where the fresh white laundry was hanging to dry. Most people left and before I knew it, I was face to face with this impressive rhino with just a few other people. While he was quietly eating grass, I even managed to touch this amazing animal, fantastic!

Spotting a rhinoceros in the village is quite rare. The best way to also come face to face with these animals is by means of a one or multi-day safari. Safaris are often easy to book at your guesthouse in Sauhara. You can choose from a jeep or walking safari. A jeep safari is often not recommended because of the smaller chance of spotting animals. Such a noisy clumsy car is of course not very conducive to spotting animals.

I chose a full day walking safari where we covered about 15 km. The tour started with a canoe trip on the river where we mainly spotted many birds, including several kingfishers and wintering ducks. But crocodiles also like to show themselves in the morning sun.

While walking we saw several monkeys and birds, but the rhinoceroses were less easy to spot. There are also a large amount of Bengal tigers in the Chitwan National Park, but the chance of seeing them is very small. I have seen footprints of these animals in many places.

We also saw a few elephants, but the reason we saw them was a lot less cheerful. The rangers use the elephants for their work and outside working hours the animals are on chains. The guide said that one male elephant is still free with a pretty bad reputation. This aggressive elephant goes by the name of Ronaldo and is feared by all inhabitants of the nearby villages.

Just before sunset we finally saw a number of rhinoceroses by the river. These are a lot less tame than the one who walked down the street. Rhinos are very sensitive animals. Their smell and hearing are very good, but their sight is not. If you make them angry, they will rush towards you like a bulldozer. That is why they are the most dangerous animals in Chitwan National Park. More dangerous than the tigers, because those are more afraid of you than you of them.

In addition to these wild animals, other animal species also occur, including crocodiles and snakes. On the waterfront we saw a large crocodile sunbathing and a little further a thick python also enjoying the sun.

Price of a safari in Chitwan

A guide is required to enter Chitwan National Park. Tours are easy to book on site in Sauraha and therefore not needed to be booked in advance.

For a one day walking safari including 2 hour canoe trip I paid 4500 rs (€33). The park entrance fee was already included in this price.

If you visit Chitwan National Park, you will stay in the nearest village of Sauraha. There are enough accommodations in different price ranges. I stayed at Evergreen Ecolodge which is definitely recommended if you don’t need extreme luxury. All their huts and bungalows are eco and environmentally friendly. You can sleep in a nice tree house, but also in a bus transformed into a room.

How to get to Chitwan National Park

Fortunately, the national park is easily accessible from various places in Nepal. For example, there are regular buses from Kathmandu and Pokhara that take about 8 hours.

Before visiting the national park I was in Bandipur. This route was a bit more complicated. So I first took the local bus for 400 rs to Bharatpur. The information in Bharatpur was very limited and everyone tried to get me a tuk tuk ride but luckily someone was able to help me find a bus for 100 rs. But this bus also did not drive to Sauraha, but to Ratnanagar where I really had to believe a tuk tuk for 200 rs. So if you can take a tourist bus, it is best recommended for this route.