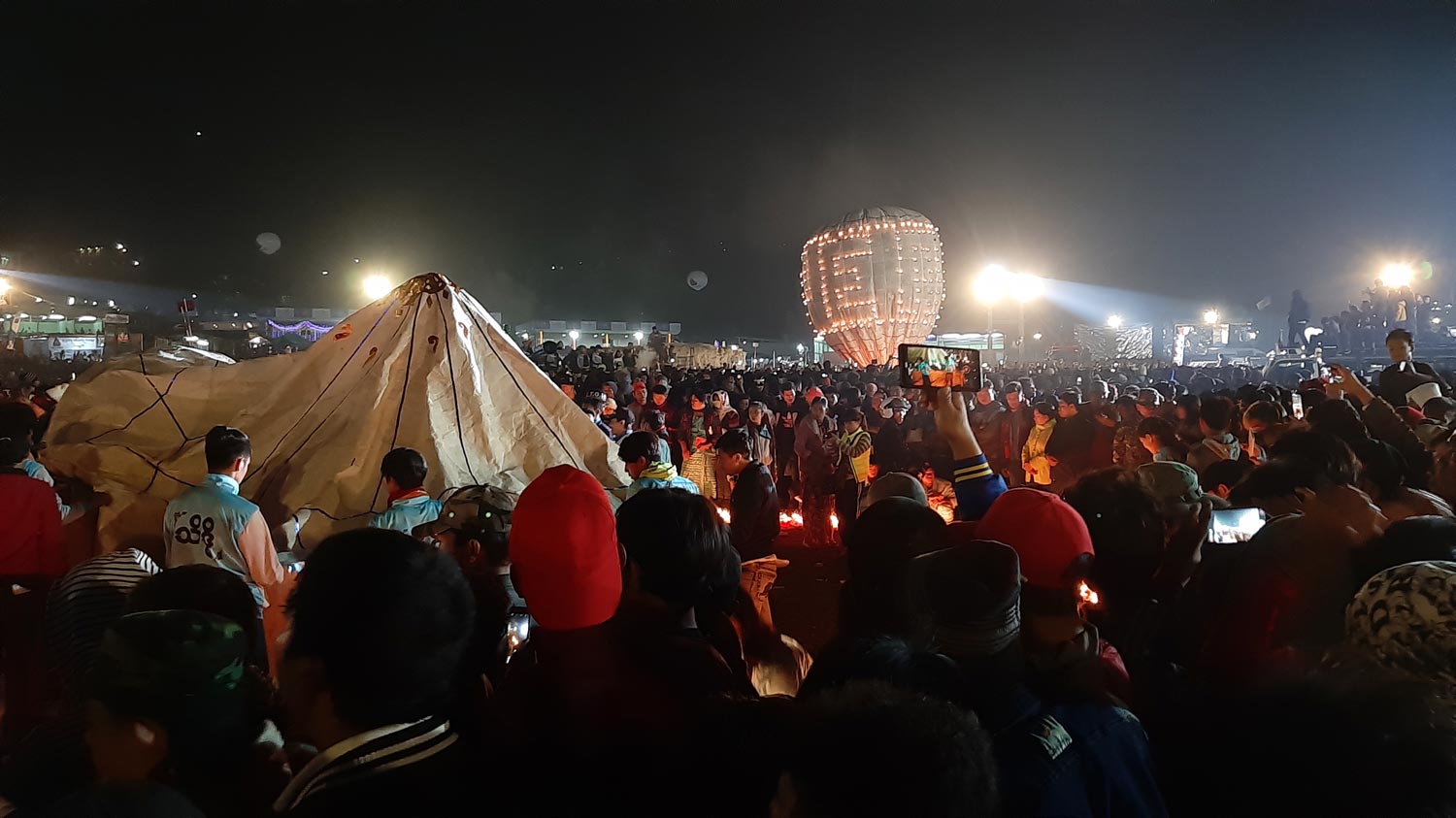 The Taunggyi Balloon Festival is celebrated every year in Myanmar in honor of the end of the rainy season. This usually takes place sometime in November and lasts several days. The festival is always celebrated in the town of Taunggyi which is located near the Inle Lake. In 2019 this took place in mid-November and I had the honor to be present during my 1 month trip through Myanmar. And gosh that was an experience!

Be sure to watch the video below to get a good impression of this bizarre festival.

Festivals in Myanmar can be quite special, from what I’ve experienced. The Taunggyi Balloon Festival also isn’t an ordinary festival with cozy balloons. During these festival days, hot air balloons are released into the air during the evening, which are attached with fireworks under the watchful eye of thousands of people.

Okay, that sounds nice, you might think. However, it’s super dangerous! The fireworks are already lit when the balloons just go up in the air and the arrows are also pointed downwards instead of upwards. Oh and the balloons are also equipped with burning candles. So you kinda guessed it, it’s one big chaos. But a cozy chaos with intoxicated locals. And to be honest it is a beautiful sight to watch the hot air balloons take off.

My experience with the festival

During my three-day trek from Kalaw to Inle I had met some nice travel companions with whom I would go to the festival. We hired a driver with pick up and left for Taunggyi in the afternoon from the town of Nyaung Schwe (Inle Lake). The driver would drive us back around midnight that same day.

When we walked through the main street with local shops, we already noticed the crowds. They weren’t used to tourists here and people watched us curiously. In the distance we already saw balloons in the shape of animals go into the air. After a few dozen of meters we were stuck in the crowd. Apparently it was too busy or the gate was still closed so we all had to walk another way.

Once arrived at the festival site, I was amazed at its size. The site was full of stalls, fairground rides and sound installations with various loud music. The public toilets were a drama, by the way. It turned out that everyone did their business in the middle of one of the fields behind the stalls. Gross!

After sunset it was time to release the first balloon. And that was just as special as I expected. When the hot air balloon was at a height of about 50 meters, the fireworks were already going off and everyone started cheering. It was quite interesting to see people laughing and running away from fireworks rushing towards them.

Each launched hot air balloon was a spectacle and very fun and exciting. One of the balloons landed in a tree due to the wind and another bumped into a building again. Fortunately most of them flew straight up.

As the evening progressed and everyone was a little more intoxicated, more and more locals approached us and wanted to have their picture taken with us. Family and friends were face-timed as they tried to chat with us and someone gave us their baby to pose with. Yeah, why not?

It was very special and a great experience, something I will never forget for sure. If you travel in Myanmar around November, be sure to keep an eye on the festival dates. The Taunggyi Balloon Festival takes place on this site. I can imagine there will be casualties every year, so I definitely recommend that you keep a safe distance!