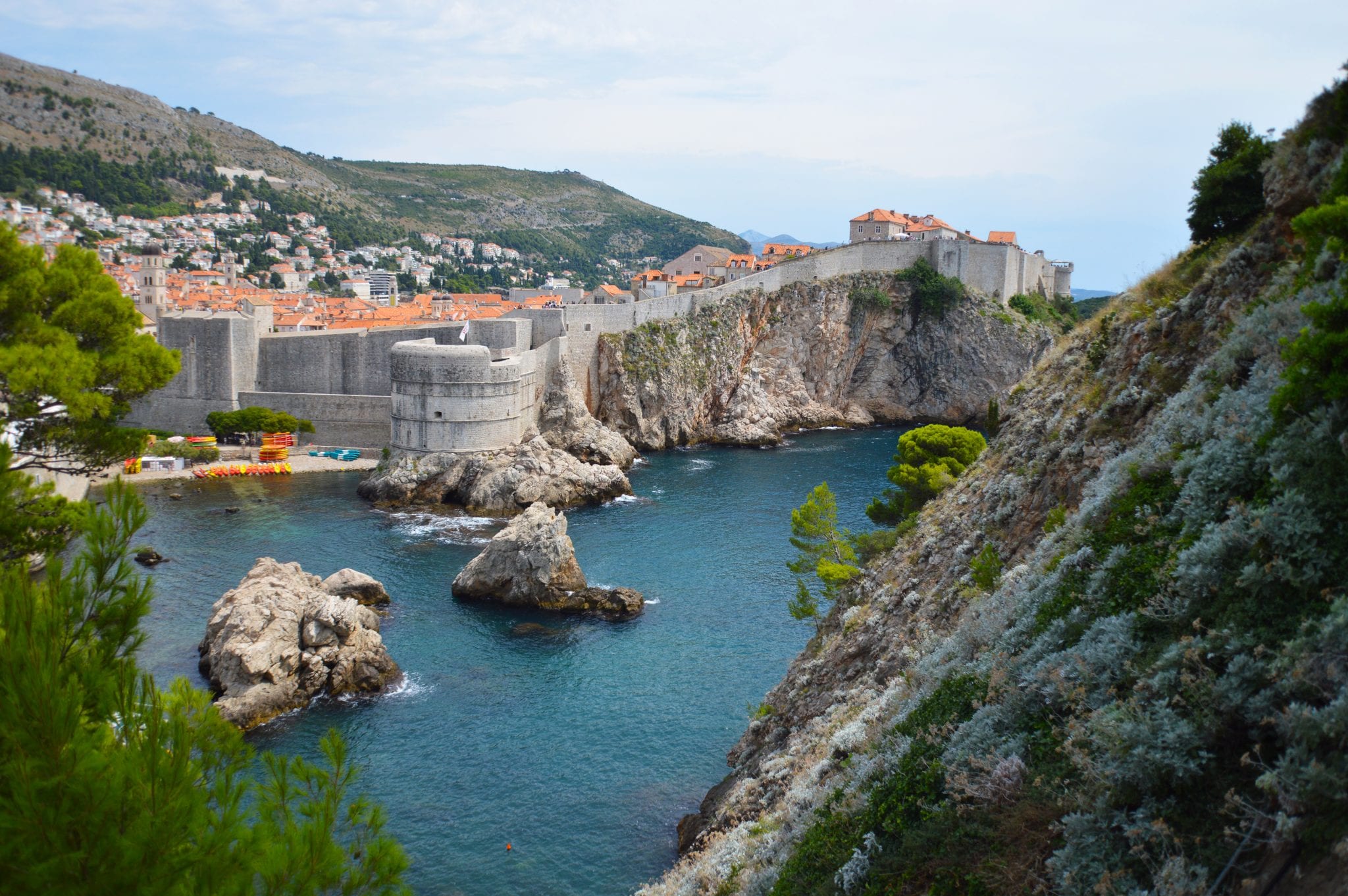 Dubrovnik, the city that’s named as one of the most beautiful cities on the Adriatic coast, where Game of Thrones is mostly recorded and where you see more tourists than locals in the city center. There are plenty of sights in Dubrovnik. In my previous article I already told about all the top sights in Split. Dubrovnik is the second destination during my trip in Croatia.

These cities are easy to combine. Because of the fun, varied sights in Dubrovnik, this city is still my favorite of the two.

Curious about the entire itinerary Croatia in 2 weeks?

The old city is completely surrounded by the old city walls that can be walked. Within the city walls are other well-known sights in Dubrovnik such as Stradun. Stradun is the main street that runs through the old town. The Onofrio fountain can be found in this street.

Opposite of the fountain is an smooth stone with a face on it, the Dubrovnik Maskeron. The trick is to stay standed on this stone. If you can also take your shirt off, you will be lucky the rest of the year. Few people manage to stand on this stone at all. Yet I managed to keep standing on this stone! I was wearing a dress, so I decided to skip this “happiness for a year”.

The Lovrijenac Fortress is located outside the city walls in Dubrovnik. It’s one of the attractions in Dubrovnik where Game of Thrones is recorded. Therefore they offer the opportunity to do a Game of Thrones Tour. From the fort you have a super cool view of the old city.

The Srđ mountain has an altitude of over 400 meters. You can go up the mountain by cable car. Walking is also an option, but we didn’t choose this option because it was very hot during the day. The path starts on the highway and then zigzags up.

A return ticket for the cable car was quite expensive, at 150 kuna per person (about € 20). You are up in 5 minutes but the view is fantastic! You can see almost all of Dubrovnik.

There is not much to explore at the top of the mountain. There is a restaurant, a museum and you have the opportunity to do a buggy tour. I haven’t done any of those things. I did go for a walk where I saw donkeys walking around and saw beautiful butterflies.

Babin Kuk is one of the greenest areas in Dubrovnik and is located in the north-west of the city. This section is a lot less touristy and the restaurants and cafes are also a lot cheaper.

I walked along the water on the east side. There are many small wooden piers where the locals have their boats. A very nice route, with a fair amount of shade. From this route you have a good view of the Franjo Tudjman Bridge, the bridge that connects Dubrovnik with other cities. In the evening it’s very nice to watch the sunset from the beaches on the north side.

On the other side of Dubrovnik is the abandoned Belvedere hotel. This former 5-star hotel has been completely deserted for years, except for a few cats. How cool is that?! For me this was one of the most special sights in Dubrovnik. A must do!

The Lokrum island is about a fifteen minute boat ride from the old town of Dubrovnik. Tickets are available in the harbor at a wooden desk. The boats regularly go back and forth. The last boat leaves the island at 8:00 PM. So make sure you don’t miss it!

You can take a nice walk on the island. In many places we saw signs saying that open fire and smoking are strictly prohibited due to the extreme drought. That’s why there were many fire hoses and there are 2 water reservoirs for quickly extinguishing fires.

On the island there’s a lot of shade from the trees and there are plenty of swimming spots. There is a “Dead Sea”, a rocky beach with reasonably high cliffs and even a nudist beach. Bring water shoes if you plan to swim. The rocky beach where I swam consisted of a kind of large stone plateau.

The fortress is located at the highest point on the island. It’s a tough walk because of the steep paths with loose stones and little shade, but you get a nice view in return. There are many peacocks and bunnies on the island and they are not shy of people.

I entertained myself for one entire day.

The most famous and also the most commercial beach is Banje Beach. I’ve not visited this beach because it was always very crowded there. You’ll find other small rocky beaches along this coast where you can easily get in and out of the water by means of stairs.

Copacabana Beach is located in Babin Kuk, a short walk from the old town. It’s a sandy beach and also the largest beach in Dubrovnik. This beach is suitable for families and child-friendly because it’s not deep. Opportunities are provided to rent beach chairs and beach umbrellas.

It all seemed a bit too commercial to me, but it is a lovely beach to view a beautiful sunset.

The beach that I mainly visited was Buza Beach. This rocky beach is hidden behind the southernmost city walls. As soon as you walk through the alley you’ll see a sign “cold drinks” and an open gate. Leave the cafe to the left for what it is (prices are very high of course) and walk further down. There you end up at the rocky beach.

Many people do cliff diving here (at their own risk!) and I have often held my breath when I saw someone jumping.

There are a lot of stray cats in Dubrovnik. These are often fed by the locals or by the tourists. On the street I’ve seen many people walking around with dogs. I noticed that they did not always know how to best take care of the critters. Many dogs were overweight or they walked loose on busy streets. Hopefully this gets better over the years!

How to reach Dubrovnik?

Dubrovnik is easily accessible by bus from Split. Split to Dubrovnik takes about 4 to 5 hours. Busses sometimes do not leave on time and this can cause a lot of delay on the way.

Tip: Try to get a place on the right side of the bus from Split to Dubrovnik. Especially during the last part of the bus trip you have a beautiful view on the coastline.

Cafés and restaurants in Dubrovnik

For the best restaurants and cafes, I found myself often outside the busy city walls. The prices outside the walls are considerably lower. This does not mean that there are no good restaurants within the city walls though.