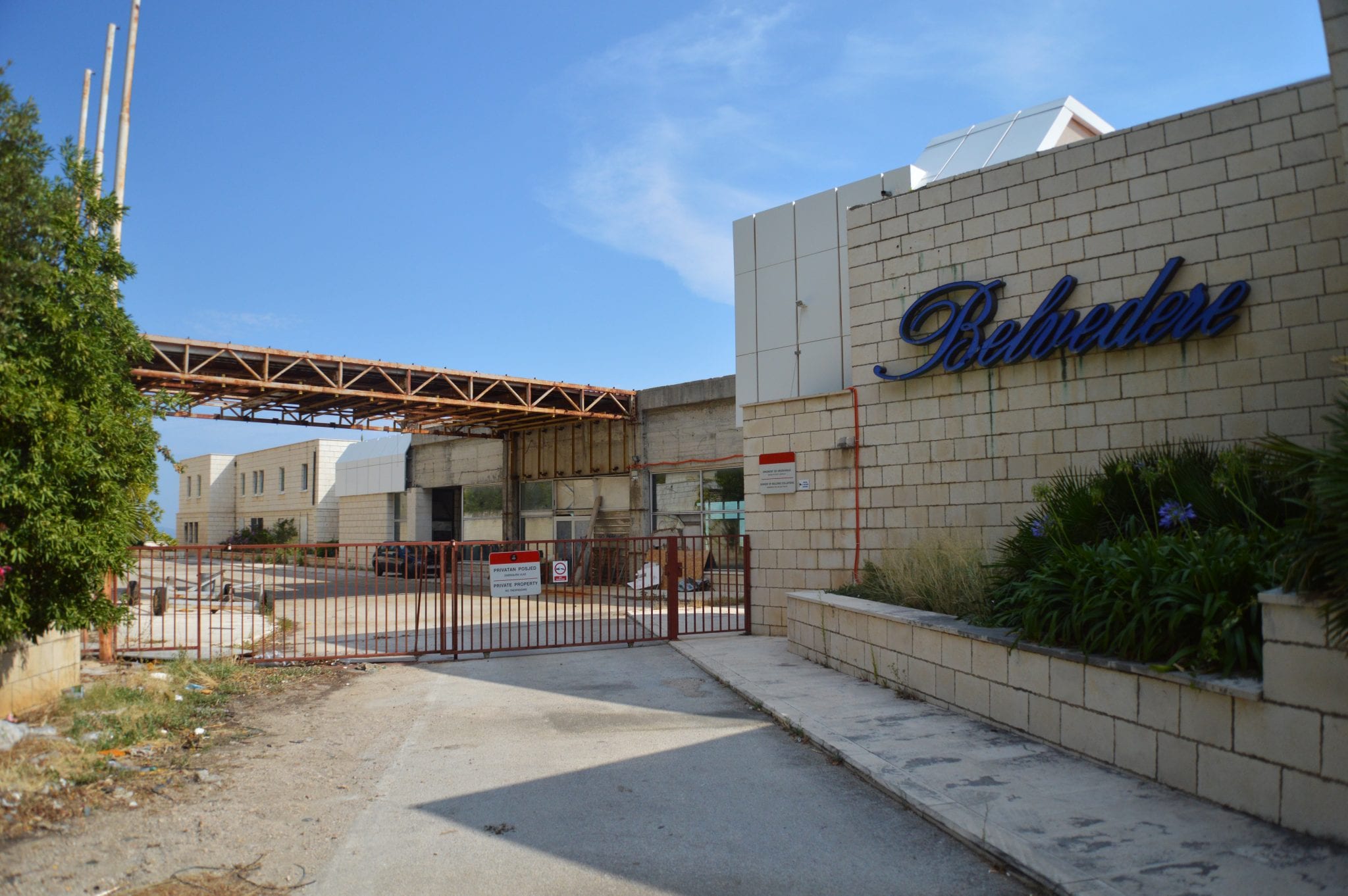 In the south-east of Dubrovnik in Croatia, half an hour walk from the old center, lies the abandoned Belvedere hotel. This is without a doubt a must-visit!

In 1985 the 5-star Belvedere Hotel opened his doors in Dubrovnik. But in 1991 it had to close following the Croatian war of independence that lasted from 1991 to 1995. The hotel then served as a refugee shelter for a short time. October 1, the siege of Dubrovnik began and in that year the hotel was destroyed beyond repair. Hotel Belvedere has since been abandoned.

In 2014, the hotel was bought by Russian millionaire Viktor Vekselberg, who’s also known as the owner of the largest collection of Fabergé eggs. Since then, several fences have been placed around the abandoned hotel, but it’s still empty.

Entering the abandoned hotel in Dubrovnik

The entrance is closed with large rusty gates and the hotel is shielded with green mesh all around. Behind the gates are a few parked cars. Maybe the hotel is not completely abandoned after all?

At several places there are large signs with: “Danger of building collapsing – Dangerous for life and health”. When we look at a window, shielded with metal bars, I see cardboard boxes with wine glasses and other things on the floor.

It looks like I can enter one of the lower roofs via a staircase that surrounds the abandoned hotel. The roof is covered with broken glass, pieces of wood, loose wires and pieces of stone, so I have to watch carefully where I walk.

The beautiful sea view provides a feeling of peace and gives the opportunity to imagine what a beautiful and luxurious hotel this must have been.

Then I see another large balcony from the balcony below. Here are two football goals where the children are playing. Loud techno music comes from a ground floor space. The locals make this place their own relaxing place. This now vibrant balcony features the infamous Game of Thrones fighting scene between The Mountain and Oberyn. Now the floor is covered with a large painting.

Deeper in the deserted hotel are dark rooms where the rubbish is scattered on the ground. The wallpaper molds from the wall due to the moisture. Broken walls demarcate the spaces. A broken toilet bowl is the only object that allows me to recognize the bathroom. Doors are on the floor and almost nothing is left of the windows. The corridors I look into seem endless and are getting darker.

The wind is blowing harder this day and the sky is turning gray. It howls through the hotel and creates an unpleasant feeling. The loose hanging wallpaper moves with it. In my opinion, this moment would be perfect for a good horror scene.

Next I arrive at a large stairwell. Upstairs are even more dark corridors and rooms.

It feels relatively safe to walk in places where graffiti is on the walls. Because of this I know that people have walked here before. The higher I get into the hotel, the less graffiti I see. Then I see corridors without any graffiti and many loose cables. This gives an unsafe feeling and I decide to walk back down. The building is already more than 25 vacant and hardly anyone looks at it.

The lift can be seen from the outside, which is attached to the top floor, with the rusted lift door hanging loose in the opening on the second floor.

After a while exploring the abandoned hotel I find a resident outside. It’s a cat that follows me for a while while I look around. The animal seems to have a great time here and has the entire hotel to itself. So the hotel isn’t completely abandoned after all.

After my visit to the abandoned hotel I continued down the stairs until I came to a pebble beach where I eventually swam and relaxed for a while.

It was a very cool, but also creepy and yet unforgettable experience.

How to reach the abandoned hotel in Dubrovnik?

From the old town you can of course take a taxi to the abandoned Belvedere Hotel. An estimated price for this single ride is approximately HRK 60 (€ 8). It’s possible that this price is not (anymore) accurate.

Walking is of course free and easy to do if you have good mobility. From the old town it is about a 40 minute walk to the abandoned hotel. Provide enough water and rest regularly because of the heat.