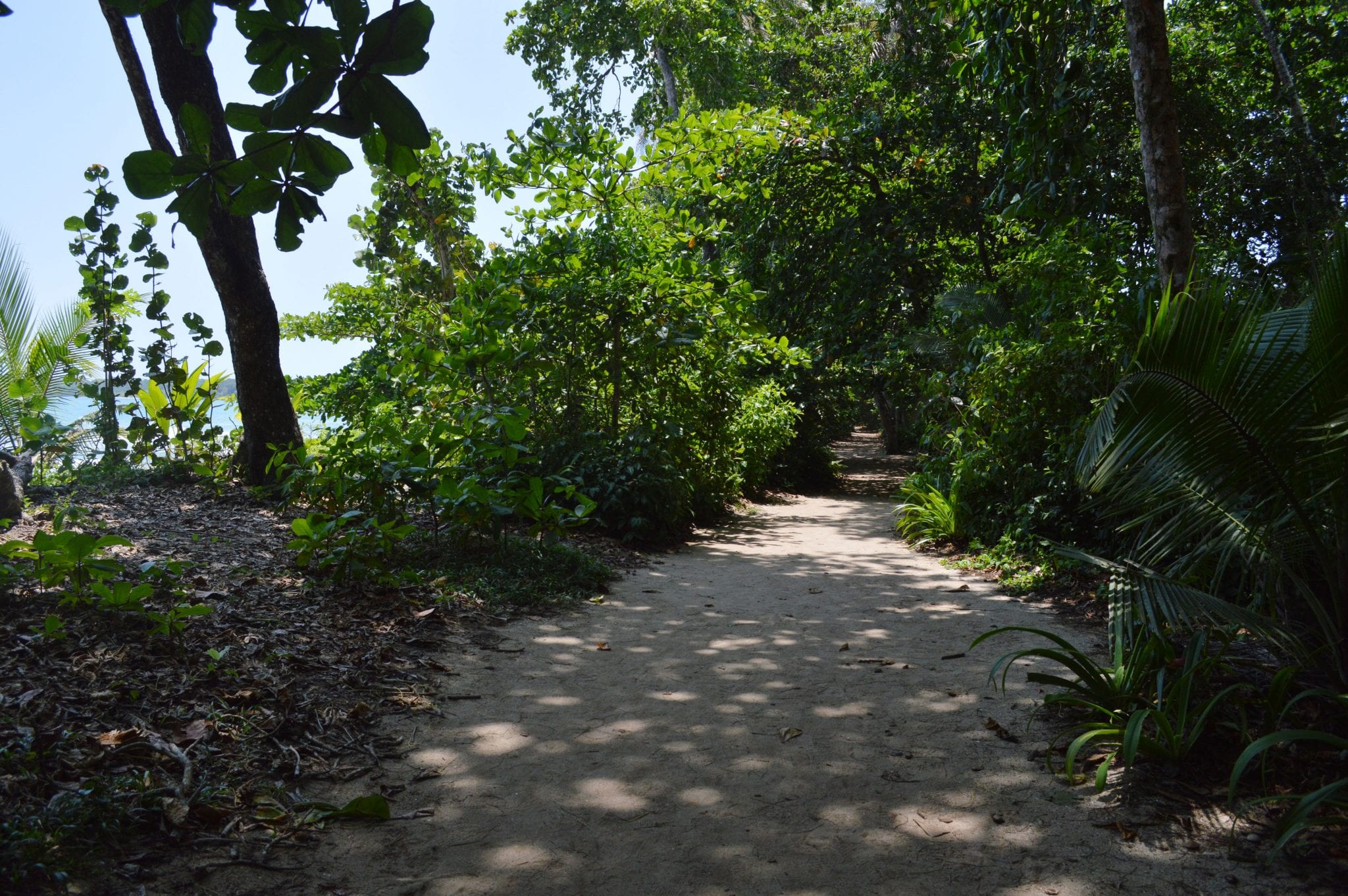 In the Cahuita National Park there are wide sandy paths that clearly show the way. On the left you look out on the white beach and on the right is the dense jungle and a river that eventually flows into the sea. At some point you have to cross a bit of the river (in the dry season this part is fairly dry) to go further into the park.

You can choose to walk through the entire park until you reach the other entrance. Here’s a small bus stop and you can take a bus back to Puerto Viejo. Buses don’t just stop, so you have to wave. I didn’t walk to the end, but turned around and walked back after a short break at Punta Cahuita.

In the Cahuita National Park you have a great chance to spot different kind of animals. I’ve spotted several species of monkeys, sloths, lizards, iguanas, basilisks, squirrels, spiders and a small bright yellow snake. While walking through the jungle, I heard the howler monkeys roar and saw them swinging through the trees moments later. Wonderful to see!

I also encountered capuchin monkeys several times. Unfortunately, some tourists lured them in by throwing chips on the beach. This is of course very bad for the health of the monkeys, but they can also become very cheeky and even aggressive in the end, something the park rangers would like to avoid. Don’t give the animals any food at all times.

Visit the national park early, for the best chance of spotting wildlife.

In the park you can entertain yourself for a whole day easily. It opens from 6am to 5pm. The park rangers recommend leaving the trails at around 4:00 PM as it starts to get dark at 5:30 PM.

The entrance fee to the park consists of a voluntary contribution.

Costa Rica has many fantastic national parks. During my tour of Costa Rica, I visited a number of them, including the Monteverde Cloud Forest Reserve and Manuel Antonio National Park.

You can visit Costa Rica well all year round. The best time to travel to Costa Rica is in the dry season from approximately December to April. In the rainy season, nature may be at its best, but take into account a heavy rain shower about every day.

How to get to the Cahuita National Park?

The Cahuita National Park is very easy to reach from Puerto Viejo by local bus. The first bus from Puerto Viejo leaves at 5:30 AM. Bus tickets are 750 Colon and after about half an hour you arrive in Cahuita; a cute, quiet village. There’s a small supermarket at the bus station in Cahuita, if you want to buy some food and drinks. From the bus station it’s about a 10 min walk to the entrance of the national park.