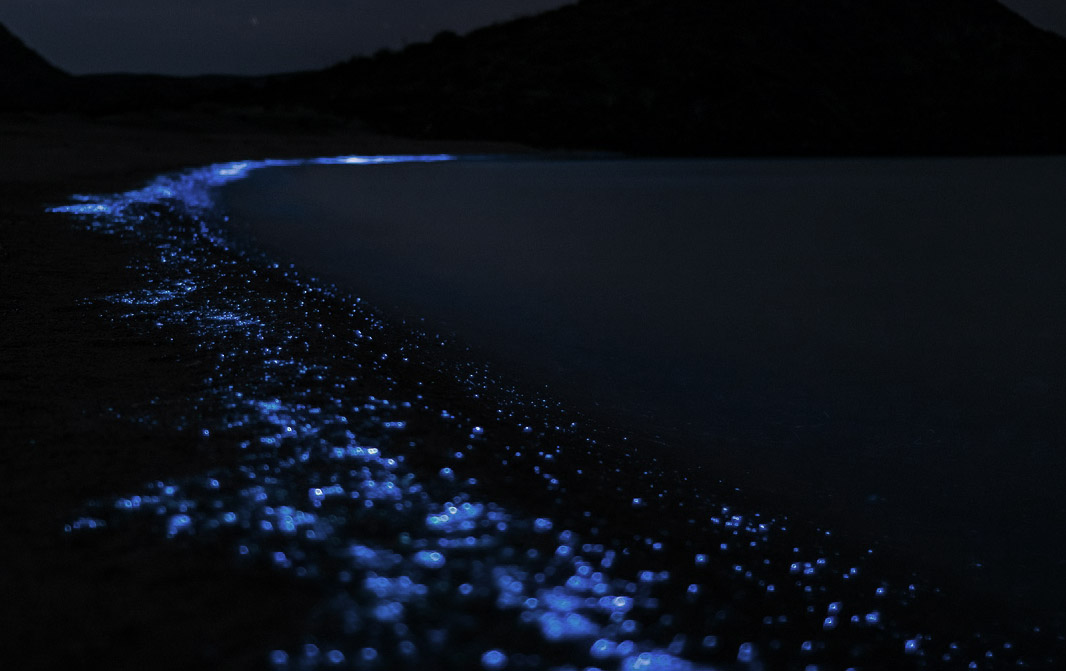 Swimming with Bioluminescent Plankton in Cambodia

“Swimming with Bioluminescent Plankton”. That sounds pretty cool, I thought when I saw the tour information during a beach walk. I was on the paradise island of Koh Rong Samloem in Cambodia for a few days. For only $ 10 I could swim with luminous plankton in the evening. I will do that.

According to several people I spoke to, it would be dark enough that same day because the moon wasn’t visible. And the less light, the better. That promises a lot!

However, the tour didn’t start completely smoothly. We left way later than planned and first sailed to the other side of the bay to pick up a few tourists while the boat’s engine stopped regularly along the way. I was almost convinced that this was going to be a total flop.

When everyone was picked up, we sailed so far from the coast that at a certain point you could no longer distinguish between the sky and the water. Everything was black!

After about 15 minutes of sailing we stopped, we got snorkel masks and were allowed to jump into the water. That was quite frightening, because it was pitch black! I saw nothing at all. My fear of scary fish nibbling on my toes was greatly fueled.

The boat’s lights went out and everyone on the boat was a bit uncertain as the guide tried to encourage us in broken English. I first let a few other people go into the water before going in myself. I soon heard them make enthusiastic sounds to each other and to us. Maybe it’s not a flop after all and I decided to jump into the water with my snorkel mask too.

I looked underwater and saw nothing at all, except darkness. But when the guide told me to move while looking underwater I saw it! Glowing white bubbles formed after my movements. How cool! When my eyes got more used to the dark, the more I saw it.

For about 15 minutes, I was kicking my legs and waving my arms while looking underwater with my snorkel mask. It took only a short time to light up the plankton, because as soon as I stopped the big movements, I only saw the darkness beneath me. As long as I kept moving, I saw the plankton light up. It was even quite tiring!

I tried to take photos and videos with my actioncam, but unfortunately they failed. The image was completely black! However, I can add a nice picture of the beautiful Saracan Bay on the island of Koh Rong Samloem, from where I did this tour.

I had expected something different in advance. On the internet I saw all photos and videos of blue colored luminous plankton that light up at the slightest. But this plankton was more white and was not clearly visible from the boat at first, except for very large movements. Nevertheless, I thought it was a great experience and I would like to experience it again!

When I traveled in Indonesia, I went camping a few times with friends on uninhabited islands and also saw the amazing plankton!

Sometimes plankton can even be seen on the beach. If you’re lucky, you can see this on some beaches on Koh Rong Samloem and on Koh Rong. Such as Sunset Beach and Lazy Beach on Koh Rong Samloem where there are few accommodations. However, this is only possible when it’s completely dark. That means no lighting from the hotels and restaurants in the area, but also no light from the moon.